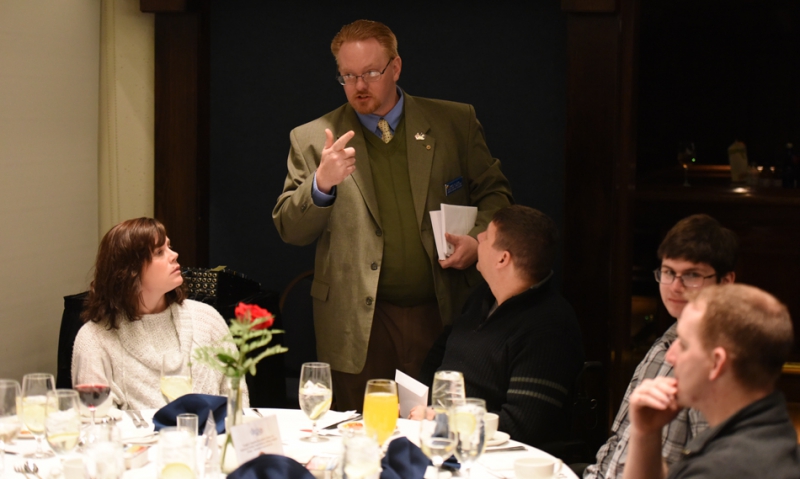 A 2012 double explosion in Afghanistan sent Army Spec. Ceci Loren to Walter Reed National Military Medical Central for spinal surgery that placed a prosthetic disk in her back. It also put her in contact with the Aleethia Foundation’s weekly dinners for Walter Reed patients – and proved to be a life-changing experience.

Loren and her husband were two of the approximately 80 Walter Reed patients, their families and other guests who were treated to an American Legion-sponsored Aleethia dinner at the National Press Club’s First Amendment Room on Feb. 20. The Legion’s Operation Comfort Warriors, a program designed specifically to help recovering servicemembers, provided the dinner.

“We wouldn’t choose to be anywhere else than here,” said Loren, who will be medically retired this year. “We’ve been coming to these dinners for two years, and it’s like coming to dinner with your family. You get so close to everybody in the room. My week pretty much doesn’t fill like it’s ended if I haven’t gone to one of these dinners.”

Aleethia founder/executive director Hal Koster started the dinners in 2003 at his D.C. steakhouse Fran O’Brien’s. He founded the Aleethia Foundation a few years later; after his steakhouse closed, he kept the dinners going at other restaurants.

“Nowadays, there’s not that many that are newly injured. There’s guys that are coming back to get adjustments on their prosthetics. There are cancer patients. And (Walter Reed) has the Nation Intrepid Center of Excellence which (treats traumatic brain injuries and post-traumatic stress disorder). With PTSD and TBI, you need to get the guys out because they’ll isolate themselves. They will go away from society.”

The Legion has been involved since the start of the dinners, and in each of the past few years, OCW had sponsored four quarterly dinners. In addition to appetizers, and steak and seafood dinners, the Walter Reed patients also got Amazon gift cards and OCW caps. And two attendees won two Samsung Galaxy tablets in a drawing.

“It means a lot to us seeing the families come out and have a great meal with other families going through the same thing,” said OCW Director James Ellison. “It’s very rewarding to see all the children of these wounded, injured and ill servicemembers men and women … and help their children deal with the same things their parents are dealing with on that different level. The family part of this is absolutely critical to the best outcomes for the patients as well.”

It’s made a difference for Loren. “(These dinners) were pretty much our salvation,” she said. “We didn’t do anything. We didn’t go anywhere. And then we came to our first dinner and that became what we looked forward to every week.”

For Koster, a Vietnam War Army veteran, the dinners have been therapeutic as well. “Right now, (the dinners) are absolutely wonderful,” he said. “When we first started them, it was extremely painful. I’m a Vietnam veteran, and it brought back a lot of memories that I didn’t really want to come back. When we first started doing the dinners it was probably six months before I had a good night’s sleep again. Now, it’s great.

“These are all wonderful people. Their attitude and approach to life is just so far superior to what you see in general public. They’re just going on.”