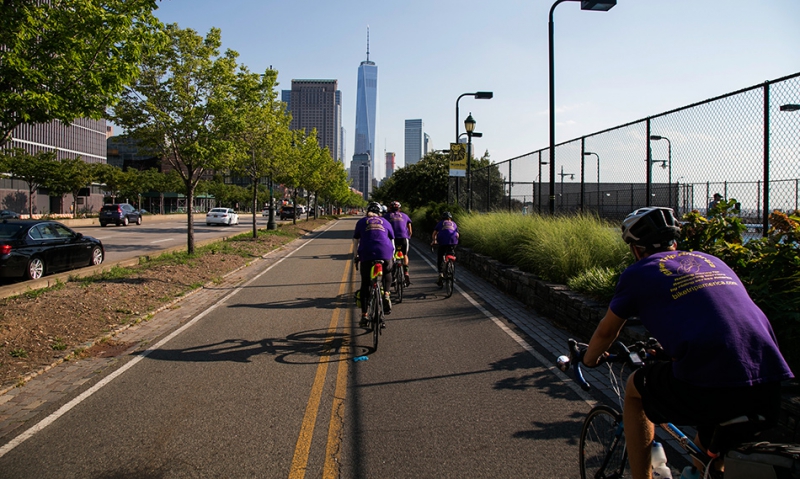 Members of Bike Trip America ride on a bike path in New York City, making their way to the One World Trade Center site on the final day of their cross-country bike ride for Operation Comfort Warriors. (Photo by Andrew Lamberson)

For 59 days this summer, three teenage Boy Scouts and a Vietnam veteran rode their bikes across the entire country on a mission to provide comfort for a select and important few.

On Aug. 15, that mission came to a successful end, as the crew of "Bike Trip America" arrived at One World Trade Center in New York City after starting June 18 in Astoria, Ore., and pedaling 3,600 miles along the Canadian border to raise nearly $20,000 for the Legion's Operation Comfort Warriors (OCW) program.

The group originally set a goal of $10,000 in donations for OCW - the Legion's flagship charity which provides comfort items to wounded warriors at VA medical centers and military medical facilities. But, thanks in large part to the generosity of Legion family members they met along the way, the Bike Trip America team was able to almost double its target amount.

"I thought we’d make (the goal), but I didn’t think we’d make as much as we have," said Bryce Nurding, Bike Trip America organizer. "The Legion’s support and how planned out the trip was was crucial."

Nurding, who turned 17 during the course of the 59 days, mapped out the trip and organized the group, which consisted of Nurding, 70-year-old Vietnam veteran Don Child, fellow Boy Scouts Jonathan Williams and Ryan Tallman, and "support car" driver Pat Wollner. They began at the shores of the Pacific Ocean in Oregon and rode through the Pacific Northwest, the upper Midwest, the Great Lakes region, and eventually into New York state, averaging about 70 miles each day and reaching elevations as high as 5,500 feet.

On the morning of Aug. 15, before a collection of Legion family members and local dignitaries, they dipped their tires into the Hudson River in Beacon, N.Y., signifying the culmination of their coast-to-coast journey. Then, they rode down state through the hills of lower New York and into the city, where they were escorted by an NYPD cavalcade to the Ground Zero site. They were met there by a welcoming party consisting of National Commander Michael Helm, Past National Commander Fang Wong, leading candidate for 2016-2017 national commander Charlie Schmidt and Legion family members from the tri-state area.

They were given a $1,000 donation from Lt. B. R. Kimlau Chinese Memorial Post 1291 located in New York City's Chinatown, and their bikes were shipped back to Oregon free of charge by Chris Nolte, a local Iraq-Afghanistan veteran who owns Propel Bikes in Brooklyn. Each member was also presented with a plaque recognizing the achievement.

"It’s nice to see how the trip really flowed," Child said. "Every day we met our goals as far as distance and everything. In that sense, it was almost too easy. It was almost enchanted."

Nurding mapped out the trip strategically so that the team would frequently stop at, or near, an American Legion post, beginning with Astoria Post 12 in Oregon. Post 12 helped charter the trip and launched the fundraising efforts with a $1,000 donation. Nearly $4,000 in donations poured in at Post 215 in LaGrange, Ind.

Even when posts or Legion family members couldn't donate, they were quick to offer support in the form of warm showers, food, fellowship, and a roof for the team to sleep under.

"(The Legion has) been really helpful and really, really awesome," Tallman said. "I don’t know how much further we could have gone without them. They’ve been really great. They’ve let us sleep in their posts even if there was nobody there. They would let us stay there and feed us, and give us showers."

The Bike Trip America team was blessed to have only a few nicks and bruises, minor mechanical failure and cooperative weather throughout the whole trek. The trip moved along with unexpected ease, Child said, allowing them to get a more "granular" and intimate tour of the country.

"I think the biggest surprise has been that everywhere you go, the people, even if you would never associate with them outside of the bike trip, have been absolutely marvelous, open-hearted, wanting to have conversations about what we are doing and why," said Child, who wrote about his experiences almost daily on his blog. "To me, that’s probably one of the biggest surprises and a very welcome surprise."

Child, who was a combat medic in Vietnam, says he agreed to serve as the adult mentor of the trip as an homage to his late father, who often invited kids from the city and other countries to spend a summer at the family's cattle ranch during Child's youth. He says that, through his father's mentorship, many of the summer transplants became extended members of his family.

"I have always missed that in my own life, having an extended family," Child said. "In a sense, I think that each of the kids on the ride has become part of my family, along with Pat (Wollner). She is like a sister to me."

When Nurding was first planning a cross-country bike trip in the spring, he took on OCW as a beneficiary charity after a suggestion from Legionnaires at Post 12. At the time, he says he knew nothing about the Legion or OCW, but now he says both have taken on greater meaning to him.

"I didn’t know anything about the Legion before the trip," Nurding said. "Now, I think it is a great organization."