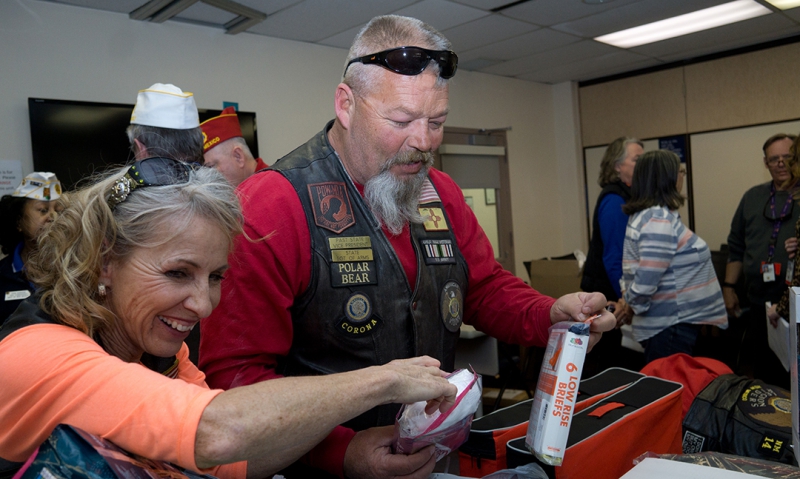 The American Legion’s Operation Comfort Warriors (OCW) program recently awarded its largest grant to a VA medical facility in nearly two years. The $10,000 grant was provided to the New Mexico VA Health Care System in Albuquerque on March 3 to help meet the needs of its veterans.

“Anything to help veterans is what we are all about,” said Aaron Dean, a Legion Rider and member of Post 80 in Grants, N.M. “Our belief is veterans helping veterans. And that’s what made (the donation) so awesome … everybody working together to get something done for our veterans.”

The grant fulfillment will aid the main hospital, two satellite care clinics, a regional post-traumatic stress disorder resident care clinic that supports veterans from four nearby states, and the Henderson House, which is a transitional living center for homeless women veterans and their dependent children. Items purchased included health and hygiene products, clothing, Amazon gift cards, and recreational equipment such as a ping pong table, ladder ball game, disc golf and board games.

Don “Butch” Harrison, who volunteers at the New Mexico VA and is a member of the Legion’s Veterans Affairs & Rehabilitation Commission, said donations to the hospital have been down so the OCW grant was “very important ... and will make a positive impact on the veterans.”

Espinoza said he was “proud to be a part of the grant” and also remarked on the need for donations – especially to the Henderson House which relies on donations as a nonprofit. The OCW grant helped purchase nearly $2,700 of health and hygiene products for the facility.

“With The American Legion Operation Comfort Warriors coming through, that will really help out a lot for those female veterans living there,” Espinoza said. “The Henderson House staff were very happy and honored that The American Legion gave those comfort items that they needed.”

And for the items donated to the New Mexico VA, Espinoza said the staff were once again appreciative that the Legion supported them with another OCW grant to help the veterans in the community. “They are very happy and honored to have The American Legion stand by the veterans at the VA hospital," he said. "They spoke of how The American Legion is needed in communities.”

Dean agreed that The American Legion and its programs are important to communities nationwide.

“Anytime there is an opportunity to help veterans, we are going to be there,” he said. “OCW is really helping veterans all over the country. It’s a great program.”