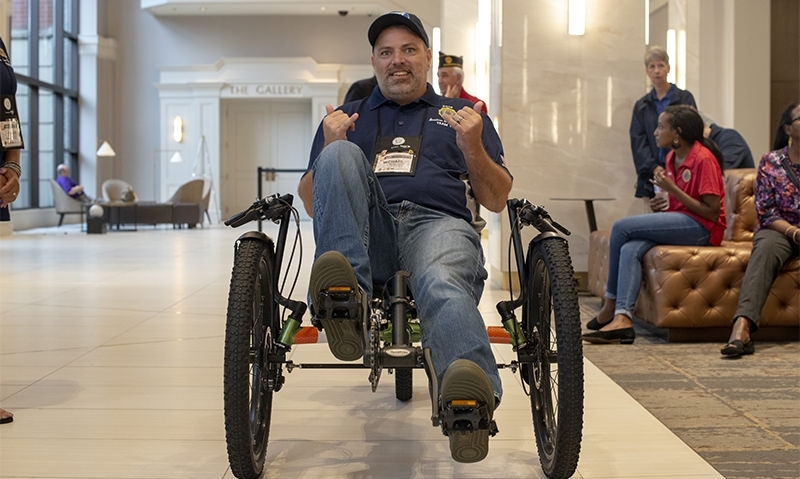 Michael Bacon tries out the new trike given to him by Operation Comfort Warriors during the 100th National Convention in Minneapolis. Photo by Schelly Stone/The American Legion

When U.S. Army and Air Force veteran Michael Bacon saw some the events planned for him during his visit to The American Legion National Convention in Minneapolis, he was pretty amazed. But experiencing it was even better.

Bacon, who suffered a moderate traumatic brain injury during an IED explosion in Iraq in 2006, was the recipient of an American Legion Operation Comfort Warriors grant. He and his wife, Alicia, were flown into Minneapolis, where they attended a renaissance festival and a Minnesota Twins game.

“When I looked at what was scheduled, it already seemed pretty amazing,” said Bacon, a Fort Worth, Texas, resident. “But it exceeded that. It amazed me how large-scale this is.”

They also took part in the annual national convention parade, attended a luncheon and got a chance to meet with The American Legion Youth Champions. The latter was a memorable experience for Alicia.

“That was really special,” she said. “To be able to talk to those teens and learn about them, and then for Michael to be able to tell the some stories, was really incredible.”

Michael, who suffers from seizures and PTSD, got an added bonus on Aug. 25 when he was presented with a $2,500 custom-fitted all-terrain trike. The trike will allow him to resume riding with his 14-year-old daughter.

“After you suffer an injury like mine, getting help can sometimes be difficult,” Michael said. “But for an organization to come to me and say, ‘What do you need?’ is incredible. It’s really hard to describe how that feels. I can continue living the life I want to live, the life I had before I was in the military.”

Operation Comfort Warriors has provided $247,000 in grants to veterans like Bacon, as well as to Departments of Veterans Affairs and Defense facilities throughout the country, in 2018.

“We are committed to do more,” said Bruce Drake, The American Legion’s assistant director for Troop and Family Support. “We can’t do it without the assistance from the volunteers … who go out and find the veterans who can be assisted individually, or go to VA and DoD hospitals and ask, ‘What can we do to help you guys?’”

Alicia said the trip to Minneapolis has opened up her eyes about The American Legion. “I had no idea just how large their impact was and what they did,” she said. “Everything they’ve done for us, and the things they do for other people, it’s amazing. They change lives.”