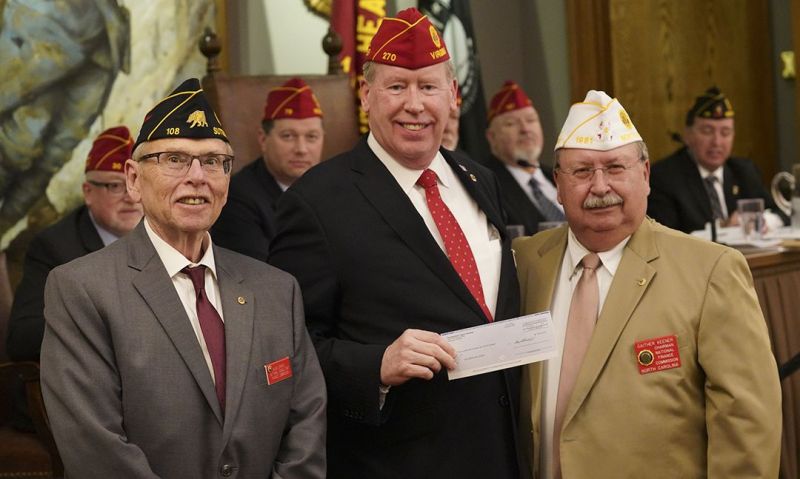 Several American Legion Family members presented more than $1.2 million in donations during the National Executive Committee meeting's May 8-9 in Indianapolis, as well as the Sons of The American Legion's meetings May 4-5. The donations will support American Legion programs that benefit servicemembers, veterans, their family, and children and youth.

Operation Comfort Warriors (OCW) – $74,875. The Sons of The American Legion provided $14,000 in donations, while the Department of Indiana provided $60,875. Of Indiana's amount, more than $47,000 came from Kenneth N. Dowden-Wayne Post 64 in Indianapolis, including $4,550 between its Sons of The American Legion squadron, Legion Riders chapter and Auxiliary unit. Past National Commander James E. Koutz presented the checks for OCW, which provides comfort items and rehabilitation equipment to wounded veterans and servicemembers.

National Emergency Fund (NEF) – $29,760. Donations included $15,706 from the SAL, $7,500 from Post 270 in Florida, and from the Departments of Alaska, Mississippi and Oregon. Since January, the NEF has provided $56,125 in grants to 20 American Legion members and three posts affected by natural disasters within the Departments of California, Florida, Georgia, Kentucky, Nebraska, North Carolina, South Carolina, Tennessee and Wisconsin.

Child Welfare Foundation – $119,388. The SAL provided $112,813 in donations; other donations came from the Departments of Mississippi and Florida. CWF provides grants to nonprofit organizations for projects that contribute to the physical, mental, emotional and spiritual welfare of children. SAL's CWF donation brings their total for the year to $365,142, which is 107 percent of their goal. The SAL is the largest contributor to CWF, donating more than $8 million.

Veterans and Children Foundation – $3,942. Donations from the SAL and the Department of Oregon. This is National Commander Brett Reistad's primary fundraiser. Donations to this foundation support The American Legion's Temporary Financial Assistance program and Veterans Affairs & Rehabilitation efforts, primarily training for the 3,000 American Legion service officers who work to help veterans and families understand their health-care benefits, education and employment opportunities at no charge to the veterans and their families.

Temporary Financial Assistance – $1,013,086. Donations came from Departments Alaska and Louisiana, as well as a $750,000 donation from the Child Welfare Foundation Board of Directors and $250,000 from American Legion Charities, a nonprofit trust fund that directs donations to programs and services of the organization. The American Legion's Temporary Financial Assistance program provided more than $1 million in grants to Coast Guard families affected by the government shutdown in January.