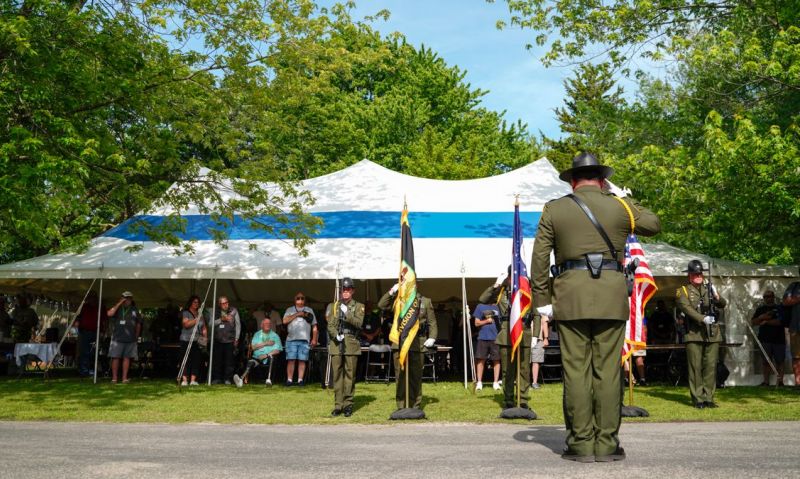 “It’s been pure hell,” said the 41-year-old Sage, who deployed 10 times to Iraq and Afghanistan as part of the 101st Airborne Division and 3rd Ranger Battalion. “It has been a rough transition. I was not ready to be retired. Losing the connection, that brotherhood, was very tough for me. When I got out I was dealing with a lot of pain – physical and mental. I started using alcohol and prescription drugs poorly to cope with that stuff, and really struggled for about two years.

Sage is in a better place now, but continuing on that road means connecting with fellow veterans, something he is doing this week in Northern Ohio. He’s one of more than 100 wounded veterans in Marblehead, Ohio, spending three days fishing Lake Erie as part of the eighth annual Walleyes for Wounded Heroes event. Sage joined veterans from Kentucky, Illinois, West Virginia, Indiana and Ohio for four days of angling with professional charter boat captains and, perhaps more importantly, interacting with fellow veterans injured in service.

“The greatest thing about the military was those bonds that were built,” Sage said. “This is a fun event that you can connect with other veterans that have been through similar situations.”

Priority for participation in the event is given to Purple Heart recipients, while veterans rated 50-percent disabled or higher by the Department of Veterans Affairs, and those veterans with a DD-214 showing a debilitating injury occurring in training or other non-combat operations also are eligible to attend.

Veterans pay nothing to participate in the event, thanks in part to The American Legion providing grants to Walleyes for Wounded Warriors since 2014. The grants have grown in size over the years; this year’s grant of $16,000 will cover the cost of lodging for the veterans, as well as breakfast and lunch each day.

“Honestly, we wouldn’t be here without The American Legion,” said Charles Reed, director of the event co-sponsor Kentucky Wounded Heroes. “We would have maybe 12-15 folks here. We’d continue on, seeking our own lodging and trying to get breaks – maybe 10-, 20-, 30-percent off meals and so forth. Without the Legion, we would not be here at this location, I’ll tell you that.”

The veterans arrived June 19 at Little Ted’s Cottages and Family Resort and were treated to a dinner of more than 100 pounds of fried perch and walleye caught in Lake Erie. The opening ceremony included a color guard for the Ohio Department of Natural Resources Division of Wildlife, honoring a Gold Star family and the recognition of the POW-MIA table.

For U.S. Army veteran Jimmy Cantrell, who received a Purple Heart after being injured in Operation Just Cause in Panama and went on to serve in Operation Desert Storm, the weekend is a chance to connect with other veterans. In just the first few hours Cantrell already felt the trip from Kentucky was worth it.

“What’s made me impressed is the people, the attitude, the thankfulness, the appreciation and everything they’ve put forward to do this,” he said. “It’s just the encounters with the people: being able to talk to them and have (similar) stories).”