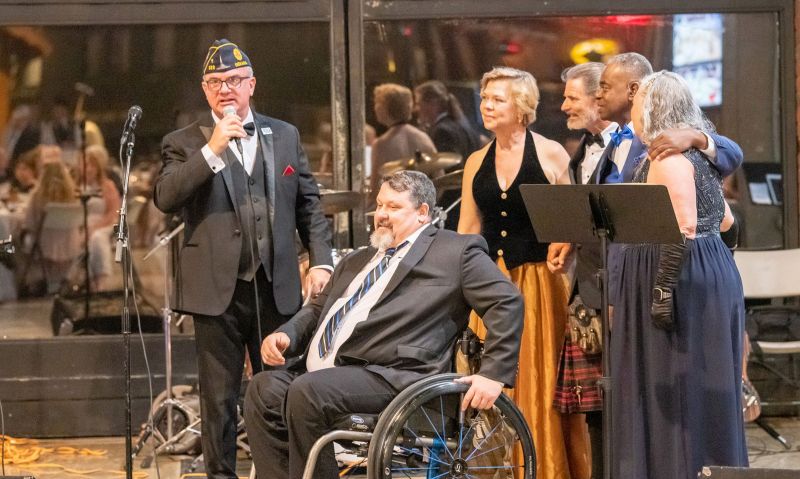 In June, members of local chapters from all over the nation came together at Sacramento State in California for the 2022 Team River Runner (TRR) Adaptive Paddling Conference. For five days, they received classroom and hands-on training to assist disabled veterans through TRR programs.

Team River Runner received grants from other entities to conduct the training, but like many other nonprofits, the pandemic has put a strain on their fundraising efforts. So when it came time to budget for meals for the participants, money was tight.

But thanks to an American Legion Operation Comfort Warriors grant of $10,000, three meals a day for five days were provided to around 45 people attending the conference.

“We were, let’s say, a little concerned about providing decent food for all of the participants,” said Phil Sayre, TRR’s vice president of its board of directors. “The American Legion got us out of a pinch. Like a really pretty serious pinch. We are super grateful.”

Team River Runner has chapters throughout the country that provide events, fundraisers, paddling sessions and pool sessions for veterans with any disability and their family members. The goal is to provide whatever the veteran needs: adventure, healing or purpose.

The June clinic was “designed to teach Team River Runner participants and also those who are in our 65 or so local chapters around the country how to work with vets of various sorts,” Sayre said. “How do you deal with a vet that is blind, either partially blind or fully blind? How do you deal with (traumatic brain injury) and post-traumatic stress disorder, with limb loss? Those kinds of issues, along with basics – CPR, how do you rescue somebody on the river with throw ropes – all of these things come into play in this national clinic that we just had.”

California Legionnaire Brian McGuinness, who recently finished off terms as both Post 233 commander and California District 6 commander, said it was a chance meeting that connected TRR with The American Legion and Operation Comfort Warriors. During a California Area 1 meeting at Rago-Christopher Post 165 in Vacaville, a Team River Runner representative came into the post to request support for his organization.

“We had a conversation, and I invited him to dinner that night,” McGuinness said. “I spoke with him some more, and we then invited him to my district meeting, which was the following Saturday.”

It was at that meeting that Sayre learned about Operation Comfort Warriors. “We went to (Post 233) to see if there was some kind of help that The American Legion could provide,” he said. “We gave a little short presentation. Brian came up and suggested OCW … and that’s what I did.”

McGuinness made Operation Comfort Warriors his official program while district commander. Last May, he organized the 6th District’s Armed Forces Ball at the California Railroad Museum to benefit OCW. It was during the ball that Douglas Chace, a Membership Engagement Coordinator and OCW’s coordinator at American Legion National Headquarters, presented TRR representatives with the $10,000 check.

McGuinness said he chose OCW as District 1’s official program in part because of his background as a combat medic.

“Combat medics all promise to leave no one behind,” he said. “The American Legion is how I keep that promise. By doing this, I was leaving no one behind by pushing (the Team River Run grant) through.

“I do a lot of work with stand-down programs … and through that I’ve had a chance to visit the VA hospitals and transition units. I know the damage our brothers and sisters have coming home. Sometimes it’s physical, but more often it’s psychological. And when you add physical trauma to psychological, you have a damaged soldier, Marine, sailor (or) airmen. It’s our responsibility to make sure they’re right and pick up where the U.S. government can’t carry it all out. It’s our responsibility as Legionnaires to finish the mission and take care of our brothers and sisters.”