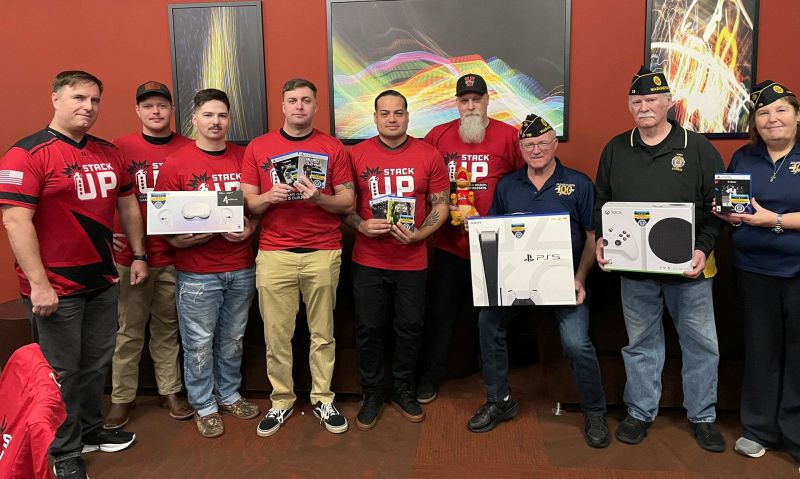 Around a year ago, the nonprofit Stack Up headed to Fort Campbell, Ky., to help update the base’s Warrior Zone, a facility that includes a gaming area for servicemembers on the base. It was right in its wheelhouse for Stack Up, which among its other programs promotes positive mental health through gaming.

Stack Up founder/CEO Stephen Machuga said when U.S. Army Forces Command learned of his organization’s effort, it requested similar visits to other bases. One of those visits came in early December and included a nice boost from an American Legion Operation Comfort Warriors (OCW) grant.

When it visited Joint Base Lewis-McChord (JBLM), Stack Up brought with it some Department of Washington Legionnaires, as well as $29,500 worth of equipment purchased through the OCW grant.

Machuga, who was a guest on The American Legion’s Tango Alpha Lima podcast, said he’s developed a relationship with fellow gamer Doug Chace, who administers OCW at American Legion National Headquarters. That relationship includes referring veterans to each entity, when appropriate.

“A couple years ago (Chace) kind of caught wind of what we were doing,” Machuga said. “He said, ‘You know what? I get all kinds of requests for Xboxes, Playstations and stuff like what you do. Do you want me to send those people over to you and we can work something out?’

“From then on out, anytime he got a request … that was gaming related, he would send them to us. And if we would get a request that was non-gaming related … we gave it to him. And over the years we did more and more together.”

Machuga, a member of American Legion Post 283 in Pacific Palisades, Calif., said he told Chace the visit to JBLM, “would be a great opportunity for (the Legion) to get involved. So we bought a bunch of stuff, the latest and the greatest, and brought it up to their Warrior Zone, took a bunch of Washington (Legionnaires) and had a great day there.”

Also in December, an Operation Comfort Warriors grant of $4,950 provided food and drinks for those attending an Indianapolis screening of Irreverent Warriors’ movie “The Hike Back Film.” Irreverent Warriors provides a community for veterans across the nation through local therapeutic events, as well as works with other veteran organizations who provide services such as job placement, training, housing, service dogs and more.