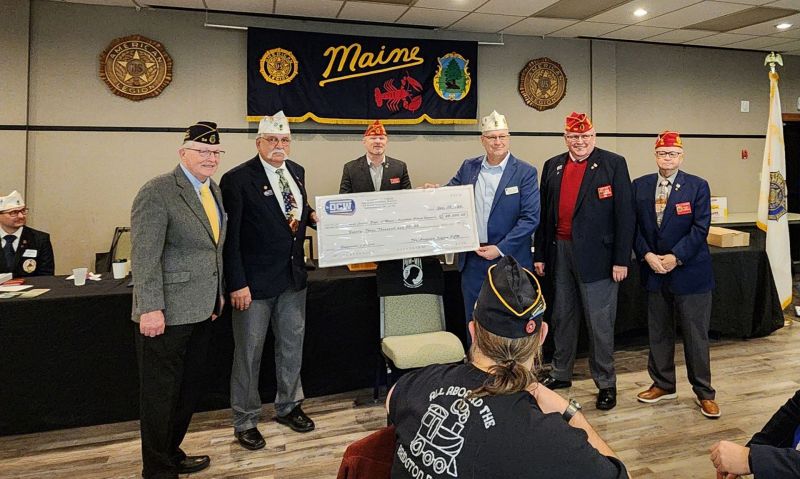 When he was elected commander of the American Legion Department of Maine last summer, Kirk Thurston made fundraising for Operation Reboot Outdoors (ORO) his Commander’s Project. The nonprofit is comprised of veterans and registered Maine guides and provides recreational healing to active-duty military, veterans and law enforcement through outdoor activities such as hunting and fishing.

Thurston didn’t set a dollar amount as a goal, rather stressing that “any little bit would help” ORO’s mission. But Thurston’s project got an unexpected boost during the department’s Mid-Winter conference in January, when the commander was presented with a $43,000 check from The American Legion’s Operation Comfort Warriors program.

The grant was a surprise, arranged behind the scenes by Maine Alternate National Executive Committeeman Matt Jabaut and members of the department headquarters staff. Thurston was stunned when he was presented with the check.

“I’m not one to be speechless normally. It blew me away,” Thurston said. “I couldn’t say anything. The emotions took over. “It was great that (Jabaut) and whoever else was involved thought outside the box. We always forget about National’s programs like Operation Comfort Warriors, which is a great, great program.”

Jabaut said he and the others involved in obtaining the grant wanted to do something to allow Thurston’s effort to assist ORO to last beyond his year as department commander.

“A lot of commander’s projects are a one-year thing, kind of like a do it and forget it. It doesn’t have a long-term impact,” Jabaut said. “So the biggest question for me was how we could make his Commander’s Project have a longer impact from a Legion and help standpoint. And then it was, ‘What opportunities do we have within the organization to do that?’ And we were talking and remembered (OCW).”

Thurston said he learned about ORO from a fellow member of American Legion Post 24 in Rumford and then got to know the nonprofit’s founder, Dan Waite, and Waite’s wife Nicole, who serves as its board of director’s president. Thurston found out that his parents had been friends with Nicole’s grandparents, and that her father had gone to the same school as Thurston.

“But what got me was their love for what they are doing,” Thurston said. “There’s no paid employees. They’re all volunteers, and a lot of volunteers are people that they have – I don’t way to say ‘saved,’ but they helped them refocus and find their true north. And as I travel across the state, I’ve found more and more people have been touched (by ORO). It’s heartwarming to watch them operate.”

Unbeknownst to Thurston, Jabaut reached out to the Waites to get a “wish list” of items their nonprofit could use. A grant application with the items was submitted to National Headquarters and approved for the entire amount requested. The grant will allow ORO to purchase a self-enclosed trailer to transport supplies to events, a utility trailer to haul four wheelers or backhaul a harvested moose), and a container to safely store ice fishing traps tents and hunting gear.

“I don’t think any of us were expecting that much to be approved,” Jabaut said. “It was amazing and really impactful for (ORO), and (Thurston) can walk away after his year as department commander and feel good about really making a longer-term difference with (ORO) and in a lot of veterans’ lives.”