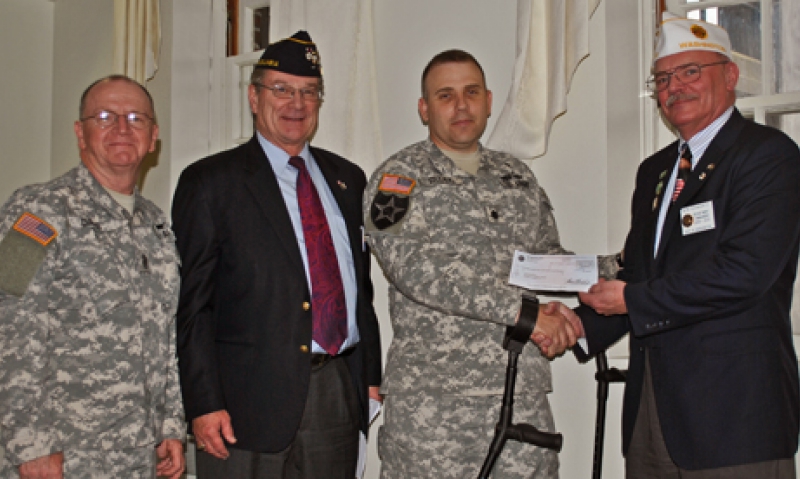 In March, The American Legion's Operation Comfort Warriors program was announced as the overall winner of the Pepsi Refresh Everything Contest. Pepsi awarded a $250,000 grant to OCW - a program dedicated to meeting the needs of wounded military personnel, providing them with comfort items not usually supplied by the government.

Already, the money is being put to good use. American Legion staff members visited Joint Base Lewis-McChord in Washington state for an Operation Comfort Warriors distribution effort on Wednesday. The Legion announced that it will provide nearly $29,000 in wounded warrior support items to Fort Lewis. It was OCW's second showing of support for Fort Lewis, which was given biofeedback equipment by the Legion about a year and a half ago. The devices aid in the recovery of PTSD and TBI victims.

The Legion also will provide a comprehensive kiosk-based information system to benefit the wounded warriors and their family members and caregivers, allowing access to all the data needed to take full advantage of appointments, therapy opportunities unit events, social events and community events.

Legion staff members also participated in a family forum discussion, which gave wounded warriors and their family members an opportunity to raise issues that face them and their families. Legion officials were able to address those issues with Fort Lewis staff later in the day as they toured the facility.

"The gut feeling is that this was a terrifically successful visit," said Phil Riley, director of the Legion's National Security and Foreign Relations Division. "We were welcomed and before we actually started the business end of the trip, we were thanked for the gift from a year and a half ago when the Legion's OCW provided a gift of biofeedback equipment, which is very effective therapy for PTSD and TBI victims."

Additionally, it was announced that the Legion will receive office space at Fort Lewis' Soldier and Family Support Center. There, the Legion can house a service officer who will work medical evaluation board cases and physical evaluation board cases for wounded warriors. The service officer will work DoD Disability Evaluation System cases for servicemembers, and represent servicemembers before and during their Physical Evaluation Boards and with making appeals of disability determinations when required.