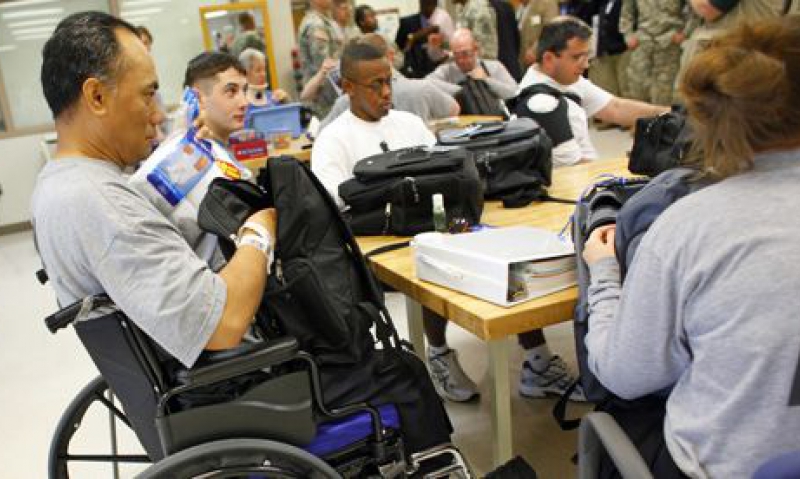 As part of its Operation Comfort Warriors program, The American Legion delivered 50 iPods and 20 Nintendo Wii controllers to the Wounded Warrior Regiment at the National Naval Medical Center in Bethesda, Md., on Oct. 5.

“The controllers will be used by injured Marines and sailors who need to work on regaining their eye-hand coordination,” said Jerry Johnson, the Legion’s representative at the hospital. “It’s been discovered that many such video games are great for improving an injured patient's cognitive functioning. They’ve been very successful in helping traumatic brain injury patients, both here and at Walter Reed (Army Medical Center).

"The iPod “shuffles” were also well received by the servicemembers, which will be loaded with musical favorites chosen by the patients. “Thankfully, many of the younger warriors are familiar with the iPods and know how to use them, because several of the older ones had no idea how they operated."

Joe Grassi, deputy director of the Legion’s National Security and Foreign Relations division, said the Bethesda event was the latest in a series of comfort-item giveaways made possible by the OCW program.

"The American Legion is dedicated to supporting all those members of the military who have suffered bodily harm for the sake of preserving our freedom. This nation owes these warriors a debt of gratitude, and The American Legion is here to let them know their noble sacrifice is sincerely respected and appreciated,” Grassi said.

Started on 2006, OCW provides comfort items (i.e., video games, movies, phone cards, “hoodies”) to wounded servicemembers – things that DoD is unable to provide. “It’s the Legion’s way to keep up the spirits of our wounded, ill, and injured warriors during their recovery,” Grassi said.

Johnson said the hospital’s liaison staff wanted to express their thanks to The American Legion for continuing to support wounded warriors. “They also said that they know we are the ‘go to’ people when something needs to be done.”

OCW has received more than $600,000 in donations, including a $250,000 Pepsi “Refresh Everything” grant that was awarded last March.