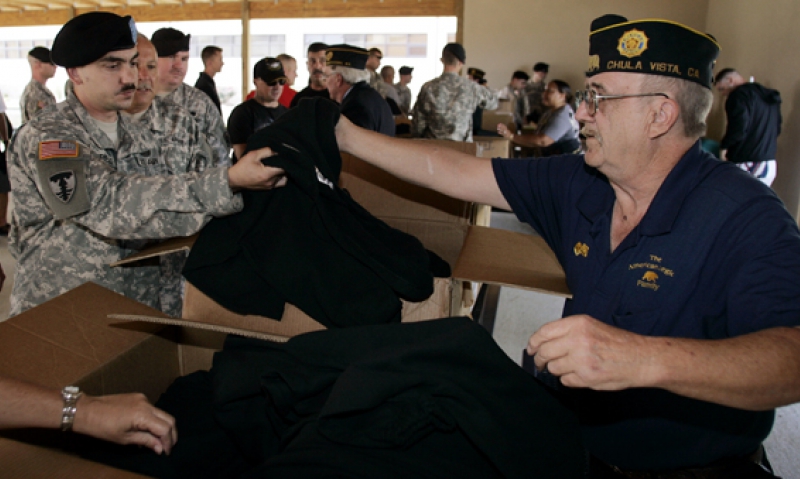 U.S. Army Spec. Andrea Meluzzi has been recovering in the Fort Knox Warrior Transition Battalion for 18 months, after being injured during a 21-month combat tour.

Given a pair of sweatpants and hooded sweatshirt through The American Legion’s Operation Comfort Warriors program, Meluzzi looked as though he’d just been given much more.

“That’s a big morale booster,” said Meluzzi, who also attended the Legion’s Heroes to Hometowns Transition and Benefits Fair last weekend. “The soldiers here need to know people are thinking about them. And it’s good to see veterans helping other veterans.”

Through OCW, 200 pairs of sweatpants and 200 hooded sweatshirts were given to the Fort Knox Warrior Transition Battalion soldiers Aug. 24, while the Legion’s 91st National Convention was taking place in Louisville, Ky.

Jesse Hall, commander of American Legion Hardin Post 113 in nearby Elizabethtown, Ky., presented the clothing items. He hopes to see the soldiers again. On Sunday, Hall was presented with a $5,000 check to purchase additional items for the soldiers. “In the next few months, we’ll find out some more of your need,” said Hall, adding that he and members of his post will return.

Also present at Fort Knox was Legionnaire R. Sunny Farrand, who is based in San Diego but provides Heroes to Hometowns support across the country. “The biggest thing is that our warriors get what they need when they get out (of the service),” Farrand told the soldiers and their families.

Dozens of soldiers were on hand at Fort Knox to receive the clothing.“We’re really pleased to be able to partner with The American Legion as they do what they can to help our warriors,” said Col. Ronald Place, hospital commander in the Warrior Transition Battalion.