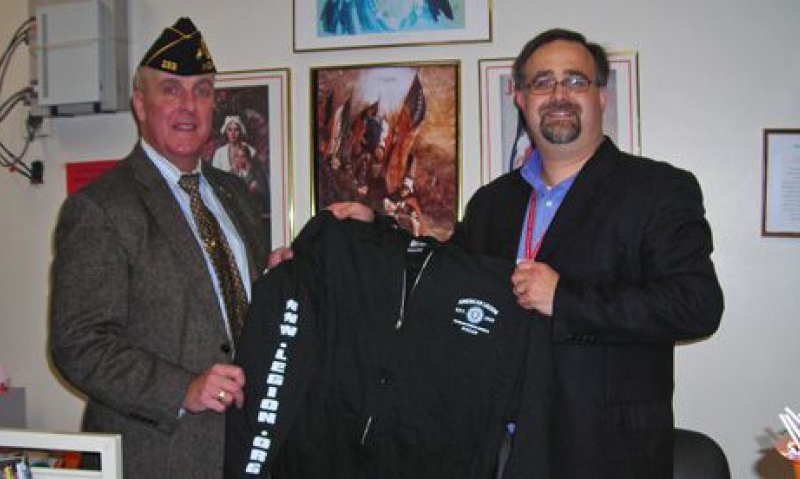 Jerry Johnson (left), American Legion representative at Walter Reed Army Medical Center, delivered 150 sweat suits on Nov. 17 to Wade Waldron of the American Red Cross. The sweat suits will be given to wounded warriors as part of the Legion’s Operation Comfort Warrior program.

Wounded warriors at Walter Reed Army Medical Center in Washington got a special delivery Nov. 17 when The American Legion delivered 150 sweat suits to them, via the American Red Cross. The donation was part of the Legion's ongoing Operation Comfort Warriors (OCW) program, which has raised more than $620,000.

"The Defense Department isn't allowed to provide these kinds of comfort items to the troops, so we try to fill in that gap and deliver sweat suits, CD and DVD players, phone cards, iPods and other items that make their recovery a little easier to handle," said Barry Searle, director of The American Legion's national security and foreign relations division.

Waldron, who knew the Legion had previously donated comfort items to Walter Reed patients, got in touch with Jerry Johnson, the Legion's representative at the hospital. Johnson contacted Searle's staff and they arranged for the delivery through OCW.

"Jerry was sitting in his office, talking to a soldier from Walter Reed's Wounded Warrior Brigade, when a UPS truck pulled up and brought in a dozen big boxes filled with sweat suits," Searle said. The next day, Johnson loaded the boxes into his pickup truck and took them over to Waldron at his Red Cross office. "He thanked the Legion, and said that we were always there for the troops." Waldron handed out the sweat suits to troops at Walter Reed and other military hospitals in the area.

"It may seem like a cliché, but it is still true that there is no higher honor than to assist heroes who have sacrificed so much for our country," Searle said. "Handing out sweat suits and other comfort items to wounded warriors is the Legion's way of making their lives just a little more comfortable."

Searle said that Paul Morin, a past national commander for The American Legion, started a campaign in the spring of 2007 to provide comfort items to recovering troops at Landstuhl Regional Medical Center in Germany; the effort was expanded in 2008. In addition to Walter Reed, the Legion's OCW program will soon include Brook Army Medical Center in San Antonio, Texas, and Fort Lewis, near Tacoma, Wash.