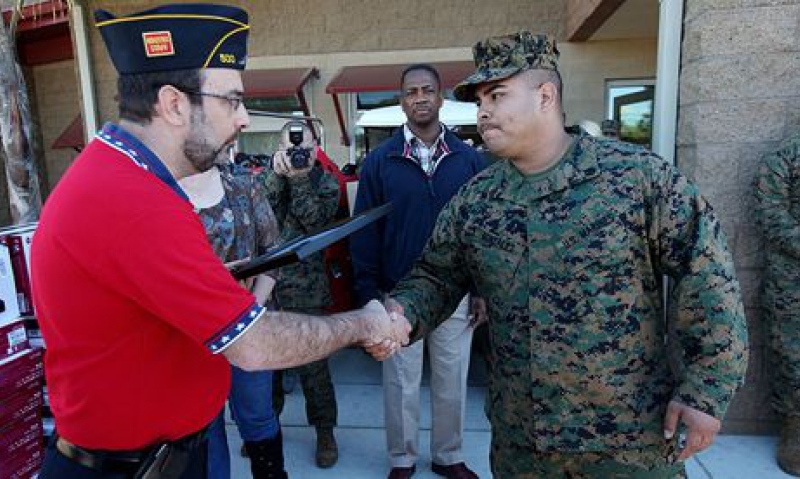 “I feel our veterans, and especially our wounded warriors, deserve the respect and commitment of the American public to give them relief from their injuries. They deserve the best,” said Richard “Sunny” Farrand, a member of Post 434 in Chula Vista.

“I’m still in shock that we were told that we get to keep the DVD players rather than just having them placed in the barracks,” said Marine Lance Corp. Mike Bird, a wounded warrior from Coral Springs, Fla.

Helping veterans is a passion for Farrand, a Vietnam War Air Force veteran who also serves as the Heroes to Hometowns chairman for the Department of California. Farrand spearheaded the purchasing and distribution efforts for the visit, which will be followed up with another OCW visit to Balboa Naval Hospital tomorrow.

The delegation includes Mike Nordmeyer, a Gold Star father from Speedway, Ind. The American Legion Riders of Speedway Post 500 donated $!0,000 to OCW after raising it in a motorcycle ride honoring Army Cpl. Zachary Nordmeyer, who gave his life in Iraq in 2009.

While visiting the Marine Wounded Warrior Barracks at Camp Pendleton, the Legionnaires announced that OCW would also provide cameras and lenses to be used for a photography club there. The cameras will be put to good use, according to Staff Sgt. Richard Gonzalez, of San Jose, Calif.

“A lot of times due to head injuries, PTSD or other disabilities we lose our memories,” Gonzalez said. “Photography and pictures help us regenerate those memories. We can use them as a therapuetic way of journaling.”

In 2004 Gonzalez was wounded in Iraq after being shot five times. He presented the Legionnaires with a photo taken of him and his new “battle buddy,” a service dog. He said that the dog is always “watching my back.”

Gonnzalez said that while photography is a therapuetic art for him, the photography club will “teach a skill that can be used in the outside world to allow Marines to lead a productive life.”

It seemed to be a mutual admiration society, as the Legionnaires thanked the Marines and sailors for their service and sacrifice, while the wounded warriors reciprocated by thanking the Legion for the gifts. “It made my heart happy to see that these Marines really appreciated what we were giving them,” said Debbie Heldenbrand, an Army veteran and member of Post 434. “They have already given us so much.”

More than $70,000 worth of gifts were purchased for the Camp Pendleton and Balboa visits. Since OCW’s inception in December 2008, more than $620,000 has been raised by The American Legion family to provide comfort items to wounded, injured or ill warriors recovering in U.S. military hospitals and warrior transition units around the world. The program won a $250,000 grant after placing first in last February’s Refresh Everything Project sponsored by the Pepsi Beverage Company.