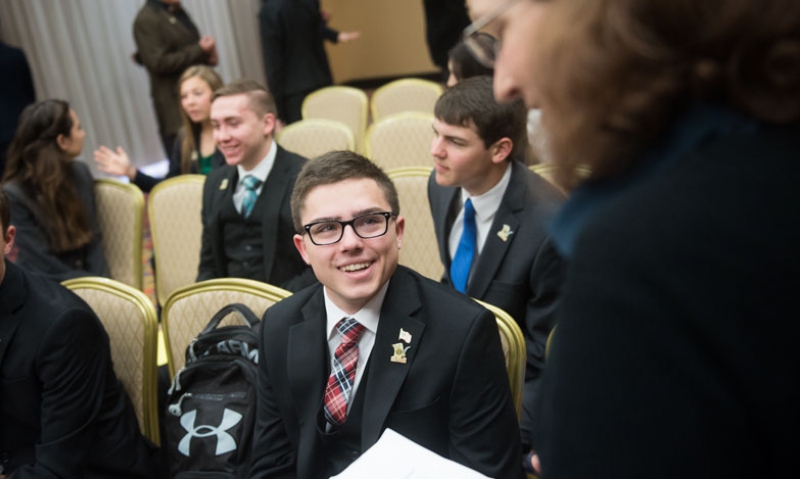 After two rounds of intense competition, youth from Maryland, Massachusetts and West Virginia claimed a spot in The American Legion’s 80th National Oratorical Contest finals in Indianapolis. The three competed against 50 of the nation’s top high school orators, speaking on the U.S. Constitution, and will vie for a first-place finish tomorrow and the top prize of an $18,000 scholarship.

Robyn Anzulis of Woodbine, Md., Andrew Steinberg of Newton, Mass., and Chad Durante of Follansbee, W. Va., will compete tomorrow at 10 a.m. ET; the finals will be streamed live on the Legion’s Facebook page.

All 53 American Legion department-level contestants started the National Oratorical Contest on Saturday morning separated into nine groups for the quarterfinal competition, where they presented their prepared oration on an aspect of the U.S. Constitution followed by an assigned topic discourse – a phase of the Constitution selected from Articles and Sections – in front of judges, Legion members and their family. Anzulis, Steinberg and Durante were among the top nine orators that advanced from the quarterfinals to semifinals in effort to earn a top three spot and a shot at $48,000 in scholarship prizes.

Durante, who didn’t make it past the first round during last year’s Oratorical Contest, took his experience and came into this year’s competition with a fresh new speech – “270 To Win” – and added more movements and reflections in it.

“I didn’t expect to make it this far; I’m shocked and feel like I’m dreaming. I’m really happy to be here,” said Durante, a sophomore at Weirton Madonna High School, who was sponsored by Post 3 in Moundsville.

For first-time competitor Anzulis, a junior at South Carroll High School, practicing all five of her prepared speeches for the past four months and watching online videos of former American Legion Oratorical winners helped her earn a spot in tomorrow’s finals. “I was always amazed at how great the top three (Oratorical finalists) were and now to be one of those … I’m still trying to process it. I am absolutely shocked,” said Anzulis, who was sponsored by Post 191 in Mt. Airy.

Anzulis believes her prepared oration, “It’s Where I Stand,” will set her apart tomorrow since it focuses on a specific aspect of the Constitution – the free speech clause of the First Amendment. “Tomorrow for me is that I made it this far, I’m doing my best, I’m just going to go out there and deliver the message," she said.

It was a “love for speech, politics and our country” that encouraged Steinberg to compete in the Legion’s Oratorical Contest. “They all converged in one opportunity with this competition, and I can say with great coaching and a little bit of luck that I’m happy to have made it as far as I did,” said Steinberg, a junior at Roxbury Latin School who was sponsored by Post 440.

His prepared oration, “The Constitution: A Lasting Legacy,” focused on how each generation passes the baton on Constitutional knowledge and responsibility. As he prepares to deliver that message for the third time tomorrow, he’s just “excited and feels fortunate to have made it this far.”

During tomorrow’s finals, each contestant will present their prepared oration, as well as an assigned topic discourse, in front of a panel of six judges, Legionnaires and family members.