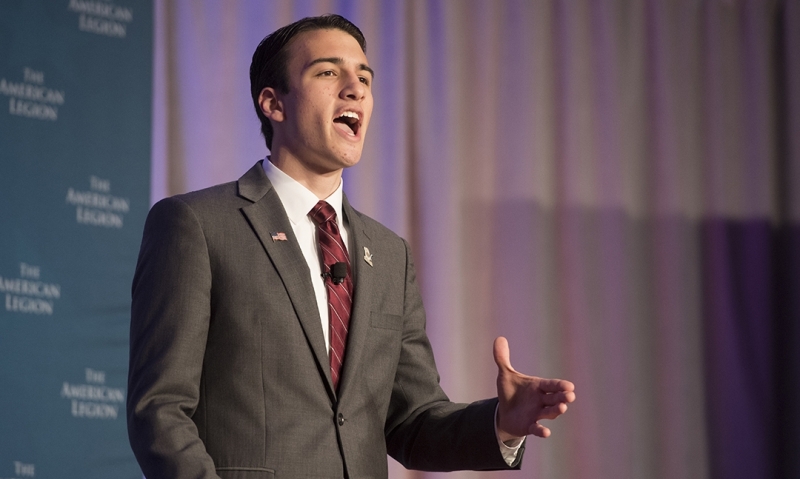 American Legion department Oratorical chairmen gathered in Indianapolis Sept. 28-30 for the 20th annual National Combined Americanism Conference. The focus of their program session was “Back to Our Oratorical Basics.” The chairmen took a test that challenged their knowledge of the Oratorical program such as the history of the contest, contestant participation, contest rules and procedures, and more.

The questions for the test were gathered from The American Legion’s High School Oratorical Scholarship Program, “A Constitutional Speech Contest,” Chairman’s Guide brochure. Many of the answers to the questions brought forth great discussion and served as a good reminder about the rules of the contest.

“We create new leaders. That’s what this contest does,” said Tina Burney, discussion moderator and Department of Georgia Oratorical chairwoman. “Citizenship, duty and responsibility is the underlying thing that we’re trying to get them to understand.”

The following are a few highlights from the test answers and discussion:

Contest outcome dispute. Following the contest, if a teacher or parent of one of the contestants disputes the outcome of the contest and demands to see the judges’ scorecards, indicate that the scorecards are the property of The American Legion and policy dictates that they are not to be released to the public. The decision of the judges is final.

Missed competition. If a contestant cannot compete in the contest at either the post, district or department level for a specified reason, but can compete the following day, conduct the contest as scheduled. And if a contestant competed they cannot do so again. “We had a student who lived on the Georgia-Tennessee line and wanted to compete and did not win (in Georgia) and wanted to go into Tennessee and we said ‘No, you’ve already competed,’” Burney said.

Early graduates. Contestants who have graduated early from high school are eligible to compete as long as they are not enrolled in college, university, trade school or other institution of higher learning.

Placement of judges. Judges should not sit together during a contest. Responses given to this is so they don’t collude, look at each other’s notes and so the contestants have to look at different people in the audience. And contestants should not be told who the judges are and where they will be seated.

Copies of speeches. Contestants may have a copy of their prepared oration in the first holding room.

“Some people question whether or not we should change some of the structure. We have been doing it this way for 83 years. And we have been doing it well,” Burney said. “While National Speech and Debate do it one way, while other organizations do it another way, we do our contest in a way that is now a legacy. It is a legacy of something that we are keeping alive.”