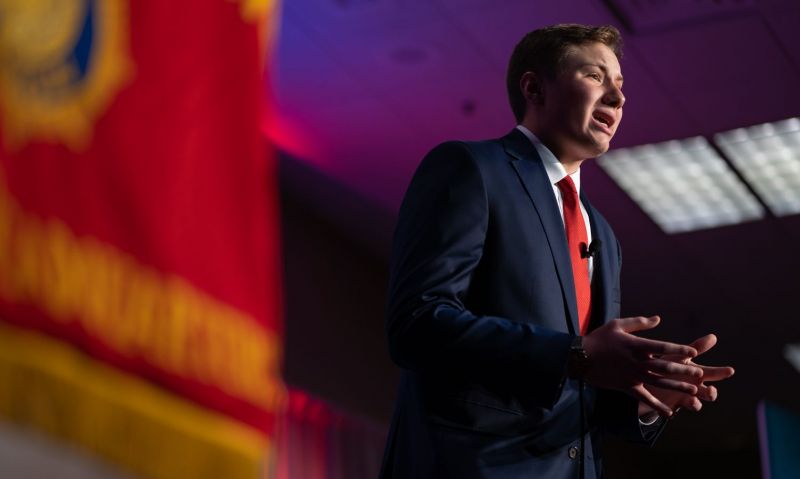 High school junior Patrick Junker of Waukee, Iowa, won an $18,000 scholarship and The American Legion’s 82nd annual National Oratorical Contest, “A U.S. Constitutional Speech Contest,” April 7 in Indianapolis. It was a significant comeback after not advancing past the quarterfinal round during last year’s contest, a loss he said that was “extremely influential.” It gave him confidence and encouragement to write a prepared oration that he was passionate about, that he believed in – “The Spread of Constitutional Apathy and How to Quarantine It.”

Junker’s inspiration for his speech came from U.S. government class where he saw how his peers didn’t care about the Constitution and its purpose. “We must not only teach students the Constitution, but we must also teach them the importance it has on our everyday life. We must teach them this importance in order to safeguard our future,” said Junker, who was sponsored by American Legion Post 403, where his father, Vincent, is the commander. “We must promote the Constitution in our classrooms. We must honor those who fought for our freedom by fighting for every American's freedom. I guess that apathy can be stopped with medicine. We are that medicine, and we should never let apathy dilute our potency.”

Junker emerged in the National Oratorical Contest from a competitive field of 52 other high school orators who won their respective American Legion department Oratorical Contest. Throughout the weekend's competition, the contestants presented a rehearsed eight- to 10-minute oration on an aspect of the Constitution in front of judges, as well as a three- to five-minute speech on an assigned topic discourse — a phase of the Constitution selected from its Articles and Sections. Junker was one of three finalists to advance through semifinals on Saturday to stand on a stage at the Wyndham Hotel for the finals competition. Once results were finalized, National Commander Brett Reistad and Americanism Commission Chairman Richard Anderson presented the awards to the three orators.

Making it back to the National Oratorical Contest was largely in part of support from members of American Legion Post 403, Junker said. “They all supported me, they all pushed me, they all gave me the opportunity to practice and I don’t think I would be at this level without them.”

If he didn’t make it past quarterfinals again this year, Junker said he wasn’t coming back to try to advance a third time. Instead of writing another Constitutional speech, he planned to mentor future orators so they too could have success in public speaking like he did with The American Legion’s Oratorical Contest – his stepping stone into public speaking. As a mentor, Junker is going to share what makes a good Oratorical Contest prepared oration – “it sounds like something they would say, that they truly believe in, that they are truly passionate about. They are not just presenting, they are trying to inspire. Do your own speech.”

Junker is the second youngest of seven children, yet the only one to have competed in The American Legion’s Oratorical Contest. However, as he prepares to attend American Legion Iowa Boys State this summer, it’s a program that an older brother participated in and sister with Auxiliary Girls State.

“I really want to thank The American Legion for the opportunity to do this. This has built so many skills for me such as confidence, charisma, how to research effectively, how to write speeches effectively, and present to an audience,” Junker said. “The American Legion, because of this contest, has taught me so many different life skills that i will use in the future.”

Junker will join other American Legion youth program champions at the 101st National Convention in Indianapolis in late August for a special recognition.