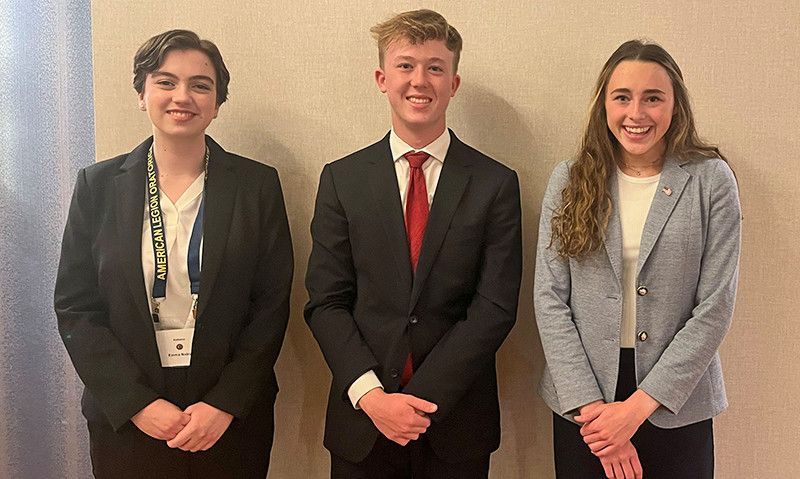 The American Legion’s 83rd National Oratorical Contest got underway Saturday in Indianapolis where 50 high school orators from across the country spoke on the U.S. Constitution. After two rounds of competition, the top three orators have earned a spot in Sunday morning’s National Oratorical Finals.

Emma Noble of Birmingham, Ala.; Jackson Boone of Calvert City, Ky.; and Ashley Tuell of Johnson City, Tenn., will compete for a chance to win first place and a $25,000 scholarship. Second and third place will earn $22,500 and $20,000, respectively.

The American Legion’s speech contest was the first of its kind for Tuell to ever compete. The senior at Providence Academy learned about the contest from her economics teacher and took a chance at it. “I’m just in awe. I’m very grateful to be in the top three,” said Tuell, who attended American Legion Auxiliary Girls State last summer. Her passion for history made research for her prepared oration easy; the hard part was “learning how to present well is something I had to work on.”

The title of Tuell’s prepared oration is “We the People.” She opens with Benjamin Franklin leaving a Philadelphia courtroom on Sept. 17,1778, where delegates to the Constitutional Convention prepare to go back to their home state “and encourage the vote to ratify their newly created American Constitution,” she wrote. Outside the courtroom a woman asks Franklin, “’Well, Doctor, what we got- a Republic or a Monarch?’ Ben Franklin paused for a moment, then responded with a knowing smile, ‘A Republic ma'am if you can keep it!’”

“The whole point is that it is up to all of us as we the people to hold our values as Americans,” Tuell said. “That’s what I draw back to in the speech is that it’s up to us to keep our republic and we have to strive to do that as Americans by fulfilling our duties and our obligations.”

This is the third time Boone, a senior at Marshall County High School, has participated in The American Legion oratorical competition. As a freshman in high school he made it to the district level in Kentucky, and last year he won the department-level contest but the national program was cancelled because of COVID-19. After winning Kentucky’s department-level contest again, he feels “incredibly blessed and I’m humbled by the opportunity” to be in Indianapolis for the national contest. “I’m shocked to have made it this far because everyone is just amazing. Listening to some of their speeches, I’m amazed.”

Over the years he has tweaked his prepared oration but kept it focused on the same issue because “it’s near and dear to my heart” – “localism and communities and how the importance of them in our constitutional system.”

The title of Boone’s prepared oration is “A Return to Righteous Ideals” where he states, “America's strength has always been in her people, who reside not at 1600 Pennsylvania Avenue but on Main Street USA. They are at their best not when burdened by the excessive red tape and regulations but instead exercising their individual freedom and personal liberty. These were the values upon which our country was founded and these are the values that must be restored.”

Boone said he’s feeling more relaxed after making it through the quarterfinal and semifinal rounds and is looking forward to competing tomorrow. “I had to miss prom (to compete) so I was hoping I could justify that a little bit. As far as I’m concerned, it’s justified.”

In 2021, Noble placed third in Alabama’s department-level oratorical contest. Her sponsoring American Legion Post 555 encouraged her to come back and compete again. “I did because I just really enjoyed the experience,” she said.

Noble, a junior at Alabama School of Fine Arts, participated in theater as a young child so entertaining listeners about the U.S. Constitution is how she came up with her prepared oration title, "The Power of the Executive Order: Because I Said So!" “A phrase most of us have heard from our parents as a definitive end to an argument,” she said. The first four words of her oration are “Because I said so!”, which she “yells and immediately I’ve got everybody looking. That is the metaphor I stick with the whole time.”

As her oration states, “You trust your parents' reasoning behind ‘because I said so’ because they are making fast decisions that probably promote your safety and well-being. You need to be able to trust your president to do the same. Executive orders are an extremely valuable tool because they are much faster than passing a law through the legislative branch; however, they are not trivial to undo so you must have confidence in the person making them. It is a citizen's responsibility to vote. Not only that, but to vote for someone you trust with the power of executive orders. Because I said so.”

To earn a spot in the National Oratorical Contest, the 50 contestants won their respective American Legion post, district and department contest. Saturday’s contest began with the quarterfinals where contestants were divided into nine groups to present their prepared 8 to 10-minute oration on the U.S. Constitution, as well as a 3 to 5-minute oration on an assigned topic discourse – a phase of the Constitution selected from Articles and Sections – in front of judges and family members. The top 18, instead of nine like years past in an effort to provide more opportunity for the contestants, advanced to the semifinal round to again present their prepared speeches. Noble, Boone and Tuell edged out the competition in the semifinal round to become the top three finalists.

Since 1938, The American Legion’s Oratorical Contest has awarded more than $3 million in scholarships to high school orators. For more information, visit legion.org/oratorical.