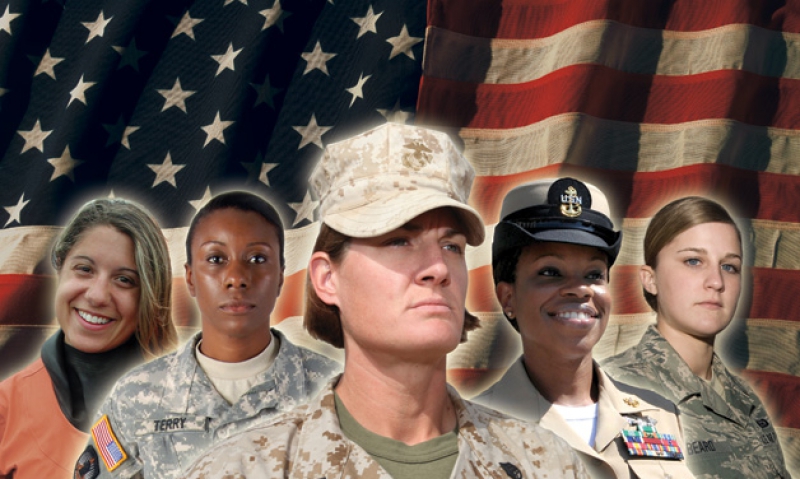 The concerns of female veterans have always been a high priority for The American Legion. And now that women are forced into combat roles in areas that lack clearly defined battle lines, they are returning home with the same injuries and wounds as male veterans - yet they have unique concerns about how the existing VA health-care system is adapting to their needs.

These women are bringing home challenges requiring gender-specific expertise and care. According to a 2011 analysis by researchers Paula Schnurr and Carole Lunney, post-traumatic stress disorder (PTSD) is especially prevalent among women. For example, 10.2 percent of women who used VA facilities in 2009 were diagnosed with PTSD, compared with only 7.8 percent of men.

Overall, of the 1.8 million female veterans in America, about 337,000 are enrolled in the VA health-care system. The proportion of female VA enrollees, according to the Department of Health and Human Services, is expected to increase this decade until one in every 12 will be female.

Currently, 44 percent of Iraq and Afghanistan female veterans have enrolled in the VA system. As this segment of the veterans population continues to expand, it has become increasingly clear that the concerns of women require further analysis to ensure their needs are met in the same manner their male counterparts have already come to expect.

In January 2011, The American Legion launched a landmark survey to gauge the health-care concerns of women veterans to determine whether the VA was meeting their needs. The study surveyed 3,012 female veterans to better understand their health-care needs. The survey consisted of 67 questions, designed to measure the following 10 attributes of service quality: (1) tangibles, (2) reliability, (3) responsiveness, (4) compe-tence, (5) courtesy, (6) communication, (7) credibility, (8) security, (9) access, and (10) understanding/knowing the customer. The survey found widespread dissatisfaction in health-care sevices among women veterans.

Only 42 percent of respondents were satisfied with the screening process for military sexual trauma (MST). This is particularly troubling when some sources report that one in three women on active duty is likely to have experienced some level of MST. One study reported that distress associated with sexual trauma among female veterans was four times more likely than duty-related stress associated with PTSD. This startling concern merits immediate attention. The American Legion recommends that VA conduct a comprehensive study of MST - in conjunction with the Department of Defense, if possible - to develop a better plan to counteract this widespread problem.

Almost 25 percent of the respondents rated the convenience of the location of VA facilities for women-specific issues as poor, indicating that gender-specific care is difficult to obtain for many female veterans.

Almost 57 percent of respondents were satisfied with the reliability of health care provided by VA when compared to private health-care providers.

More than three in 10 were dissatisfied when they compared the responsiveness of VA to that of private health-care providers. This is a theme that occurs throughout the survey results.

Over 25 percent of respondents expressed a level of dissatisfaction for security, which suggests there is room for improvement, especially when it comes to a patient's personal information.

Nearly one-third indicated they were dissatisfied with their most recent experiences with women veterans program managers, suggesting there is room for significant improvement in the capabilities of VA to provide gender-specific services.

VA needs to develop a comprehensive picture of women's health that extends beyond reproductive issues. Provider education needs improvement. Furthermore, as female veterans are often the sole caregivers in families, services and benefits designed to promote independent living for combat-injured veterans must be evaluated, and needs such as child care must be factored into the equation. Many female veterans cannot make appointments, due to the lack of child-care options available within VA medical centers. Since conducting the survey, the Legion has continued to advocate for improvements in the delivery of timely and high-quality health care for female veterans. During the System Worth Saving (SWS) site visits, task force members have asked medical staff at VA facilities about their women veterans programs and shared areas of concern.

The American Legion will continue to make recommendations to the administration, Congress and VA on how women veterans programs can be more effectively supported. One primary role of the Legion's female veterans outreach coordinator is to identify best practices and challenges, and work with Legion departments to establish coordinators at the state level.

While conducting the survey, the Legion was overwhelmed with responses from women who were grateful that someone had reached out to determine their needs. After years of being met with silence and indifference, they feel that someone is finally listening. The Legion urges VA, Congress and other interested parties to heed those words and refocus attention on the VA health-care needs of women.

The Women Veterans Outreach Program is moving forward on a number of fronts. Initial efforts have focused on laying the groundwork for a viable and effective program. The Legion's platform is to educate, collaborate, and provide oversight; to educate veterans and the communities that support them; to collaborate with local, state and federal agencies that can provide needed services; and to provide continued oversight of VA's delivery of benefits and services. Legion advocacy efforts will ensure that the needs of female veterans are being met and, more importantly, that female veterans are informed about issues that can profoundly affect their lives.

Initial program implementation will include the placement of women veteran outreach coordinators at the state level. Many states already have such coordinators and vibrant programs, while others continue to develop their programs. Coordinators will be trained and educated in their responsibilities and given the necessary assistance to get their programs up and running.
The American Legion's continued focus on female veterans will ensure that our outreach program will be a model for others to follow.

Save
Tags:Our Pillars Your Platform