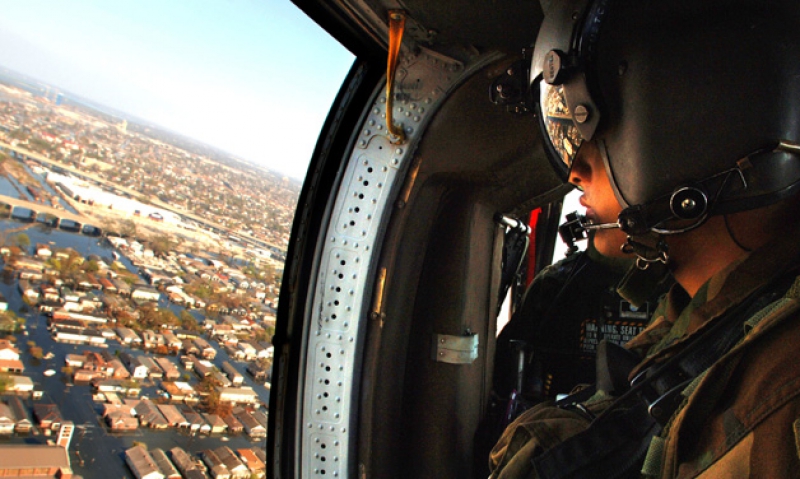 To those who have sworn with their lives to protect America against enemies near and far, national security is a deeply held value. The terrorist attacks of Sept. 11, 2001 exposed this nation's vulnerabilities and magnified the importance of this value - not only for military veterans, but for all Americans. Since then, The American Legion has passed national resolutions supporting and reconfirming its support for the Global War on Terrorism and for all who have critical responsibilities in fighting it: the White House; Congress; departments of Defense, State and Homeland Security; and, foremost, the troops and civilians protecting U.S. interests at home and abroad from terrorist acts.

Focusing awareness and surveillance on rogue nations, terrorist groups and global threats to U.S. security around the world.

Supporting the Department of Homeland Security (DHS) and urging its steadfast protection of U.S. borders, ports and other entry points.

Providing an efficient and compassionate healing and transition program for wounded, ill or injured warriors.

Also within the Legion's national security pillar is the Foreign Relations Commission that works closely with the Department of State to seek peaceful solutions to conflicts around the world, and to advance the goals of U.S. foreign policy.

The American Legion's national security positions include these key areas:

Strong National Defense
A strong, adequately funded U.S. military is essential for global peace and prosperity in the 21st century. As the world's sole superpower, the United States must be able to deter aggression while maintaining the ability to fight and win wars when necessary. Our adversaries should have no doubt about America's resolve and means to respond with overwhelming force when national interests are threatened. Today, however, with the United States facing mounting debt obligations and unprecedented deficit projections, the defense budget has become an easy target. Nevertheless, The American Legion opposes any further decreases in U.S. defense spending.

"Ever-increasing entitlement spending is putting pressure on key spending priorities such as national defense, a core constitutional function of government. Defense spending has declined significantly over time, even when the wars in Iraq and Afghanistan are included, as spending on the three major entitlements — Social Security, Medicare and Medicaid — has more than tripled." While the Iraq War is over and the Afghanistan War is winding down, the United States and its allies still face a dangerous and unstable world.

As part of the Budget Control Act of 2011, caps were placed on the defense budget and other forms of discretionary spending. In implementing these budgetary caps, the Obama administration proposed in its FY 2013 budget to cut Pentagon spending by roughly $487 billion over the next decade. In addition, because Congress failed to meet the act's deadline to reduce the long-term deficit by $1.2 trillion, the Pentagon now faces the worst-case scenario: current law now requires additional across-the-board, automatic cuts (sequestration) to the Pentagon budget, totaling more than $500 billion over 10 years.

A wide range of America's civilian and military leaders have voiced grave concerns about the danger of further defense cuts, which would dangerously weaken America's standing in the world and undermine our leadership among allies. Furthermore, after more than a decade of warfare in Iraq and Afghanistan, U.S. military hardware is in need of replacement and modernization, and our troops deserve the hard-earned benefits of service. We risk leaving our military a "hollow" force like that of the post-Vietnam War era, which took years to rebuild.

The Legion also advocates greater military force end-strength to reduce stress on the reserves and National Guard, decrease the number of extended deployments and better position the United States in the event of a sudden national security emergency. 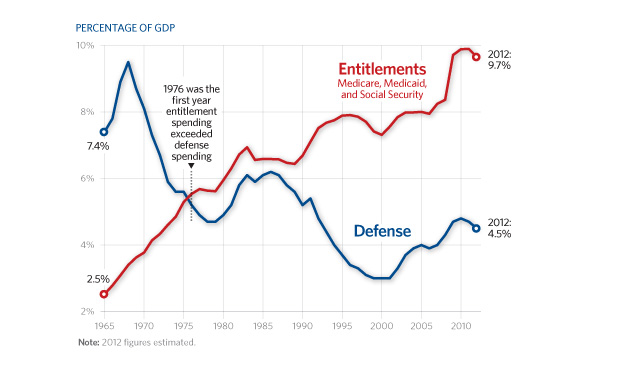 Military health-care programs must be fully funded without additional enrollment fees or co-payment increases for beneficiaries. TRICARE coverage should also be made permanent for members of the reserves.

Servicemembers who sustain injuries or illnesses while on active duty must be given fair and timely discharge processing, and their transition to civilian life and/or VA health care made seamless. The American Legion strongly supports a continuum of care for disabled veterans after they return to civilian life. The Legion encourages swift and efficient action to integrate various federal departments, agencies and programs to improve the transition process and sustain the continuum of care.

Homeland Security
Since 9/11 and the devastating hurricanes of 2005, America has become acutely aware of the danger posed by terrorist attacks and catastrophic disasters on U.S. soil. The American Legion works closely with government at all levels to improve disaster readiness in local communities and, at the national level, to ensure that a well-funded and efficient DHS is prepared for any catastrophic event.

DHS was created in the aftermath of the 9/11 attacks. Since the inception of DHS, the Legion has supported the department's intent, purpose and arrangement: to harmonize myriad agencies, offices, businesses, community groups and others with readiness responsibilities and quick-response capabilities. The Legion is an active contributor to that effort on the local and national levels, and concurs with the DHS mission to coordinate domestic security - including effective customs operations and drug interdiction.

Immigration Enforcement
The Pew Research Center has estimated that 11.2 million illegal immigrants lived in the United States in 2010. DHS's Office of Audits claims that, each year, more than one million aliens attempt to illegally enter this country without proper documentation or enter legally and violate their visas.

A broad exchange of intelligence and related action is needed among the Department of Justice and regulatory agencies that govern immigration policy and social services. Federal agencies must use modern systems and technology to aggressively track foreign nationals as a deterrent to terrorist activities. Failure to properly monitor illegal aliens threatens the security and future of America.

The American Legion urges Congress to adopt an immigration reform policy which emphasizes border security against those individuals attempting to enter this country illegally, and internal tracking of all resident aliens and illegal immigrants. The Legion opposes legislation granting amnesty and legal residency to illegal immigrants currently in the United States.

The Legion also opposes any change to Title V of the "Immigration and Nationality Act" (8 U.S.C. 1531-1537) that would require revealing the source(s) of secret evidence used in administrative deportation hearings by the U.S. Citizenship and Immigration Services.

Foreign Relations
As the leader of the free world, the United States has great and multiple responsibilities. The American Legion encourages increased federal funding for foreign relations and international affairs, and for the Department of State's continuing efforts to seek peaceful and diplomatic solutions to world conflicts. More funding should also be given to the Department of State's Civilian Response Corps initiative for deployment before, during or after armed conflict.

The Legion strongly supports the State Department and the functions it performs for American citizens overseas; it is the country's first line of defense in combating the myriad security threats that face America from outside its borders. Therefore, the Legion vigorously supports increased funding for the department, so it can maintain a credible initial deterrent to international threats to the United States and effectively promote American interests abroad.

The Legion also urges the president, Congress and the Department of State to significantly increase the number of foreign service officers in its ranks and to implement a veterans preference policy to enhance America's diplomatic missions by recruiting more qualified and experienced veterans.

In addition, the Legion recommends enhanced funding for the U.S. Agency for International Development (USAID) within the Department of State, and recommends such funding be targeted for nations that may become sources of international terrorism.

Full Accounting of American POW/MIAs
A sacred value of The American Legion is the full accounting and repatriation of fallen U.S. servicemembers. The Legion supports Joint POW/MIA Accounting Command activities to locate and repatriate all recoverable remains of U.S. military personnel who have died or are missing in foreign battle zones.

In the Event of a Natural Disaster
To The American Legion, the provision of security for the nation includes protection of its citizens from the devastating financial effects of natural disasters. In the 1920s, not long after the organization's founding, the Legion entered into an agreement with The American Red Cross to assist in disaster relief and fundraising. The collaboration continued for about a half century until, in the wake of Hurricane Hugo in 1989, the Legion created an autonomous disaster-relief entity, the National Emergency Fund (NEF).

The NEF assists stricken American Legion family members with immediate monetary assistance. Since its inception, the NEF has provided over $7.5 million in direct financial aid to members and posts. In 2011, for instance, 314 NEF disaster relief grants totaling $345,300 were awarded to veterans and their families. These NEF grants included those provided after the spring tornadoes and floods that hit the South and Midwest, leaving behind a trail of devastation. Among the victims assisted by NEF so far in 2012 are those displaced by Indiana tornadoes in early spring.

The National Emergency Fund is not the only source of American Legion disaster relief. At the grassroots level, Legion posts such as Post 210 in Montgomery, Ala., are always ready to assist. In 2011, Post 210 members came to the aid of tornado victims in Tuscaloosa, 100 miles away. Legionnaires and their neighbors spent two nights sorting and boxing donated goods such as food and clothing before heading to the storm-ravaged college town.

Heroes to Hometowns
An example of a prominent American Legion national security program is Heroes to Hometowns. Nationally and locally, the Legion works closely with the Department of Defense (DoD) to connect returning, service-disabled veterans with local resources to help them and their families.

With 14,000 posts worldwide, the Legion assists veterans and families of wounded military personnel as they transition back to civilian and community life, using the VA health-care system, TRICARE or TRICARE for Life.