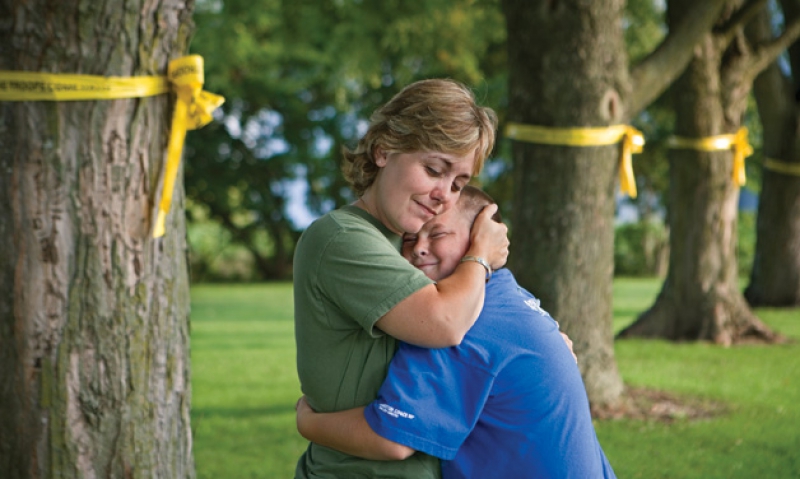 Today's young people face an array of societal pressures. The dissolution of the traditional American family, illegal drug use, TV shows and movies filled with obscenities and indecencies. There is an alarming increase in bullying, aided by the spread of smart phones and social media.

Gone are the care-free days when children spent their summers playing baseball on vacant lots, lounging in tree houses and riding bikes around town.

The American Legion's National Commission on Children & Youth is guided by three main objectives: to strengthen the family unit, work with quality organizations that provide services for children and provide communities with well-rounded programs that meet the needs of young people.

The American Legion Child Welfare Foundation provides more than $500,000 in grants each year to nonprofit organizations that work to improve the lives of young people. Such grants have benefited organ-donor campaigns, supported efforts to help military children cope with deployments or loss of a parent, and funded projects that increased public awareness of Huntington's disease, autism, Reyes syndrome, meningitis, spina bifida, diabetes, cancer and other debilitating conditions.

Since its founding in 1919, The American Legion has been a staunch supporter of children and youth. The National Commission on Children & Youth continues that commitment today, as it seeks to improve the well-being of all children. The key to the future of a free and prosperous country, expressed by every generation of veterans, is held by the children and youth of today. The Legion strongly supports traditional family values, assistance for at-risk children and activities that promote their healthy and wholesome development. While there is no way of knowing what issues will face our youth tomorrow, our survival may well depend on the quality of care, education and training that we, as parents and citizens, provide for the young people of today.

The American Legion's Children & Youth pillar's most critical issues are:

Immunization for Needy Children. The Legion urges federal funding for state and local health agencies to insure that medically indigent children are afforded the opportunity to receive needed vaccines and treatment.

Family Integrity. The Legion promotes the family as the cornerstone of society and supports National Family Week each November. The Legion further recognizes that the natural family is a fundamental unit, inscribed in human nature and centered on the voluntary union of a man and woman in a lifelong covenant of marriage.

Media Violence. The American Legion supports appropriate state and federal legislation to restrict the excessive use of violence, vulgarity and immoral expressions in movies, television programs, news broadcasts, video games and the Internet.

Child Sexual Exploitation. The Legion supports appropriate laws aimed at the prevention, investigation and prosecution of child sexual exploitation, and seeks to empower the public to take urgent and direct action to enforce a zero-tolerance policy.

Temporary Financial Assistance
Facing a third deployment overseas, one servicemember had his activation orders delayed twice. His civilian job replacement had already been hired and he was unable to pay his rent. He turned to his local American Legion post for help, and the answer to this family's crisis came in the form of the Legion's Temporary Financial Assistance (TFA) program. Through TFA, a local Legion post can call upon the national organization for cash assistance to help meet the basic needs of minor children of eligible veterans and servicemembers, when all other sources of assistance have been exhausted. Working through national headquarters, the Legion post was able to secure cash-grant assistance for he and his family, which paid the rent and bridged the pay gap - thereby ensuring that his two children and wife would remain in their home.

Money for TFA comes through the American Legion Endowment Fund. In 2011, 1,358 children were helped by TFA, amounting to more than $635,786 in disbursements.

When National Guardsmen and reservists are mobilized, their families often find themselves unable to meet normal monthly expenses, and in need of assistance for a variety of everyday chores such as grocery shopping, child care, mowing the grass, fixing the car and other routine household jobs.

To address these issues, the Legion has a nationwide toll-free telephone number (800) 504-4098, for servicemembers and their families to call for assistance. Requests also can be made online at www.legion.org/fsn. All inquiries are referred to The American Legion department in which the call originated. Departments relay the collected information to a local American Legion post. The post then contacts the servicemember or family to see how assistance can be provided. Since the creation of the Family Support Network during the Gulf War, thousands of posts have responded to meet military families' needs.

Posts are reminded that families in financial need with minor children are encouraged to call on the Temporary Financial Assistance program at national headquarters to assist. Otherwise, it is up to local posts to provide or develop sufficient resources to meet the need.

Thousands of requests through the Family Support Network are received every year at all levels of The American Legion, with national headquarters alone receiving 2,153 requests in 2011. Most cases are handled locally, without notification or involvement from the national organization. Creating an ongoing and active relationship with local military units allows posts to respond immediately when needs arise.

The American Legion Child Welfare Foundation
The foremost philanthropic priority of The American Legion Child Welfare Foundation is to provide other nonprofit organizations with grants to educate the public about the needs of children across the nation. For 2012, the foundation awarded $506,683 in grants to 18 nonprofit organizations to support programs that help children and youth: