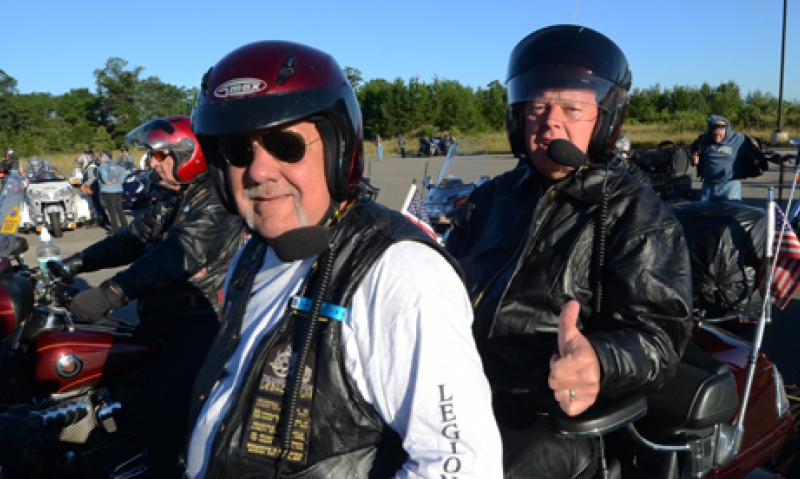 American Legion Multimedia Editor Steve B. Brooks will be chronicling the Legacy Run for the second straight year.

5:45 a.m. - Awakened earlier that I'd planned, I begin foraging for Old Dutch potato chips. A Cubs Foods is open; the results are amazing. A whole section of Old Dutch - different flavors, different styles. I buy three bags. Should last through the weekend.

7:36 a.m. - Bruce Shepherd of Post 67 in Sheridan, Ind., is on the final stretch of his first Run, traveling with his wife, Linda. "Today looks like it's going to be the best weather," he says. "It's only fitting that we have beautiful weather when we're riding into Minneapolis, the site of our national convention." Shepherd says there are two sides to saying goodbye to the friends he made on the Run. "You have to say goodbye, but when we get together again, we'll be greeting old friends, instead of making new ones."

7:44 a.m. - National Commander Jimmie L. Foster is riding a stretch of the run on the back of "trike" of Earl Ruttkofsky, past national commander of the Sons of The American Legion. Foster is decked out in a leather coat and chaps. "My motto this year has been, ‘Don't ask people to do what you wouldn't,'" Foster says. "This way I can say I really participated in it. I've been riding in the van. Now people can see me out on the bike."

8 a.m. - Just over 200 motorcycles head out of Brainerd toward Rice, Minn., for the last gas stop of the Run.

9:47 a.m. - We drive by an Amish furniture store while Public Enemy is playing on the radio. Just felt a need to report that.

10:59 a.m. - Foster arrives at Minneapolis/Richfield Post 435. His trek on the bike was enjoyable. "It was good, man. It was a good time," he says. "The only bad part was I had to lean to the left or the right of Earl to see. He was a big target, but he did a good job of blocking the wind for me."

11:39 a.m. - SAL member Shawn Davis, director of Post 435's Legion Riders, is coordinating the reception for the riders. "This is a very big, impressive event," he says. "It helps the post with local recognition. We've got a lot of pride from being able to do this. It's an honor. It's nice to be a part of this and be able to thank these folks for riding so far for the kids."

11:52 a.m. - The Riders arrive at Post 435. A meal of pulled pork, sloppy Joes and hotdogs awaits, as do cheering Legion family members from Minnesota's Districts 5 and 10. Department of Minnesota Commander Chuck Kruger also is in attendance, as is State Rep. Linda Slocum.

12:01 - Steve Ridenour of Post 135 in Tahlequah, Okla., parks his bike and walks toward the post. He started in Indiana on Sunday; it's the fifth Run he's finished. He's tired, but that's OK. "It's really sort of humbling to finish this ride," he says. "We've been fortunate, at least on the last two Runs, to have some family member of a fallen hero talk to us. That really helps energize you and refocus on what's important in life." Ridenour said even though the 2011 Legacy Run has come to an end, the mission of The American Legion Riders is far from over. "At the end of the Run, it's a celebration, knowing we've reached another point toward our goal of raising $20 million (for the Legacy Fund)," Ridenour says. "But we still can't quit. We have to keep going."

1:29 p.m. - The Department of Kansas wins an auction for a banner signed by all the riders. The winning bid: $375. Pretty cool.

1:30 p.m. - The final day brings in another $90,000 including $32,000 from Converse, Texas, Post 593 and $13,500 from Riders Chapter 178 in Murrells Inlet, S.C. Post 593's T.J. Haynes says a member of his post had been killed in the line of duty this year, leaving behind two daughters. "I'm sure his daughters will be able to use this money one day," Haynes says. The total raised so far is $335,666.66, "You continue to give me renewed faith in America, and I love you," Foster tells the riders. But as Ridenour says, the Riders aren't done. Stayed tuned to Tuesday's national convention coverage for the final tally.