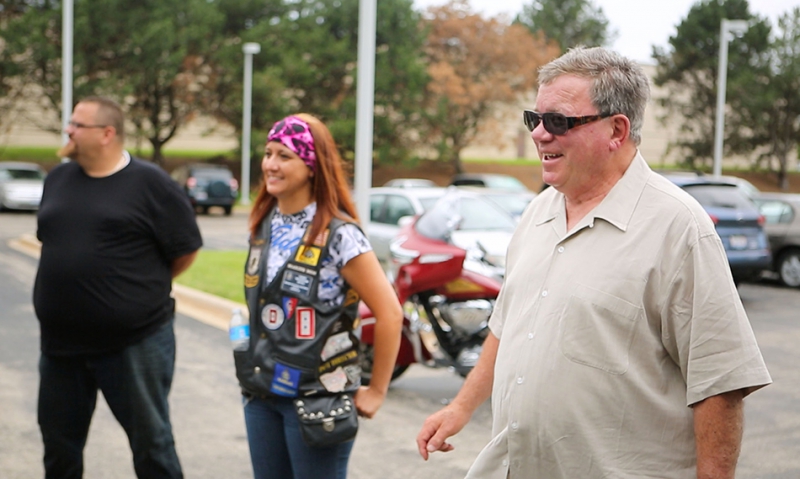 On June 23, entertainment icon William Shatner and The American Legion will team up for a cross-country motorcycle trek that will include stops at Legion posts from St. Louis to Hollywood. Shatner is teaming up with American Legion Riders to help raise awareness of American Legion programs and raise funds for The American Legion Legacy Scholarship, which helps cover college expenses for children of U.S. military men and women who lost their lives while on duty since Sept. 11, 2001.

Shatner will be riding a Rivet, a never-before-seen vehicle created by him and motorcycle company American Wrench. The ride will begin in Chicago and retrace the route Shatner took to Hollywood when he was just 19 years old.

Shatner spoke with The American Legion about the ride, his motorcycle and the reason for supporting the Legacy Fund.

The American Legion: How did you connect with American Wrench on the Rivet?

William Shatner: I was signing autographs in Chicago, and a guy comes up to me – who turns out later to be one of the Sirotek brothers – and said “We’d like to make you a motorcycle.” I said, “Fine.” Who am I to refuse the gift of the motorcycle? And that resulted my meeting both brothers, Kevin and Brian (vice presidents of Illinois Auto Electric Co., American Wrench’s parent company). We began to talk motorcycles, and this … offer out of the clouds became more concrete the further we discussed. And the more we discussed, the more ambitious our plans became. So rather than taking an old motorcycle and giving it a little juice, it became, "Let’s make a new motorcycle. Let’s design something totally new. Let’s do something that belongs in the Museum of Modern Art." And I said, "I’ll drive the darn thing from Chicago to L.A." They said, "Great." And then I said, "Wait a minute, I’ll film it." They said, “Greater.” And then we incorporated The American Legion. So it’s become a fundraiser, an American Legion high sign, a documentary and a ride promoting our partnership between American Wrench and me which we’re calling Rivet Motors. And, in fact, a film company called Rivet Films.

Q: How long have you been riding?

A: A long time. I’ve had motorcycles a good length there. Also, there is a connection between horses and motorcycles. The difference, of course, is the horse has a mind of its own, and you’ve got to sort of cajole that mind. But that feeling of unity with a motorcycle, when you achieve that sense of feeling of unity, that’s very much like the sense a horseman feels when he’s connected with his horse.

A: I thumbed it when I was on my way to college between my high school and college year. I went from Montreal all the way to the West Coast, then down the West Coast, then up to Vancouver and back. So I had done Route 66 many, many years ago when it was in its heyday. It is the most direct route to L.A., and it seemed poetic to try to repeat what I had done as a youngster. We will be doing interviews (with) people who have iconic things along the route.

Q: How did you become aware of The American Legion Riders?

A. Kevin Sirotek made contact with (Legion Riders staff liaison) Bill Sloan. When we realized that we needed logistical help, and when Bill Sloan acquainted us with the scholarship fund, it seemed like a natural pairing. In addition to that, I want some regular characters in our documentary to whom I will speak all the time about how it’s going, what they’re thinking and their impressions and their experiences in the military and on motorcycles. So we’ve got three (to) four people riding with me, in addition to the Riders we hope to meet at the posts along the way. It all sort of fell together. It was a synergy between all of us. It just worked out.

Q. What is it about the Legacy Fund that you feel merits this nationwide campaign?

A. I run a charity in Los Angeles that is devoted to helping children in need. I’ve been doing it for 30 years. By the extension, many of the ills of the children are the ills of the veterans. So we’ve extended some of our help to veterans’ needs. What could be more heart-tugging, heart-breaking and fulfill a need more than a scholarship fund for kids who no longer have a father, or maybe a mother or both? It is a necessity to take that child who is left bereft to one degree or another and try and fulfill that hole that has been left with education, and giving them a chance at life that they might not have without the scholarship fund.

Q: We hear sometimes about a “disconnect” between the civilian population and the military because so few U.S. citizens actually served in the armed forces. Do you think it’s important that people every now and then stop to recognize what the military provides for us and what it makes possible for the rest of the country?

A. I don’t understand the term “disconnect.” (In) my mind, and everyone I’ve come in touch with, feels that extreme debt to every human being that went out to fight a war for us and came back, whether they're whole or partially injured in some area. That debt of gratitude extends to everybody. I don’t know of anybody who doesn’t say “bless our soldiers.” I, and the people around me, are not disconnected from the military.

Q: What are you looking forward to the most about this ride?

A: I’m looking forward to the adventure of being on this extraordinary piece of machinery in the company of some really remarkable people. And I include The American Legion guys and girls that I haven’t met yet. The people here in Chicago are remarkable human beings, and I just know, having talked to Bill Sloan and read the résumés of the people I’m riding with – American Legion people – they will be equally so. So I’m looking to that adventure, of exploring them and exploring the route.