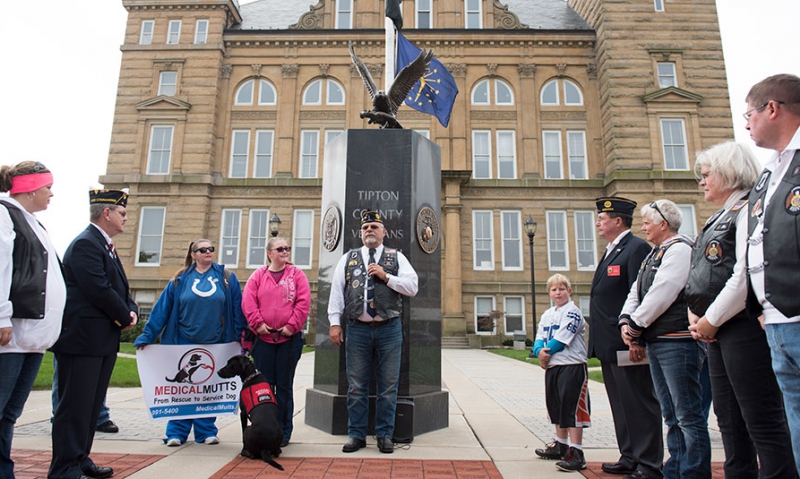 It had come down to Jimmy and Sharon Phillips dividing up four-hour shifts each night to sit bedside while their daughter Melissa slept. The reason: to ensure that Melissa, who suffers from diabetes, didn’t either slip into a coma or suffer seizures if her blood sugar dipped too low or if it spiked.

But thanks to a community effort spearheaded by American Legion Post 341 and its American Legion Riders chapter in Cicero, Ind., the Phillips can sleep well at night knowing their daughter is under the watchful eye of a service dog.

Post 341 and its Legion Riders helped raised more than $6,000 toward the purchase of Azalea, a service dog trained to monitor blood sugar levels. The dog was presented to Melissa Phillips, a student at Tipton High School, in October; a formal presentation took place Oct. 15 in front of the Tipton County Courthouse.

Through their sense of smell, dogs have the ability to detect when a person’s blood sugar level dips too high or too low. Indianapolis-based Medical Mutts provided Azalea with her training.

If Azalea can’t wake Melissa up, she barks to alert her parents. Azalea has been with Melissa for two weeks and already has provided multiple alerts to both Melissa and her parents.

“We don’t have the fear now of getting up and finding her dead because we missed it,” said Jimmy, who served in the U.S. Army from 1980 to 1999 before being medically retired. “We don’t have that fear now.”

Post 341’s members heard about the Phillips’ predicament and set up a raffle to help with the purchase of the dog. Jody Brown, Post 341’s commander and Riders director, said he had been told by Sharon that last Christmas Melissa’s blood sugar jumped above 600 and down to 50 in the same day.

Being able to help the Phillips with their situation has meant a lot to Post 341’s members. “It’s hard to describe how this makes us feel,” Brown said. “It’s very gratifying, and even a little emotional, thinking about what we were able to do. It was just an idea: ‘Let’s see if we can raise some money.’

“Our post isn’t a large post and definitely not a rich post. But we were just convinced we could do it. And all of our Legion Riders, especially, were just all on board. Our post … was on board with it. We just did it.”

The cost of the dog was $12,000, and nearly $6,000 of that came from nearby East Union Christian Church, which had a dinner and silent auction to help with the effort. Senior Pastor Rex Dunning said the church became aware of the Phillips’ situation because of a prayer request. “It just kind of clicked with everyone in the congregation,” he said. “Everybody just got behind it. It was just a mission that we supported and wanted to help with. It was a worthy adventure. And to see the proof, you know you’re a wise steward of your money and that it went to a good cause.”

That cause is making a difference in Melissa’s life. “We’ve already bonded,” she said. “She’s really been a very big help.”

For Susan, the donation brought piece of mind to her and Jimmy. “We were ecstatic,” she said. “We were trying to figure out how we were going to raise $12,000. We don’t know that many people. I have a hard time doing fundraisers for school, let alone trying to raise that kind of money. So this was like a weight lifted from us.”

“All the money (raised) for OCW goes to OCW and goes to the veterans,” said Brown, explaining why the Riders chose to donate to the fund. “It doesn’t go for salaries, overhead or anything like that. That was a big plus for us.”

Koutz said OCW is a critical program for recovering U.S. servicemembers. “Any time a commanding officer wants something for a soldier, they call The American Legion,” he said. “Operation Comfort Warriors … is probably there within a week.”