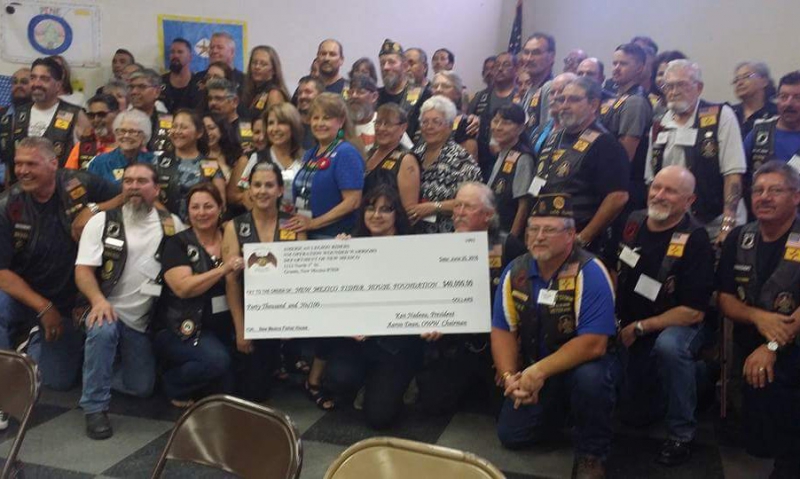 Across the nation, Fisher Houses provide comfort homes where military and veterans’ families can stay at no cost while a loved one is receiving treatment at either a military hospital or Department of Veterans Affairs medical facility.

It’s a mission that for 10 years has been near and dear to the hearts of the Department of New Mexico’s American Legion Riders. Through their Operation Wounded Warrior program, the Riders have raised more than $1 million during that time in both money and supplies to assist with the Fisher House and wounded warrior programs at Brooke Army Medical Center in San Antonio.

And in a little over the past 12 months, those same Legion Riders have donated $50,000 toward construction of and providing supplies for a Fisher House at Raymond G. Murphy Veterans Medical Center in Albuquerque – $40,000 during the department’s 2016 convention and $10,000 more during this year’s convention.

“Because of our work with the Fisher House Foundation (in San Antonio), we got New Mexico on the list,” said Ken Nadeau, the department’s ALR chairman and a member of Los Alamos American Legion Post 90’s executive committee. “It slowly raised up over time to become one of the top three (Fisher Houses) to be built now. We are getting ready to break ground (in September) at the VA property in Albuquerque. This has been a 10-year process of support to the Fisher House Foundation.

“New Mexico itself has 177,000 vets in the state, and they need support. We are one of the poorer states out there. They don’t all have the ability to have a place to stay.”

Money and supplies are collected through various events throughout the state, as well as reaching out to Wal-Mart at the state level. Nadeau said that one day is established each year for ALR chapters to collect health and comfort items, and cash donations, within their community. Chapters also conduct raffles, auctions and benefit rides to raise money. The Riders deliver the items they collect in person.

Nadeau said presenting those checks toward a New Mexico Fisher House felt special. “It gives you goosebumps,” he said. “It was a very prideful moment for me to be able to hand write a check in that amount for that purpose. I even took a picture of that check, because I was so proud to be able to do that kind of work on behalf of all the people who worked hard to raise that money.

“Knowing the good that comes out of it and the people who will be impacted, it means a lot. It really does.”