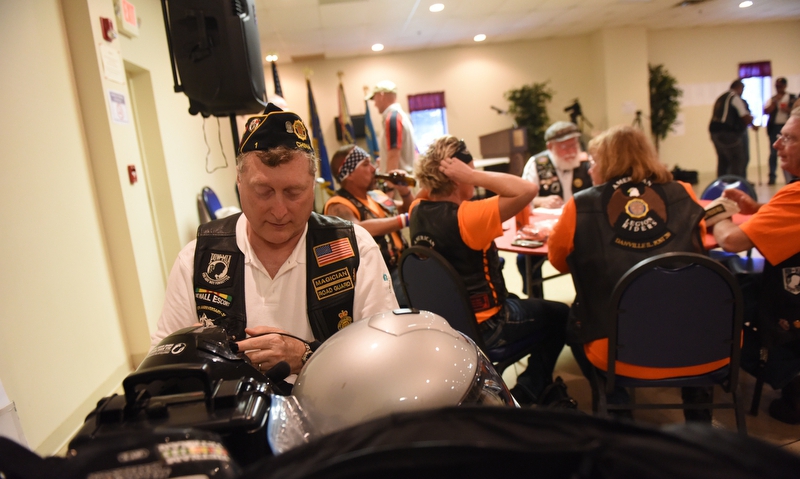 Verlin Abbott, a member of China Post 1, had taken part in all 11 previous Legacy Runs and had helped plan this year's ride. He was killed while providing a funeral escort on Aug. 5. (Photo by Lucas Carter)

More than 400 participants will depart Dodge City, Kan., this weekend to kick off the 12th annual American Legion Legacy Run. They will do so with heavy hearts.

On Aug. 5, American Legion Rider Verlin Abbott was killed in a motorcycle accident while providing a funeral escort in Indianapolis. Abbott, 63, has taken part in every Legacy Run, serving as chief road guard and, more recently, serving as ride co-planner with Chief Road Captain Bob Sussan.

“(Abbott) was not actually scheduled to do (the funeral escort) on the day he was killed,” said Sussan, who met Abbott almost a decade ago and formed a strong friendship with him. “He was helping a friend. He was just always out to help people. It’s a great loss to the Legion and to the Legacy Run.”

Sussan said losing Abbott, a retired U.S. Army lieutenant colonel and member of China Post 1, has been devastating on a personal level. “I feel like I’ve lost a part of me, to be honest,” he said. “He was a dear friend and probably my closest friend. We probably talked 200-300 times a day. I’ll bet you I have at least 5,000 or 8,000 emails that we went back and forth on.”

Sussan said planning this year’s Legacy Run required a 6,000-mile round-trip effort. The pair made four of those leading up to this year’s ride.

“I would go to Indy and pick up Verlin, and we would go to Fort Dodge and do our ride,” Sussan said. “By the time we were done … we spent virtually three months together this year. We got along very well, and he turned out to be a dear, dear friend.”

Marilyn Sussan, Bob’s wife, said Verlin was the perfect planning partner for her husband. “Bob and Verlin were literally attached at the hip,” she said. “Verlin was the highly organized, very detailed one. Bob was the creation. They complemented each other so well in doing all of this work.”

Abbott became a fixture on the ride, handling intersections when there wasn’t local law enforcement available to block traffic. “Everybody knew him on the Legacy Run,” Sussan said. “Everybody appreciated him. He had a great riding skill. He was very, very good on his bike.

“We’re going to dedicate this ride to Verlin. Everybody on the ride is going to have a black ribbon, and we’re going to make a rocker for everybody that’s on this ride for Verlin.”

Verlin’s wife of 21 years, Margaret, formed a close friendship with both Bob and Marilyn. There’s no doubt in her mind that her husband would want the Legacy Run to go on this year.

Marilyn will be in Indiana this week to be with Margaret and attend the funeral. Bob weighed doing the same.

“I was torn about whether I should go on the ride or be with him, but his wife wants me to do what he would want me to do: go on the ride and have a great ride,” Bob said. “I’m going to do that. And he’s going to be riding with us. I really feel he’ll be the angel on our shoulders this year.”

Margaret is asking that in lieu of flowers, memorial contributions in her husband’s name be made to the Legacy Run’s primary beneficiary: The American Legion Legacy Scholarship Fund. Online condolences can be made here.

More than 432 participants have registered for this year’s ride, which will leave Dodge City, Kan., on Aug. 12, travel nearly 1,400 miles across Colorado and Utah before arriving at the 99th National Convention in Reno, Nev., on Aug. 17.

Pre-Legacy Run events will take place at the Kansas Soldiers’ Home, which is about five miles east of Dodge City. The home will host a hog roast for riders on the evening of Aug. 11 and a morning breakfast to kick off the ride, which departs at 8 a.m.

Last year’s Legacy Run helped raise more than $1 million for the Legacy Scholarship Fund for the third straight year. In 11 years, the ride has helped raise more than $7 million for college money for the children of U.S. military personnel killed on active duty on or after Sept. 11, 2001, as well as children of post-9/11 veterans with a combined VA disability rating of 50 percent or higher.