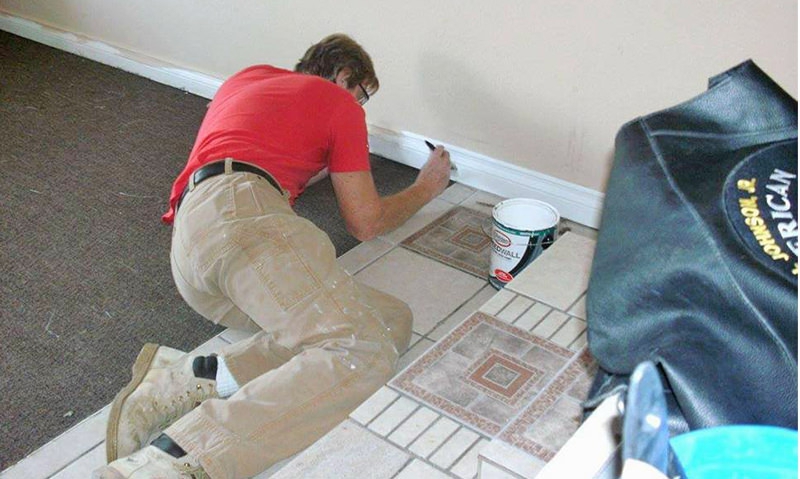 Before he became director of The American Legion Riders chapter at Arthur Leonard Johnson Jr. Post 172 in Warner Robbins, Ga., Rodney Blitch already had a mission of helping a homeless veterans facility in Macon, Ga., become renovated and fully functional. But for the past few years it’s become a mission that Blitch’s fellow ALR 172 members have taken on as well.

Every three months, Riders from Chapter 172 head en masse to the former Villager Lodge motel in Macon, which now is the site of Home Port, a veterans transition home. The Riders, along with other volunteers, work to renovate the facility toward the goal of opening all of the planned 100 rooms this summer.

“Veterans need somewhere to go,” said Blitch, who also serves as Georgia’s 6th District Riders director. “Here in the middle of Georgia area there’s such a large number of homeless veterans. Some of them … want help, but they don’t want to be tied down to a place. But some of them do. This is a great way to transition the ones that want to.”

The building had been vacant for more than a decade before George Brown, John Davis and Venkat Sanjeev decided to create Home Port. That’s meant a major overhaul that has included gutting several rooms and starting from scratch, then putting in new carpet, new air conditioners, new furniture and new bathroom fixtures.

Chapter 172 members come up every four months to organize work days with other volunteers. Between 50-75 people show up to volunteer, including some from other Legion posts in the area. And the Legion Riders provide lunch. Blitch and other members of Chapter 172 also come up on their own to help work at the facility, while both Home Depot and Granger have provided financial assistance to the project.

“We had one company there in Macon – they wish to remain anonymous – they donated to us 1,000 five-gallon buckets of paint to be used for any veteran (at Home Port) who needs it,” Blitch said. “We have any color of paint anybody wants.”

In addition to 100 private rooms, the facility also will have counseling rooms and offices, a chapel, a recreation room and a ballroom that will be rented out to raise funds. A pending grant has raised hopes to have all 100 rooms operational by June; so far, 32 have been renovated and already have veterans residing in them.

The facility is open to male and female veterans and their families. Residents are charged $500 per month for a single unit and $700 for a double. Residents of the facility will have access to counseling services, get vocational training and receive assistance with veterans benefits.

“It just became a good idea,” Blitch said of helping to get the facility going. “It got bigger and bigger. When I first started, there were four veterans in the place. It’s just been a good way to help veterans.”

Benny Brantley, who serves as Chapter 172’s event coordinator and has been working with Blitch at the facility “from the beginning,” hopes the word will get out to homeless veterans about the opportunities at Home Port.

“There are way too many veterans that do not have a place to go," Brantley told The Telegraph in Macon. "We just want people to know more about this place and that it's here."