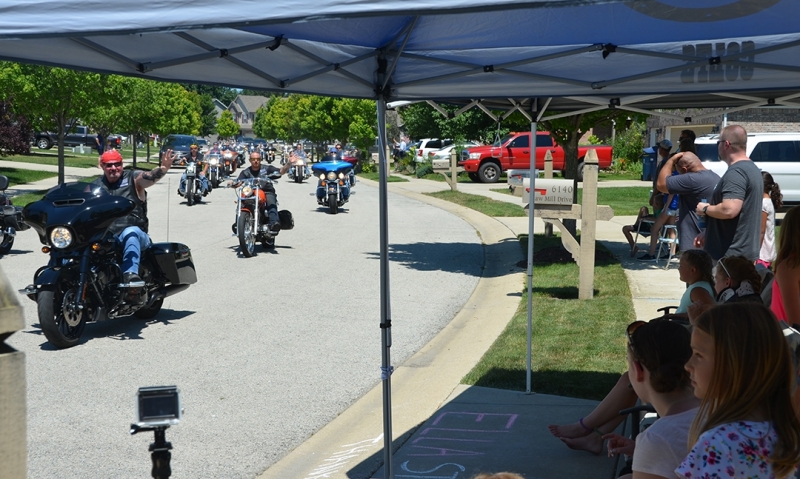 In late May, 13-year-old Ella Whistler – then a seventh grader – was shot seven times by a classmate at Noblesville West Middle School in Indiana. The attack on Whistler left her with broken bones to her neck, ribs and jaw, collapsed lungs and a severed vertebral vein.

As Ella travels on the long road to recovery, which will include starting her eighth-grade year on Aug. 1, her mother Julia said the family has tried to focus on the positives that have come since the shooting.

One of those came in the form of Indiana Legion Riders making a pass in front of Ella and her family on July 8 during a fundraising ride organized by ALR Chapter 341 in nearby Cicero. Close to 400 motorcycles took part in the Ella Strong Ride from Post 341 to Whistler’s Noblesville neighborhood, waving at Ella and her family as they passed.

“It’s unbelievable: the generosity and the love,” Julia Whistler said. “It really shows us there’s still a lot of love in this world: what people feel for those who have been injured and want to help. It blows my mind, really, what people can do in times like this.

“Our whole focus has been getting Ella better, staying positive and focusing on her. The community support has really helped her stay positive and continue to want to heal quickly.”

Post 341 Commander Joseph “Jody” Brown, a past ALR Chapter 341 director, said the Riders wanted to do something for Ella to show “compassion. We care. That little girl is part of our community. This is what we do as Legionnaires and Legion Riders.”

When Chapter 341 set out to do the ride, “we had no idea how many people were going to show up.” The chapter had 250 registration forms and ran out by Sunday afternoon. A goal of raising around $5,000 was nearly tripled, with $14,065 coming in so far.

“I didn’t know (what to expect), to be honest,” said Chapter 341 Director Dave Baughman, a marketing specialist at The American Legion National Headquarters. “It was kind of like ‘keep it simple and effective.’ It was controlled chaos, I guess.”

But as the day went on, more and more motorcyclists showed up to participate – some other Legion Riders, and some members of other motorcycle clubs.

“It’s great to see everybody that we know ride for a good cause,” Baughman said. “On (The American Legion) Legacy Run we say we do it for the children. This really was for this little girl, to do whatever we can to help her family out, whether it’s additional medical issues, further her education, anything like that.”

Legion Riders from all over the area, including Chapters 497 and 64 (Indianapolis), Chapter 331 (Brownsburg) and Chapter 469 (Frankton) took part in the ride. Dan Singleton, a Legion Rider from Chapter 67 in nearby Sheridan, wasn’t going to miss a chance to show support for Ella and her family and said he got goosebumps riding past her.

“It’s a very strong community here in (Hamilton County),” he said. “That could be any one of our children at any of the schools. It was good to do something for the family.”

Singleton said the Legion Riders in Hamilton County “are all about helping out people in the community, no matter if they’re a veteran or not. If they’re a family in need we’re there for them.”

The day prior to the ride, Baughman and Brown presented Ella with a Legion Riders vest and made her an honorary member of Chapter 341. “The dedication of the special vest was unbelievable,” Julia said.

Brown said that rides like the one for Ella further separate motorcyclists from the stereotypes associated with them. “People have this image … of this big burly guy with tattoos, a braided beard and whatever. They think they’re just a bunch of Hells Angels types,” he said. “They’re not. They’re big teddy bears, most of them. They’ve just got big hearts.

“I think more than anything else, (the Legion Riders) have raised awareness, not just in Indiana but even nationally,” about who we are and what we do. We just have the tremendous opportunity to make a lot of difference in the lives of veterans and our communities.”