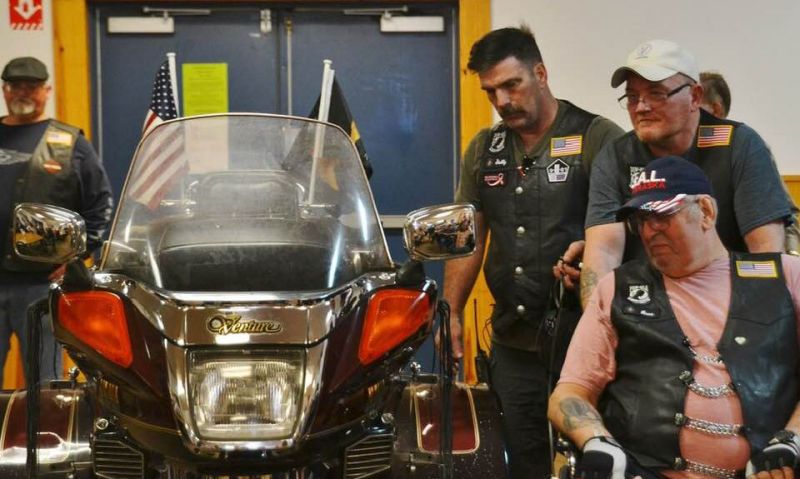 Russ Ash went into the hospital for knee-replacement surgery, but an aneurysm behind his knee caused a blood clot that eventually resulted in the amputation of the leg. That left the 66-year-old Ash, a member of Sons of The American Legion Squadron and American Legion Riders Chapter 310 in Gibbon, Neb., with the prospect of never riding a motorcycle again.

But fellow Squadron and Chapter 310 member Donnie Endecott wasn’t about to let that happen. Within a matter of two months, Endecott and his fellow Legion Riders arranged for Ash to get a Yamaha Venture Royale 1300 trike that will allow him to continue what has been more than five decades of motorcycle riding.

“When we went up to the hospital to see (Ash following his surgery), he was OK with the fact that he was losing his leg. He was dealing with it,” said Endecott, who has known Ash for more than 50 years. “But he was really disappointed because he didn’t think he’d be able to ride.”

Endecott knew Henry Meza, a mutual friend and amputee who had recently purchased a new trike, and reached out to him to see if he still had his old one. Finding out Meza did, Endecott said “I want it. Somehow I’ll figure out who to get it, but I do want it. That’s where it all started.”

Endecott took his plan to his fellow Legion Riders. He, Chapter 310 Director Steve Kautz and Chapter 310 Road Captain Jason Ruyle checked out the trike and then took the idea to the rest of the chapter.

“We told them this was what we were wanting to do, and we did not want it to come out of our Legacy Fund, so we would appreciate anybody who could reach deep and give whatever they could afford to chip in and donate,” said Kautz, a member of Post 310. “It was brothers and sisters helping a brother.”

The Riders didn’t hesitate, coming up with the $1,800 needed to buy the trike. That didn’t surprise Endecott. “We have got a great group of guys. We are a family,” he said. “What hurts one hurts everybody. Nobody hesitated to give what they could.”

Kautz said Ash is a “brother” to the other American Legion Riders in Chapter 310. “He’s one of ours, and he would do the same thing for us,” he said. “He would bend over backwards to help anyone else out there, and we were not going to let a brother not ride while on our watch.”

The trike was presented to Ash during a fundraiser put on by his family at Post 310 in April. Endecott rode the bike into the post and up to a stunned Ash.

“He had no clue whatsoever that we got him the bike,” Endecott said. “The look on his face … you know. Words can’t describe it. It was very heartfelt, and there was not a dry eye in the place.”

Stepping up to help either one of their own or those in their community is nothing new to Chapter 310, which was formed three years ago and already has 40-plus members. Kautz said the Riders recently put together a five-band event that raised more than $12,000 for community members impacted by the spring flooding in the area.

“We strive to try to be the best at everything we do,” Kautz said. “We want to make sure we get out there and get seen, that everybody knows we’re here, and be known for what we’re doing. That’s just how we operate here. We try to support everybody we can in the community.”