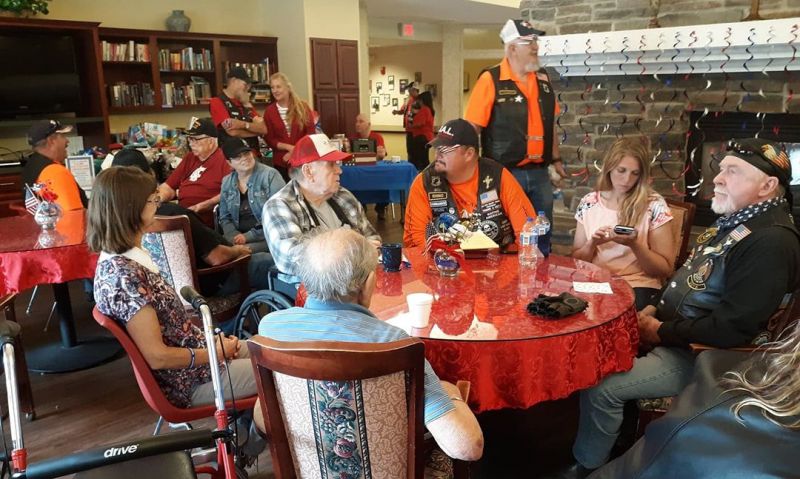 While the military, and veterans, receive a lot of attention during the month of May, many veterans now living in retirement and assisted-living homes sometimes get lost during the Armed Forces Day and Memorial Day celebrations. But a group of American Legion Riders in Omaha, Neb., have spent a day in each of the past three Mays making sure those aging veterans feel appreciated.

The Thank-a-Veteran Tour, which took place May 18, saw Chapter 112 Legion Riders visiting five area retirement and assisted-live facilities, talking to and thanking the veterans residing there.

The idea for Thank-a-Veteran came from a group of Chapter 112 Legion Riders who had done the same program the previous two years while members of ALR Chapter 1 in Omaha. The Chapter 1 program came about from an idea from John “Hammer” Hanzlik, who for years wrote motorcycle riding safety tips for www.legion.org.

“We needed to give back to our aging veterans,” said Chapter 112 Director and Sons of The American Legion Squadron 112 Assistant Adjutant Chris Casey. “They transition into assisted living, and all too often they just don’t have family that visits. They’re kind of forgotten about.”

Casey, who also serves as East Area vice commander for the Nebraska SAL detachment, said the visits are exciting “not only to the veterans there, but the residents, the spouses – their eyes just light up. They talk about this event for weeks after. They look forward to us coming. It’s kind of a big party put on for us.

“Instead of us wanting to just simply give back by hearing stories, sharing some time (with the veterans), they almost kind of go over the top in terms of welcoming us in. And they love the motorcycles, absolutely love them. One of the facilities we were at this year … they had two of the motorcycles brought into the main lobby and had them kind of rev them up.”

Case is the grandson of a Vietnam veteran who served from 1953-1969. Much of what Case’s grandfather told him about his military service didn’t include his time in Vietnam.

“When I meet with these men and women in these facilities, it’s very much like speaking to my own grandfather,” Case said. “I love hearing their stories. I’m a big military history buff. Having it come to life as I talk to them – and seeing them kind of light up that … a young person actually cares about their stories – it means the world to them. And I don’t think they quite grasp what it means to myself and my fellow Riders.”

One of the facilities, Ridgewood Retirement Community, made it a point to thank the Riders, posting on Facebook that “The smiles spread as we heard the motorcycles turn onto our street, handshakes and hugs were exchanged, stories shared, and many friends and memories made! So the next time you find yourself in the presence of one of our countries heroes please take a moment and 'Thank a Veteran.'"

Case said this year he took a notepad with him to write down some of the stories he was told, as well collect birthday information from the residents “and make further contacts so that instead of just once a year, we can go back to important events these facilities have and spend time with veterans who may not have family. We can be the family that comes and visits them at dinner. We can mail them birthday cards and Christmas cards, just stay in contact, instead of just a 'thank you' each year."

Save
Tags: Legion Riders, Sons of the Legion, Honor & Remembrance