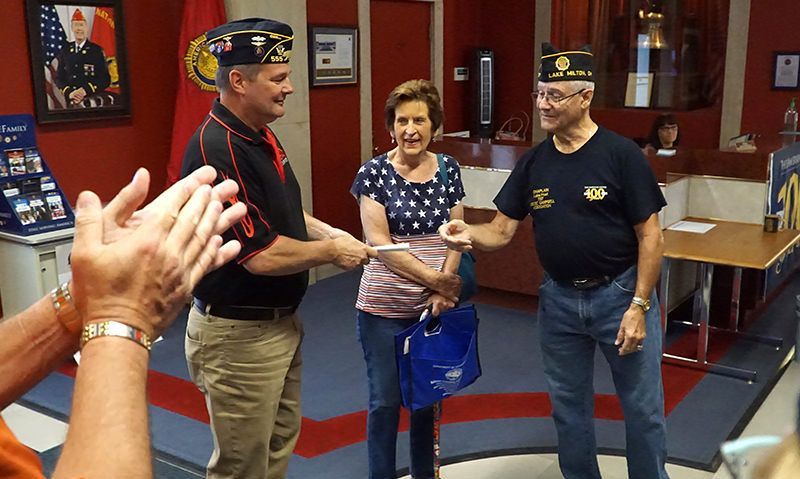 American Legion Riders Chapter 737 Chaplain John Chittock knows that the U.S. Postal Service could get the American Legion Legacy Scholarship Fund donations he and members of his Lake Milton, Ohio, post collect from other posts in the state delivered to American Legion National Headquarters.

But for Chittock, the 660-mile roundtrip drive from Lake Milton to Indianapolis – and the rides to each post to both solicit and then collect donations – are worth being able to collect and deliver donations by hand.

“I think it’s so impersonal to mail things,” said Chittock, who arrived at National Headquarters July 30 to deliver this year’s check – the 12th straight year Legion Riders from Chapter 737 have done so. “When I deliver (the solicitations for donations), I’ve got on there that ‘this is the 13th year that we’ve collected for this great charity. This is also the 12th year that we will hand-deliver your donations to Indianapolis.’ And I go by what I say. I told the people they would be hand-delivered.”

Chapter 737 has been collecting for the Legacy Run for 13 years. This year’s donation of more than $15,000 brought their total to nearly $95,000 for the Legacy Fund, which provides college scholarships for the children of U.S. military personnel killed on active duty on or after Sept. 11, 2001, as well as to children of post-9/11 veterans with a combined VA disability rating of 50 percent or higher.

“It’s for the kids,” Chittock said. “What’s our greatest gift? It’s our next generation. This is a way we can help them.”

“People like knowing where their money is going and what’s happening,” Chittock said. “This would not be possible without all the (Legion posts). We’re just the messengers. We happen to be the ones who collect it.”