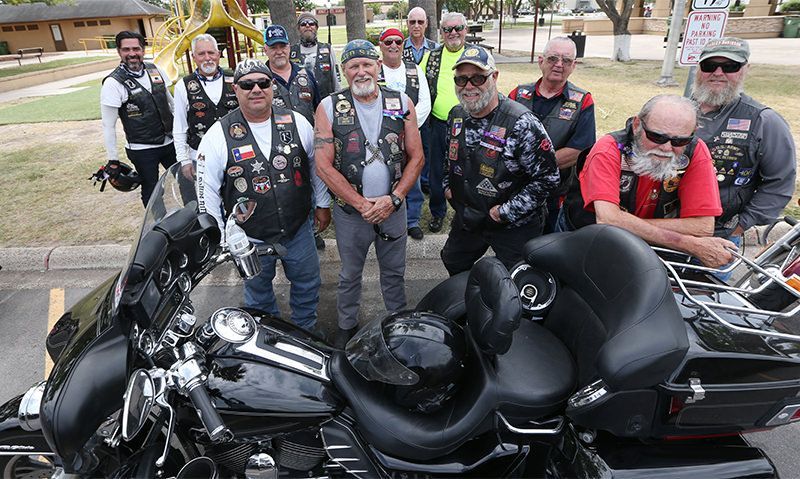 I started out in San Antonio this morning and began my journey to Pharr, Texas, our starting point for the Centennial Ride. Most of the way I was a lone biker along long stretches of Texas highway. About 30 miles out I stopped for fuel and that’s where I ran into my first Legion Rider. As I came out from pre-paying for my gas I noticed a big red space ship with a rider on the back. Turns out it was a Victory motorcycle. The rider was complaining about the wait the way old timers do. I introduced myself to Scooter from Post 575 in Lubbock, Texas. We became fast friends. I fell into formation behind him as we completed the last 30 miles to the post.

We were one of the first to arrive, but it wasn’t long before a gaggle of riders came cruising in. That’s when the joking began.

After greetings and paperwork it was time to get this party started. My goal was to live stream the ride, so I headed out early to set up the camera and live stream. As I was setting up, the group came out and prepared to ride. I learned real quick that when the ride captain says go, you better be ready. I found myself catching up to the back of the pack.

We rode across the Texas border area to Post 102 in Donna, Texas, where we received an incredible reception. It seemed like the whole post came out to receive us. I tried to shake hands with as many people as I could but didn’t get everyone. Inside I found out Post 102 ‘s home is the oldest Legion post in the world. Built in 1919 from bricks made from the local riverbed. At this post they also had the Team Vision half of the Centennial banner.

After Post 102 it was time to visit the border. We rode in formation along Texas farmland as we approached the international bridge separating the United States and Mexico. I learned from my fellow rider, Lucio Gaitan from Post 101 in Pharr, that it may take a few minutes to walk across to Mexico, but up to four hours to cross the border back into the U.S.

After our photo op we took off back to Pharr, but this time escorted by the Pharr police force. What an incredible feeling to cruise through red lights with cops stopping traffic and locals looking on in awe.

We wrapped the day up back at Post 101, where we were treated to a fantastic meal of carne guisada, beans and rice.

Happy to have the riding done we bellied up to the bar and I got to learn the war stories of my fellow riders.