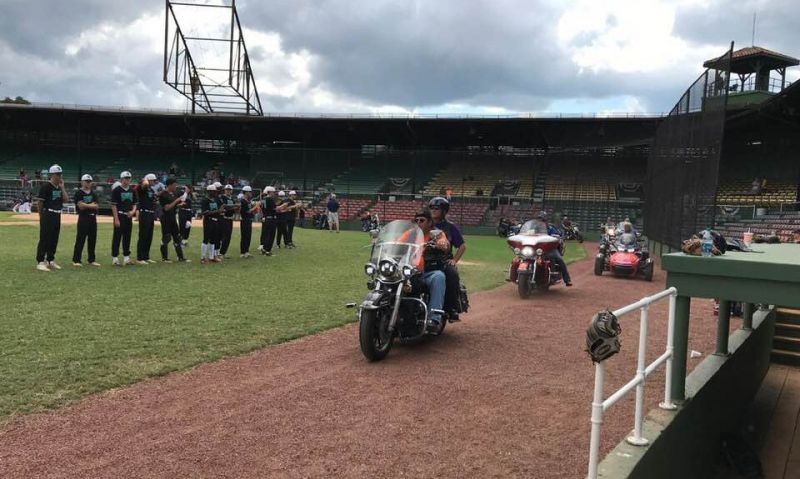 Across the nation, American Legion Riders are known for their fundraising prowess – the more than $1 million raised each of the past five years on The American Legion Legacy Run is just one example.

But for Department of Alabama American Legion Riders Adjutant Tony Berenotto, the Riders have additional roles, including both supporting other aspects of The American Legion and raising awareness about the organization and its programs.

Berenotto and a group of fellow Alabama Legion Riders performed both roles in July, taking part in two rides that hit two different audiences – and two different aspects – of The American Legion. On July 21, the Riders first traveled to the department’s Leadership Camp to meet with youth there before heading to Alabama’s American Legion Baseball State Tournament for an on-field ceremony. While the participants mainly are comprised of Legion Riders from Central Alabama, some this year came from as far as 130 miles away.

The Riders get time in front of the campers to talk about the Legion Riders’ mission, while the directors of each ALR chapter represented also get a chance to talk about something unique each chapter does, as well as their experiences in leadership positions.

“I always tell (the campers) ‘use the word I when you’re taking responsibility and we when we’re given credit,’” Berenotto said. “We just tell them different things that are short enough that hopefully they can remember and start using as they take leadership roles.”

That same day, the Riders also traveled to Birmingham to make a similar appearance at the Alabama American Legion Baseball state tournament at the nation’s oldest professional ballpark, Rickwood Field. The Riders flew the flags of the five branches of the U.S. Armed Forces, as well as the U.S. and American Legion flags, before dismounting for a ceremony. A similar ride took place one week later at the same location for The American Legion Baseball 17U Regional Tournament that included teams from Alabama, Georgia, Tennessee, Missouri, Kentucky and Mississippi.

Hitting the older demographic during the baseball tournaments has a specific benefit. “The Riders are one of the biggest recruiting tools for the Legion and the whole Legion Family,” Berenotto said. “We are reaching an age group that is becoming eligible for service in the armed forces. So we get a lot of questions about our time in service and what we do for the Legion."

Berenotto said the Riders got similar reactions from all three stops. “The bikes get applause,” he said. “Once we stop, (the youth) are allowed to come up to the bikes. They’ve got a lot of questions. They ask ‘what do you guys do?’ It’s a very enthusiastic reaction.”

The American Legion Legacy Scholarship Fund helps ensure higher education is a possibility for children whose parents lost their lives while on duty since the terrorist attacks of Sept. 11, 2001.