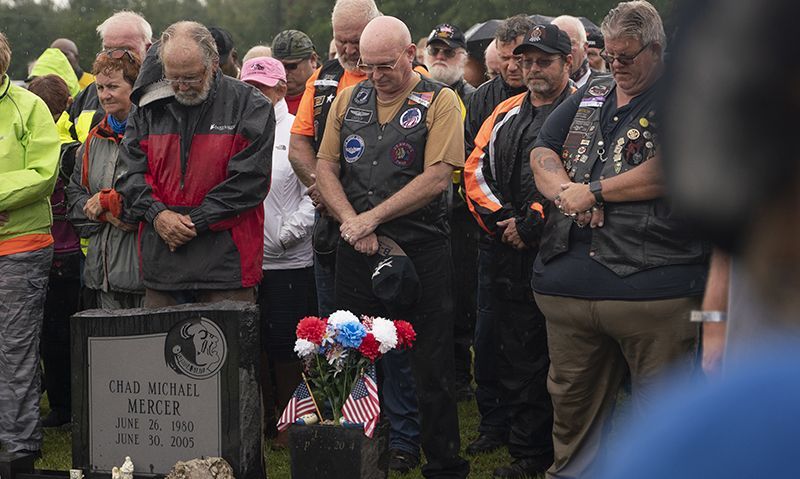 On a day when 245 motorcycles and 47 passengers on the 14th annual American Legion Legacy Run left Lady Lake, Fla., Post 347 at 7:30 a.m., Mother Nature cooperated most of the day. But that cooperation ended in the middle of the afternoon, when the skies opened up and rain poured on the ride in Georgia from Valdosta to Waycross.

But that rain didn’t dampen the spirits of the American Legion Riders. They were in Waycross for a far more important reason that the weather.

At Kettle Creek Cemetery on Aug. 18, the Riders parked along Carswell Avenue, dismounted from their bikes and headed to the grave of U.S. Army Sgt. Chad M. Mercer, who was killed during combat operations on June 30, 2005, in Baghdad at age 25. There, the Legacy Run participants watched as Mercer’s mother Dorothy placed a wreath at his grave. The Legacy Run’s honor guard displayed the colors, while bugler Bob Phelps sounded Taps.

The turnout of complete strangers there to honor her son moved Dorothy, who attended the ceremony with Chad’s sister Lara Carter, his wife Pam and two of their three children.

“It’s overwhelming,” Dorothy said. “It’s such an honor and such a privilege. And it means so much to me (in my heart) knowing what they’re doing for my son. Losing him was awful. But people remember him. And that’s what I want them to do: remember Chad.”

Lara said seeing the 200-plus Legion Riders brave the rain to honor her brother made her “over the moon. I love it. I am just so proud of (Chad) and his service, and that people like these are coming out to remember him and to pay their respects for someone they don’t even know."

“I lost a soldier in Desert Storm,” said Granderson, his voice cracking. “I saw the grieving mother … and it just brought back some memories. That’s why I do this ride. I’m riding for his kids. Seeing the grieving mother in the rain was very touching. We’ve got to keep (Chad’s memory alive).”

The stop in Waycross also included a wreath-laying at Doughboy Park in the heart of downtown. The centerpiece of the park is the Spirit of the American Doughboy statue, which was erected in 1935 and sponsored by Ware Co. American Legion Post 10. The statue is a part of the Smithsonian Art Inventory.

Afterward, the Riders headed to a fried chicken dinner at the Historic Passenger Rail Depot, where Knox read a proclamation honoring the American Legion Riders and the Legacy Run.

Honored, with a better view. National Commander Brett Reistad rode the entire day’s journey – including through pouring rain during the leg from Valdosta to Waycross – on the back of Texas Legionnaire Jim Fleming’s motorcycle.

Fleming, a member of Post 194 in Anna, hasn’t missed a Legacy Run and estimates he’s served as the national commander’s chauffeur for at least one leg of the ride eight to 10 years.

“It’s an honor,” Fleming said with a smile. “Plus, I’ve got a trike. Normally, where are the trikes? Way in the back. So I get to see what’s going on, where normally you’re busy trying to make sure you don’t hit somebody or somebody doesn’t smack into you.”

Fuel for the Riders – and their bikes. A mid-morning stop saw Post 57 in Lake City, Fla., rolling out the red carpet for the Riders. Post 57 Commander Rick Cabrera said the post spent a couple days preparing for the stop – which included a full breakfast of scrambled eggs, biscuits and gravy, bacon, sausage, potatoes, fruits and pastries – but said it was worth the effort.

“It’s an honor for Post 57 to have all these veterans come up here,” said Cabrera, ALR Chapter 57’s assistant director. “It’s a lot of preparation, but it was the entire Legion Family doing it.”

The stop at Post 57 also served as an opportunity for the Riders to refuel. J+J Strong brought in two large mobile fuel tanks with multiple hoses attached to fuel up the motorcycles. Stuart Scott, Georgia’s Third District commander, helped arrange the fuel delivery.

“This fuel company is in the Third District, and they do a lot of fuel distribution, but they also do all the storm work in the region,” Scott said. “They go into the Carolinas and into Florida and do fuel work when the fuel grid’s down and fuel companies can’t dispense out of the ground. So when I heard about (the Legacy Run) coming here, I knew that they would be able to dispense fuel on the premises.”

The honor is in the mission. In Valdosta, Ga., Post 13 provided bagged lunches of hot dogs, chips and drinks. Both Valdosta Mayor John Gayle and Lowndes County Board of Commissioners Chairman Bill Slaughter were on hand to read proclamations honoring the Legacy Run. Also present were Department of Georgia Commander Eddie Asberry and Georgia’s Alternate National Executive Committeeman Phil Youngblood, a member of Post 13.

Post 13 Commander Rod Pedersen, who also is the Sons of The American Legion squadron commander and immediate past ALR Chapter 13 director, said the post had been preparing for the Legacy Run stop since July, that included prepping the food and helping arrange law-enforcement escorts. “We all work as a team here,” Pedersen said. “It was one big family.”

And although having ride stop at his post was an honor, Pedersen said the ride’s mission was what mattered. “They’re raising money for a scholarship fund, and to me that’s the bigger honor,” he said. “We get to participate in that. “