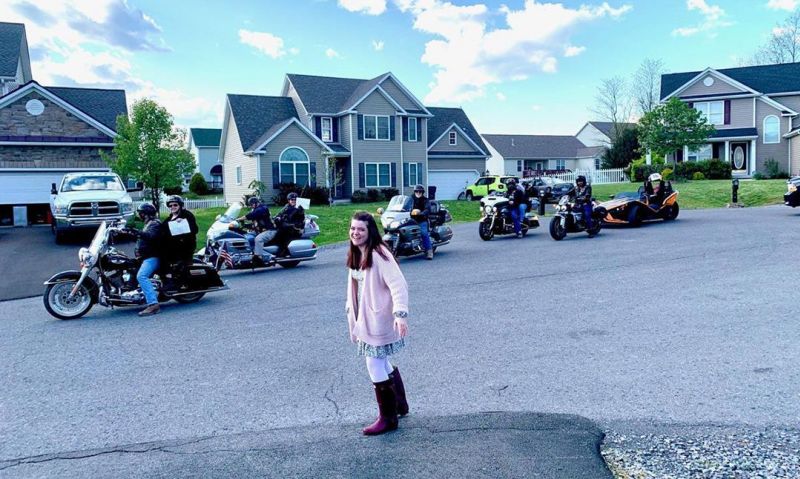 Stay-at-home orders across the country have changed the way students have finished out the school year. Proms and graduations became virtual events, while classroom instruction turned to e-learning.

And for one 16-year-old in Inwood, W.Va., the coronavirus pandemic meant spending her sweet 16 birthday at home with no chance of a real party. But thanks to American Legion Riders Chapter 14 in nearby Martinsburg, the young woman still got a party, of sorts.

Paige, the birthday girl, had already gotten various birthday wishes from family and friends through social media, text messages and videos. And even her neighbors from across the street, American Legion Riders Chapter 14 Director Ken Moneagle and his wife Julie, had placed a banner on their porch wishing her a happy birthday.

But Ken wanted to do more. So he reached out to fellow Chapter 14 Legion Riders and arranged for them to show up that evening. A text message to Paige’s mom, Adrianne, brought the family outside, where a parade of motorcycles were coming down the street to their house. The group held up signs with birthday wishes, revved their engines, and stopped to give Paige a gift, sing “Happy Birthday” and talked with her.

Moneagle said Paige was “totally elated” when the Riders showed up. She had no idea. It was a pretty good, happy moment.”

Though none of the other Riders knew Paige or her family, Moneagle said the birthday surprise was an easy sell. “It’s just what we do in the community,” he said. “I told our guys, ‘we do a lot of things for the veterans, but we also do things for the community. And that’s important, to be seen doing good things in the community. If we want their help to come to breakfasts, to dinners or whatever we’re doing, we have to be supported by them. So why not support them?”

The effort made an impact on Paige and her family. “The only (Riders) who knew our family were Ken and his beautiful wife, Julie,” Paige’s mom wrote to the Journal. “All the other members of the American Legion answered Ken’s call to make a 16-year-old girl’s birthday special simply because they are good, kind people. These veterans served their country, and they continue to serve their community. Amazing.”

Service First, Fundraiser Follows. In addition to conducting a much-need blood drive, SSG Michael A. Dickinson II Post 257 in Battle Creek, Mich., has been performing a valuable service while raising funds for its programs.

Currently, Michigan residents aren’t allowed to return glass bottles and cans. Members of Post 257 have been collecting cans and bottles from residents to return them once restrictions are lifted.

“In about two weeks, we’ve collected an absolute mountain of returnable containers,” Post 257 Commander Brian Mohlman said. “Not only does this work as a great fundraiser … least every other person that makes a donation is eligible to become a Legion Family member. We’re thinking outside the box.”

More from American Legion Family efforts to support their communities during the coronavirus pandemic.

American Legion Riders from different Arizona chapters were part of a motorcade with Northern Arizona VA Health Care System (NAVAHCS) employees that made a 200-mile trip from the VA facility in Prescott to the Hopi Reservation to deliver boxes of food, bottled water and other donated products. The donations went to approximately 80 homebound veterans and their families who are members of the Hopi Tribe and the Arizona Tewa people.

• With some of services shut down due to the coronavirus leading to reduced staff, Laguna Woods Village retirement community had no one to raise and lower its clubhouse flags on a daily basis. American Legion Post 257 in Laguna Woods was contacted, and since then members of the post have been raising and lowering the flags daily.

• Newhall-Saugus American Legion Post 507, Santa Clarita Grocery and other local organizations teamed up to provide free lunches as a way to recognize National Military Appreciation Month. The effort resulted in 200 hot dogs provided to veterans and their families while observing social distancing. A similar lunch is scheduled for May 23. “The American Legion is a local organization … dedicated to welfare of veterans, community service and patriotism, and this event pretty much melds all of those together,” said Sons of The American Legion Squadron 507 Commander Mike Merlo told KHTS.

Ezra Woods Post 31 in New Milford conducted a food drive to make a large donation to the Milford Food Bank. “Our goal is always serving the community, state and nation,” Post 31 Commander Jeff McBreairty said. “We hope all the food items will be enjoyed by many residents in New Milford.”

In addition to serving up weekly curbside meals, members of Post 37’s American Legion Family in Ames recently heard that the vending machines at the Iowa Veterans Homes were out of snacks because vendors currently aren’t allowed to restock them.

Legion Family members collected candy bars, snacks and other treats and delivered them to the veterans home.

“It really does bring tears to the eye almost of how much people think about our residents, think about our veterans,” Aimee Deimerly-Snyder, Volunteer Services Coordinator at the Iowa Veterans Home, told WHO-TV. “And it really does make a difference knowing people are thinking about them.”

American Legion Post 82 in Winnebago has been providing free meals three nights a week to any veterans or other community members in need.

In appreciation for Jordan’s service as a U.S. Navy interpreter and parachute rigger, Post 1214 charter members Mary Clapper and Chaplain Jan Lile presented her with a Quilt of Valor made by the Ozark Piecemakers Quilt Guild.

For the past six years, Morvay-Miley Post 524 in Ocean City has provided expense-paid vacations for returning military men and women, getting donations from both local residents and businesses to make it happen. When the coronavirus pandemic shut down some of those businesses, Post 524 decided to repay their generosity.

• After a 32-day stay in the hospital, American Legion Rider Ron Jarvis was greeted as he left the hospital by nearly a dozen fellow Riders from ALR Chapter 574 in Hudson Falls. The Riders provided Jarvis with an escort home. “It was amazing,” Jarvis told The Post Star. “It made me proud of being a vet.”

• In Black River, American Legion Post 673 spent a Saturday afternoon grilling and then handing out 300 free barbecue chicken dinners. “You know, we are grateful and we love the Village of Black River. We do everything we can for the village, and the village does a lot for us,” Post 673 Commander John Charbonneau told WWNY-TV. “We just have a great bunch of people you can see, that enjoys everything they are doing for our Legion.”

• In Central Square, Post 915’s America Legion Family found out about a food program shortage in the Central Square Central School District (CSCSD), which feeds around 1,600 children who qualify for free or reduced meals. But that need has gone up since the coronavirus hit. So Post 915’s Legion Family presented CSCSD Superintendent Tom Colabufo with the check for $2,500 for the school food pantry.

• In the Bronx, American Legion Leonard Hawkins Post 156 and Boy Scout Troop 211 have been assisting City Island Strong in making home deliveries of groceries for local residents worried about going to the grocery store. The effort also is providing hot meals to residents.

After the Dayton VA Medical Center went to a lockdown, allowing entry to only staff, patients and those veterans who use the facility for hospital care, American Legion Auxiliary Unit 526 in Fairborn was kept from delivering its normal volunteer services.

So Susan Masten, the American Legion Auxiliary’s Department of Ohio chief representative at the Dayton VAMC and a Unit 526 member, reached out to the facility to see what her unit could do to help.

A request for cloth masks for the facility’s outpatients to use was made, and the unit immediately responded by purchasing $300 worth of masks. Other Auxiliary units are donating funds to purchase more masks.

• American Legion Post 952 in Hookstown has been providing homemade meals and food baskets for veterans and elderly residents in the community since the beginning of this pandemic.

When Deborah Tokarz was looking for a kitchen to prepare meals for local medical workers through her “Feed Our First Responders” program, she turned to Major Charles A. Ransom American Legion Post 186 in Midlothian.

The post offered up its kitchen, and its American Legion Family members have begun helping Tokarz prepare the meals being distributed to area hospitals and emergency rooms.

“They’ve been so kind and generous,” Tokarz told the Chesterfield Observer. “If it wasn’t for their generosity, I’m not sure how we would have done this,” says Tokarz of the American Legion Post. “Everyone has a hand in it.”

In the past seven weeks, the nonprofit has distributed more than 19,000 individually packaged homemade meals to various health-care facilities.

“We figured that was the least we could do for the folks who are putting themselves on the frontline,” Post 186 Quartermaster Richard Hahn told the Observer. “I always tell people, the pledge we took never expires. We find a way, somehow.”

American Legion 143 in Twisp was recently contacted by the family of a veteran who recently had passed away. His family had been mailed the veteran’s casket flag, rather than having it presented to them.

So Post 143 First Vice Commander Keith Morden and Sergeant-at-Arms William Robinson coordinated a flag ceremony so that the flag could be properly presented to the widow, all while maintaining social distancing.