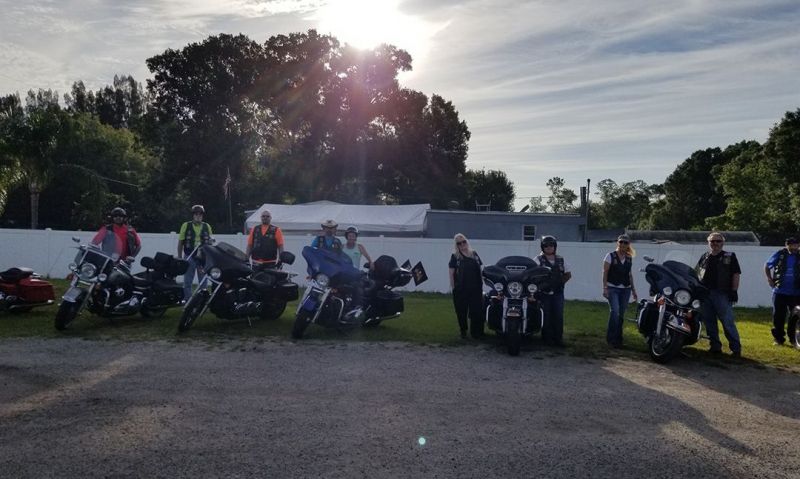 In 2013, American Legion Rider and Panama City (Fla.) Post 392 Legionnaire Mike Kirchoff started an in-state Legacy Run to help raise money for The American Legion Legacy Scholarship Fund. The ride morphed into the Unity Ride in 2018; this year’s ride was scheduled to start in both Marathon and the Florida Keys and come together in Kissimmee.

Then the coronavirus hit, shutting down much of the country and cancelling American Legion activities across the nation. Conducting a traditional Unity Ride wasn’t going happen, but the Department of Florida American Legion Riders weren’t going to let 2020 come and go without some version of its biggest ride of the year.

So from April 26 to May 26 the department staged its Virtual Unity Ride, getting participation from Legion Riders across the state. A goal of raising $50,000 – set originally for the Unity Ride and not altered for the virtual version – was surpassed, with more than $60,000 collected for the Department of Florida’s PROJECT: VetRelief Suicide Prevention Initiative.

“(Suicide prevention) is pretty close to a lot of guys’ hearts,” said Wineland, a member of American Legion Post 129 in Jacksonville Beach. “Those who have been close to it understand it and how important it is. We didn’t want (2020) to go by without trying to do something.”

Florida Legion Riders were urged to ride 22 miles in honor of the veterans who daily take their own lives. They were asked to share their efforts on social media using a photo and the hashtag #iRideforthe22.

The effort was divided into districts, with each district receiving points for ride registrations, dollars raised and photos posted using the hashtag. Florida’s District 15 won the competition – and a trophy – after registering 57 Riders, raising $14,477.38 and posting 81 photos. Town & Country Memorial ALR Chapter 152 in Tampa alone raised more than $10,000.

Wineland said he originally thought if the virtual ride could raise a third of the $50,000 goal “that would be a homerun. But we broke the goal. With people staying home and being bored and wanting to do something, they started riding. And it was just one hell of an experience.”

Riders Support Community, Bridge the Gap. In El Paso, American Legion Riders Chapter 58 has been staying busy during the coronavirus pandemic. Most recently, the chapter provided a 92-year-old Navy veteran with a drive-by birthday salute and teamed up with ALR Chapter 598 in Horizon City to honor 2020 high school graduates in both El Paso and Horizon City.

For ALR Chapter 58 Historian and U.S. Army Sgt. First Class Jose Pierce, events like both rides are important for the Legion Riders to build a relationship with its community.

“Without the local community, things can’t thrive. Programs don’t thrive,” said Pierce, whose son Isaiah graduated from Chapin High School and was honored on one of the rides. “In my community, on my street, people were coming out and looking at it like ‘heck yeah.’ It just brought the community closer together.”

The 39-year-old Pierce currently is on active duty at Fort Bliss, with five deployments to Iraq and two to Afghanistan under his belt. He sees the Legion Riders as an opportunity to reach out, and appeal to, younger veterans. He’s been using social media to share what Chapter 58 has been doing.

“I’m trying to reach members of my generation,” he said. “I’m trying to bridge a gap that I see, and educate those that are my age and younger.

“A lot of soldiers, we find things we can do that take our mind away from our work. A lot of veterans that I hang out with … we like to do an activity. Riding’s perfect for that. A lot of soldiers love riding motorcycles. It’s a good pastime. ALR can help bridge that gap.”

The following are examples of what other American Legion Riders across the country have been safely doing during the era of coronavirus, staying at home and social distancing.

Members of American Legion Riders Chapter 111 in Tampa donated their time and effort to building an outdoor smoking area for VFW Post 424.

• On Memorial Day in Grand Island, ALR Chapter 53 raised flags and did a ride to honor the annual Run to the Wall. The chapter’s Legion Riders also drove by the Central Nebraska Veterans Home and the Grand Island VA Medical Center.

• American Legion Riders Chapter 1 in Omaha rode to three veterans cemeteries, parked and rendered a slow salute to their fallen brothers and sisters on Memorial Day.

The chapter has supported other rides in local communities and will stage its 15th annual charity ride in July, this year benefitting Vets Peer to Peer Outreach. And ALR 925 also plans to provide an escort for the Vietnam Memorial Traveling Wall when it comes to town.

“One of the best things about the Riders is that motorcycles lend themselves to social distancing quite well!” Chapter 925 said on Facebook.

With area Memorial Day parades cancelled, American Legion Riders Chapter 535 in Bellville teamed up with AMVETS Riders and other motorcycle organizations to put on their own parade.

• American Legion Riders Chapter 466 observed Memorial Day by conducting a motorcycle parade using the normal Marietta Memorial Day Parade route. The parade ended at the Mariette Cemetery, where taps was played and a wreath was placed to honor fallen veterans. Chapter 466 also took part in a parade to honor the Donegal High School Class of 2020 on June 3.

Members of American Legion Riders Chapter 9 in Spokane are participating in escorting the remains of a veteran from his sister’s house in Florida to its final resting place in Washington.

Air Force veteran Chuck Bondi passed away in September 2019, and his ashes were given to his sister. Wanting to get them to Bondi’s daughter in Washington but afraid to mail them, the sister connected with Patriot Guard Riders, who are going to provide the ashes with an escort through 12 states in eight days.

At or around each state line, a new group of riders will take over as escorts. Chapter 9 Legion Riders will be helping provide part of the escort.

Chapter 9 Legion Riders also did a parade of flag at local cemeteries and did a support ride to Mann-Grandstaff VA Medical Center in Spokane on Memorial Day.

The District 6 American Legion Riders will be riding through area towns on July 4 with flags “just to let them know we are still here.”