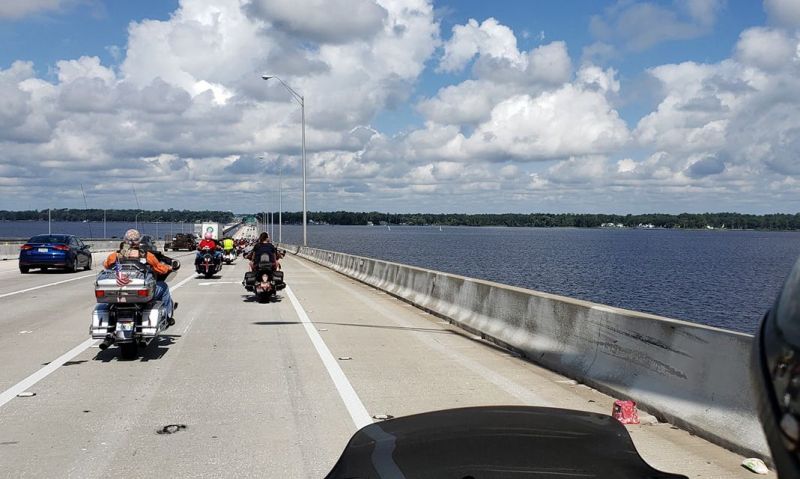 Mandarin "Fallen Heroes" American Legion Riders Chapter 372 in Florida has made it a yearly tradition to stage a ride to assist the Department of Florida’s PROJECT: VetRelief, which focuses on ensuring that transitioning servicemembers receive needed support in three areas: emergency assistance, benefits support and community engagement.

But knowing that a stay-at-home order and the shutdown of businesses throughout the state had resulted in a very negative financial impact on Legion posts in the department’s District 5, ALR Chapter 372 came up with an alternate plan.

Observing social distancing and dividing into two groups for safety reasons, the ride raised money to assist the most at-risk posts in District 5. Posts along the way provided hospitality, food and donations. A taco dinner was provided by Post 129 at the conclusion of the ride.

Mandarin Fallen Heroes American Legion Riders Chapter 372 Director Joe Maltese said the idea to change the focus on this year’s ride came from a Chapter 372 member. “The words came out of his mouth, and everybody jumped on it like ‘yeah, that’s what we should do,’” said Maltese, who also serves as District 5 ALR assistant district chairman.

District 5 ALR Chairman Denny Luke, a member of Post 316 in Atlantic Beach, agreed. “If the post flounders, it disbands, and then there is no one to do the good work,” he said. “We absolutely have to have a strong post that’s viable in every aspect to continue doing what we do. We’re a program of the post, and if the post goes away, we go away.”

To ensure any funds raised were allocated fairly, forms were sent out to all 19 posts in the district to let each post share how it had been impacted financially by the coronavirus shutdown. Three posts ended up returning the forms requesting assistance.

The ride ended up netting around $3,000; Maltese was thrilled with both the results and the participation. “We were thrilled. That ride normally gets between 60 and 80 bikes, max,” he said. “To have that many more bikes, I thought, was tremendous. And really, we didn’t solicit any money from the general public. It all came from participants in the ride.”

The money raised will be divided evenly among the three posts. Maltese said it was important during this difficult period for the Riders to step up for their fellow American Legion Family members. To be able to do so felt “amazing," he said. “We had a debrief at our normal Riders meeting on (June 21) and the room was all smiles. They were so excited that they were going to be able to help.”

For Luke, the effort wasn’t a surprise. “I see the Riders as being a group of motivated individuals that don’t just go to the post and cocoon themselves in the post,” he said. “They’re active, they’re out and about in the community.”