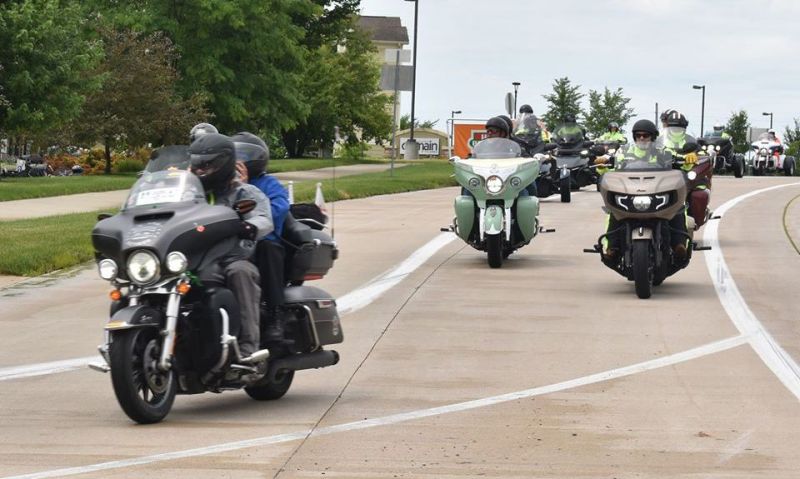 After throwing the idea around for a few years, The American Legion Department of Oklahoma decided to schedule an in-state Legacy Run for this year. Then 2020 happened.

The coronavirus pandemic put a stop to multiple large American Legion Rider events, including the national Legacy Run and many in-state rides.

But in Oklahoma, the consensus among posts was that their inaugural ride would go on, “if we can do it in a safe way,” said Oklahoma American Legion Riders Director Mike Marxen.

“We started planning it earlier in the year, then everything shut down,” said Marxen, a Paid-Up-For-Life member and current commander of American Legion Post 1340 in Oklahoma City. “When our department said we could start having the post meetings … the consensus in the post was ‘We need to do it.’”

The ride started with 20 Riders at Waggoner-Trimble Post 12 in Warr Acres on July 10 and finished up with 29 at American Legion Post 34 in El Reno July 12. In between, multiple posts provided lunch and dinner, water breaks and an occasional refuge from the rain. “Most of them, their response was ‘what can we do for you?’ when I asked them (to host a stop),” Marxen said.

Other stops along the route included visits to veteran and military memorials and parks to place wreaths. Also included was a trip to the Cherokee Nation W.W. Keeler Tribal Complex for a wreath-laying ceremony at the Cherokee Warrior Memorial in Tahlequah, Okla. Cherokee Nation Principal Chief Chuck Hoskin Jr., Cherokee Nation Department of Veterans Affairs Secretary Joe Crittenden and others were there to greet the Riders and took part in the ceremony, which can be seen here.

“It was sort of humbling for us,” Marxen said of the stop. “That was cool.”

The ride covered Northeast and Center Oklahoma; Marxen said the 2021 ride would likely hit the southeastern portion of the state.

The effort raised $3,071 for The American Legion Legacy Scholarship Fund, which raises money to cover college expenses for children whose parents are U.S. servicemembers who died while on active duty on or after Sept. 11, 2001, or whose parents are post-9/11 veterans with a combined Department of Veterans Affairs disability rating of 50 percent or greater. More donations are expected, Marxen said, adding that the American Legion Riders have taken the responsibility of raising money for the Legacy Fund “as ours.”

A veteran of at least eight national Legacy Runs, Marxen said the national ride has given him an opportunity to “get to see people from all over the country. That’s one of the things: the camaraderie. When we show up every year it’s like a family reunion. I’ve rode with different groups over time (on the Legacy Run), and people from groups I’ve rode with previously, we seek each other out and say ‘hi, how are you doing?’”

“As Chairman, to see our Riders committed to raising funds for the kids, even through the many hurdles they have to face due to COVID-19, is inspiring,” Clark said. “What impressed me the most is the level of coordination and organization that went into each ride, making sure that proper safety protocols were followed to keep the participants safe. One of the things I have always admired about ALR members is that no matter the challenge, they find a way to overcome it and always do so safely and professionally.”

Missouri’s state ride traveled 700 miles over three days, with the route resembling the outline of a star and traveling through 23 counties with different COVID-19 restrictions. A total of 63 American Legion Riders on 46 motorcycles took part in the ride, which made stops at a dozen American Legion posts and the Missouri Veteran’s Home in Warrensburg. The latter stop including a rolling thunder parade around the home due to social distancing.

Missouri American Legion Riders Director Don Gerspach said that while a lot of planning went into the state ride, no one at the time expected to “have to deal with American Legion posts, hotels and restaurants being closed or under occupancy restrictions due to a pandemic.” But Gerspach said Missouri State Ride Captain Bob Norris, a veteran of past state rides, “continued the planning and coordination, confident that by the time late June came around, enough of the restrictions would be lifted to have a successful event. He was determined to make this ride happen. And his determination paid off for the Riders.”

Between donations received along the way, fundraising efforts and auctions, more than $43,000 was raised for the Legacy Fund.

In a message on Facebook, Gerspach praised the Missouri Riders for their efforts. “We had a very successful fund-raising event, collecting and raising thousands of dollars in support of veterans’ children across the nation,” he wrote. “There is just no way to capture in words, the pride I have, and obviously you all have as well, in the great things the Missouri American Legion Riders do every day. Thank you all from the bottom of my heart.”

Heading east, Virginia wrapped up its in-state Legacy Run July 18 at the Virginia Riders Rally at Post 77 in Strasburg after departing from Post 75 in Gloucester on July 17.

Randy Gunn, who serves as the Virginia American Legion Riders East Regional assistant director and organized the department’s first in-state Legacy Run in 2018, said there was a doubt in his mind that 2020 would still allow for another ride.

The state was at one point allowing gatherings of just 10 people, prompting Gunn to originally plan to have the ride take off in flights. But before the start date, Virginia had expanded gatherings to 250 participants, so the entire ride of 146 participants was able to start together.

In addition to the ride, Virginia’s Legion Riders also conducted raffles, while Gunn created a coin for sale. The collective effort resulted in a $32,000 contribution to the Legacy Fund. A patriotic-themed truck led the procession of motorcycles, which made stops at five American Legion posts along the way. Gunn also prepared a four-page flyer that included information on the Legacy Run that he was able to hand out to people along the route’s stops.

Gunn said this year’s in-state Legacy Run felt a little different. “Normally it’s for the kids of (military) who are deceased or of veterans who are 50% disabled,” he said. “But this year, to me, it almost seemed like the ride was also for everybody in the ride. I felt like the guys and girls who depend on me to organize this, there was more of a connection of ‘oh my God, thank you. We can do something together.’ Maybe that’s why we ended up with more money this year than we ever have.”

Looking to the future, the North Carolina American Legion Riders have an in-state Legacy Run planned for Oct. 1-3. In addition to collecting for the Legacy Fund, the ride also will collect donations for American Legion posts having difficulties due to the coronavirus pandemic. More details will be available soon via

The NC Legion Riders will be traveling across North Carolina Oct. 1-3, stopping at many Legion Posts and picking up donations for The Legacy Fund. Along the way they will be accepting donations in support of those Legion Posts currently having difficulties due to the pandemic.

Registration and route will be available here.

Clark said he’ll also be taking part in North Carolina’s ride. “I know other departments are finding ways to keep the Legacy Fund supported during this difficult and uncertain time,” he said. “It is something I am very proud of.”