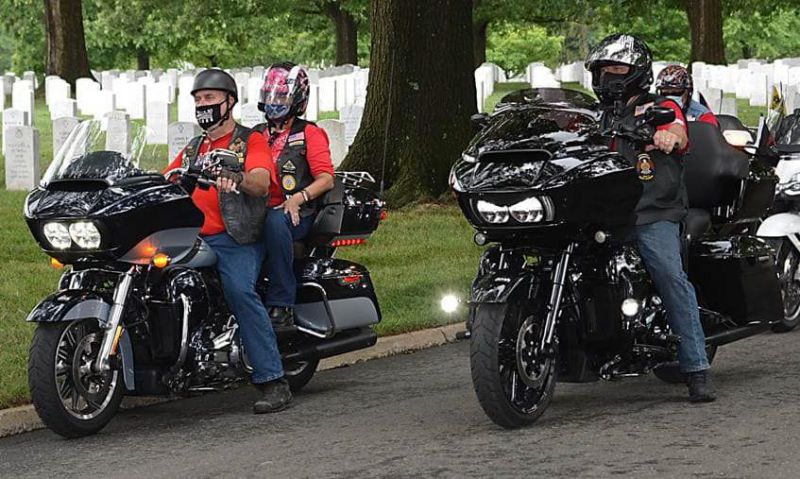 Shankman, a 32-year member of Post 6, took part in two South Carolina in-state Legacy Runs, attended Rolling Thunder in the nation’s capital and was a regular on multiple Patriot Guard Riders missions. He was also a member of Harley Owners Group (HOG).

“He just meant so much to us,” ALR Chapter 6 Director and current South Carolina American Legion Riders Secretary L.Z. Harrison said. “We actually called him our local national treasure. It’s not very often you see a 96-year-old man still riding a motorcycle., participating in Legacy Runs and doing all of that.”

Shankman passed away in February at age 96, and his interment in Arlington National Cemetery had been scheduled for early spring. Members of Chapter 6 planned to provide a motorcycle escort for Shankman and his family from Columbia to Arlington, but the coronavirus put those plans on hold.

But when the clearance was given for Shankman to be interred in late July, his friends in the Legion Riders followed through on their original plans. Traveling more than 470 miles over two days, a group of Chapter 6 Riders first provided an escort for Shankman’s hearse in Columbia, joined by Patriot Guard Riders and HOG members, and then rejoined the hearse at Arlington National Cemetery for a final farewell to their friend.

“I’d always told (Shankman’s family) that whenever it came time, we were ready to do what the family wanted us to do,” Harrison said. “(Their) plan was for us to escort Bernie’s remains out of Columbia. I put the word out to the Patriot Guard, ALR and HOG, and we had 30 bikes show up.”

After getting to Columbia’s city limits, the four ALR motorcycles broke off and took back roads to Washington, D.C., meeting up at the local funeral home and providing Shankman an escort to Arlington. And because the restrictions limiting the amount of people allowed to attend a funeral at the cemetery had been expanded to 50, the Riders were able to observe Shankman’s burial.

“We honor him, and that’s what it was about. It was honoring him and his service. We wanted to make sure we were there for him.”

For video from the escort, click here. For video of the playing of Taps at Shankman’s Arlington ceremony, click here.