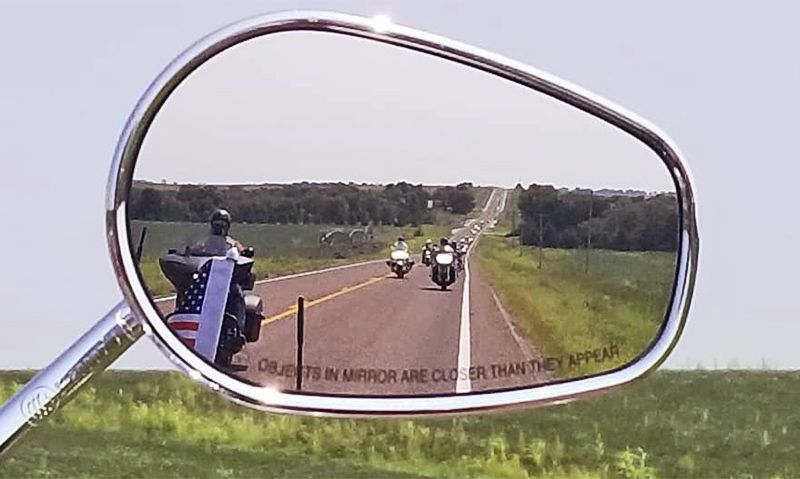 In January of this year, American Legion Post 53 in Grand Island, Neb., chartered its American Legion Riders chapter. Two months later, much of the nation came to a halt because of the coronavirus pandemic.

“It was pretty intense there for a little while,” ALR Chapter 53 Director and Sons of The American Legion Squadron 53 member Greg Martin said. “We had some members that were like ‘well, are we going to do anything or not.’ But we managed to make it through there and survive.”

Chapter 53 is doing more than surviving. On Aug. 22, the chapter conducted its first Freedom & Independence Ride, bringing together 50 or so participants and around 20 passengers from various American Legion posts – for a 135-mile round-trip ride that started in Grand Island and hit Alda, Hastings Juniata, Clay Center and Central City before returning to Grand Island. The ride originally had been scheduled for July 4 but had to be pushed back.

The idea for the ride actually came from ALR Chapter 53’s sergeant-at-arms, Brian Mothers, while Martin’s wife Sarah helped transition the ride into a fundraiser.

Despite the pandemic cancelling many events, Greg Martin said, “Pretty much we all wanted to do this. Everyone hung onto it, and we stuck with the planning steps.” Pushing the event back allowed more time to reach out to larger area businesses for donations to offer up during the event’s silent auction and raffle. Money raised from the entire event – Martin said he’ll have a total Sept. 6 – will go to supporting The American Legion Legacy Scholarship Fund, as well as to support the Grand Island VA Medical Center and the Central Nebraska Veterans Home in Kearney.

Despite being in existence for only eight months, ALR Chapter 53 has already gained a strong focus. “My guys and gals, we’re like-minded,” Martin said. “We’re all here to serve the community, but more importantly we’re here to serve our veterans. We wanted to focus on our veterans, especially during this time with COVID. We had the passion to do it, but even more so when this hit. Whatever we can do to help, whether monetarily or physically, we’ll do it.”

The two-day ride ended up producing just over $20,000 for the Legacy Fund, which isn’t that surprising considering the Department of Minnesota has donated more than $1 million to the Legacy Fund since its creation, including more than $625,000 since 2017.

Deschene, who rides with ALR Chapter 320 in Hopkins and is a member of Auxiliary Unit 630 in Brooklyn Center, said being able to donate that kind of money as a department “has kind of carried over. We have some really generous people that really, really believe in the Legacy Scholarship and what we owe to our veterans. What we owe to their families for their service. It was a good turnout and a lot of generous people.”

LeRoy Bunyan, vice president of the Butler County American Legion Riders, said the ride, raffle and ticket sales combine to generate more than $20,000 a year and supports important missions for veterans in the community. Originally the ride was used to raise money to purchase televisions and other items for use by patients at the Butler VA Medical Center. Later the ride covered the costs of renting a building that to store furniture for veterans transitioning from homeless facilities before the county took over the program.

Now, the funds from the ride pay for bus trips for veterans and their spouses to different military museums and memorials, covering the entire cost of the trip, along with breakfast, lunch and dinner. The post also provides assistance for veterans in need, including assisting with car repairs, paying utility bills – “we kind of pick up where the county doesn’t,” Bunyan said.

Planning for this year’s fundraising ride started in fall of 2019, and Bunyan said there was no talk of cancelling because of the coronavirus. He said other motorcycle groups throughout the state stepped up to assist with purchasing raffle tickets, while Sam’s Club allowed the Riders to set up a table outside of the store.

“We try to do as much as we can for the local vets,” Bunyan said. “The community through word of mouth that we’re not just a bikers group out there riding. They come to find out we escort (military) coming home from overseas. If any veteran passes away around Butler and the family requests it, we’ll stand in a flag line. We don’t care if it’s 90 degrees or it’s 20 degrees.

“We’ve got the reputation around Butler now that the Legion Riders are not a fly-by-night thing. (We’re) there for the veterans, and it really helps us a lot.”