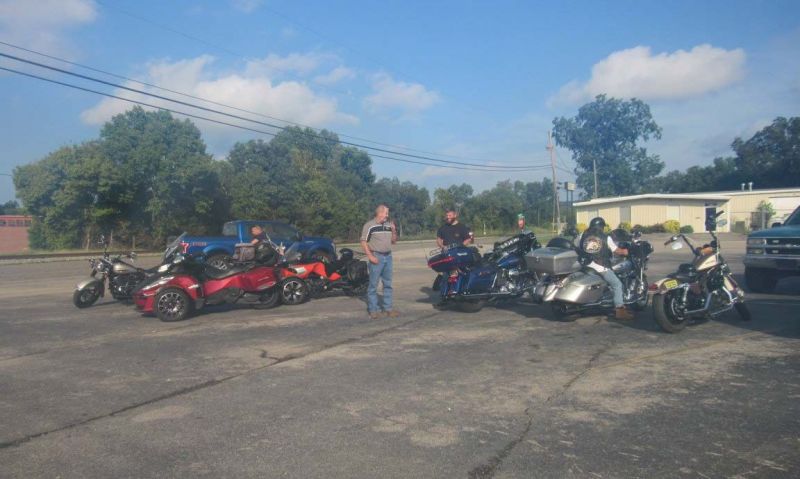 The members of American Legion Riders Chapter 107 in Leeds, Ala., like to consider themselves an active group. “We try to be,” said ALR Chapter 107 Secretary-Treasurer Jamie Levan, a member of Auxiliary Unit 107 and charter member of the Riders chapter. “If we can’t participate in something, we can always donate to the cause.”

Chapter 107 regularly contributes to The American Legion Legacy Scholarship Fund, using rides as one of the ways to raise money. But in the midst of the coronavirus, a ride wasn’t going to happen anytime soon.

So the chapter recently turned to another fundraiser it’s previously used, hosting a bike night at Post 107 that drew around 40 motorcycles in addition to Legion Riders and other members of Post 107’s American Legion Family.

“Consider the state of affairs in Alabama with the COVID … I think we had a pretty good turnout,” Levan said. “It was better than I expected.”

Opening a 'New Door'. In eight years of existence, the American Legion Riders from Helderberg Post 977 in Altamont, N.Y., have become known for their support for various local veterans causes. Chapter 977 regularly supports New York's Run for the Fallen, an event that calls attention to and honors the men and women who have died recently in military service to America; as well as Honor Flight, the Victoria Acres Equine Facility, the Vet House transitional housing program in Ballston Spa, N.Y.; a service dog program, Department of Veterans Affairs outreach programs and other veteran-related causes. The chapter also donates to The American Legion Legacy Scholarship Fund and, locally, has established five local scholarships for graduating students going into a trade school.

When the coronavirus forced Chapter 977 to cancel its large annual fundraising poker run in August – one that typically draws 140 to 180 participants and in 2019 helped raise around $10,000 – its Legion Riders weren’t going to give up supporting their many causes. So the chapter came up with an alternate plan: a Veterans Memorial Awareness Ride.

Starting Aug. 1 and through Sept. 30, the chapter has asked fellow motorcyclists, car clubs and other groups to take part in a self-guided 117-mile ride that features eight stops at local veterans memorials.

The chapter has created a downloadable Google map available for smartphones, as well as a downloadable PDF with a map and directions. A suggested donation of $25 per map and $10 per person will help the chapter continue to raise funds.

The idea came about while “sitting around brainstorming, trying to figure out what else we could do,” Chapter 977 Director Steve Oliver said. “A bunch of us had been riding around looking at different memorials in the area … and we said ‘well, let’s do a veterans memorial ride.’ And then we tried to figure out how.”

With the ride taking place over two months, Oliver said participants “can guide themselves and go when they want. And hopefully they’ll send us a few donations. And if they don’t, hopefully they went and saw the memorials.”

Despite limitations because of the pandemic, Chapter 977 never gave up on the idea of still supporting area veterans through its various donations. “That’s who we are. That’s what The American Legion is,” Oliver said. “That’s what we’re supposed to be doing. Just because one door got slammed on you, well, I’m a Seabee. We’ll cut a hole in the wall and make a new door."

The Riders rode more than 1,200 miles round-trip to deliver the donation, half of which came from Post 177 and the other half from Chapter 177.