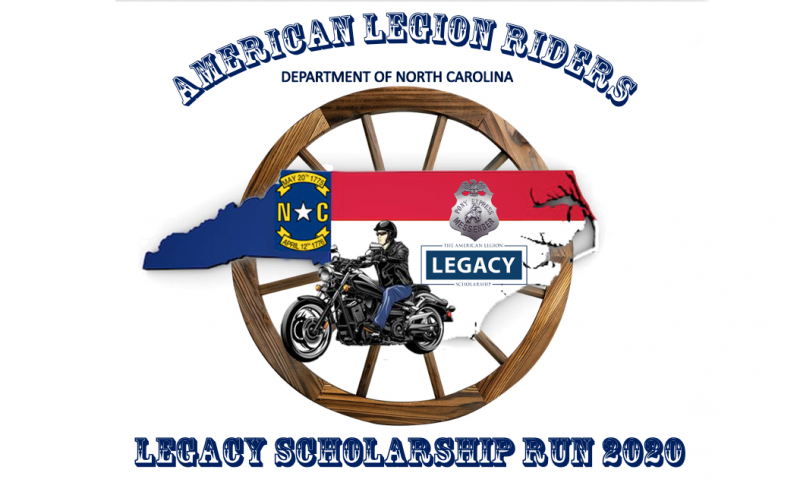 From Oct. 1-3, riders from all over the state will take part in the inaugural North Carolina Legacy Run. Four routes – Eastern, Western, Southern and Central – will depart at some point Oct. 1-3 and eventually arrive at the Vietnam Veterans Memorial in downtown Raleigh for a “Reading of the Names.” Along the routes there also will be wreath-laying ceremonies at the Wilson County Memorial Fountain and the Salisbury National Cemetery – the latter honoring longtime Department of North Carolina National Executive Committeeman Jerry Hedrick, who passed away in 2014.

“It’s kind of been in the planning stages for the last year, year and a half,” Ward said. “We had originally planned it as a ride from the coast to the mountains at the end of October, but our weather in the mountains gets kind of nasty in late October. So we changed it up to early October and put this (multiple routes) program together. We can ride and be socially distanced by just staggering our ride.”

Ward, a past department vice commander and member of American Legion Post 51 in Concord, said the in-state Legacy Run can help bring more “notoriety, if you will” for the state. Ward also believes the ride is an opportunity for the department “to get our act together” in terms of raising money for the Legacy Fund.

Ward said having Oxford be a part of the ride “is an honor and a privilege. That’s the icing on the cake. Bill Oxford’s quite a gentleman anyway, and to have him from our home state and be able to work around his schedule that’s getting busier and busier, he’s going to be a major part of this. And he is our designated ride captain for the whole event.”

Ward said that National American Legion Riders Advisory Committee Chairman Mark Clark, Department of Washington Commander Robert Clark, Department of Virginia Commander Bill Feasenmyer and Past Sons of The American Legion National Commander Joe Gladden will be among other distinguished guests taking part in the ride. Gladden is part of a Maryland American Legion Family contingent traveling to North Carolina to present Oxford with a check for nearly $40,000 for the Legacy Run that was raised during the Maryland Gold Star Legacy Run earlier this month.

More than 80 participants have signed up for the ride. “I’m really quite pleased. We’ve got a good turnout – and that we’ve got some people participating from out of state,” Ward said. “They’re going to be presenting their (Legacy Fund donations), along with our check, to the national commander. It’s made it a big event.”