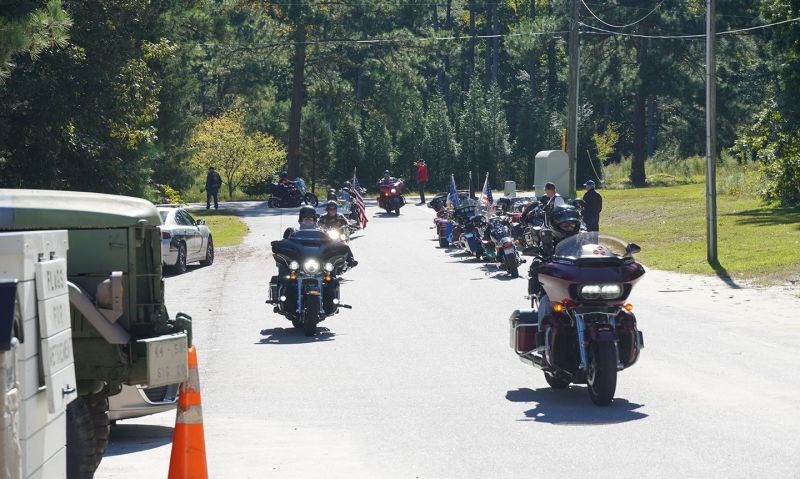 For too long, Department of North Carolina American Legion Riders Chairman Jack Ward had watched what he felt were too small of donations presented on behalf of the department to The American Legion Legacy Scholarship Fund. So Ward decided to do something about it.

With the assistance of “a lot of people,” Ward was able to organize the department’s first in-state Legacy Run. On Oct. 1-3, American Legion Riders from all over the state – as well as Riders from other departments – traveled via four different routes to meet up in downtown Raleigh. Prior to the ride and along the way they raised nearly $23,000, a figure Ward said is $20,000 more than the department’s previous best effort.

“It just warmed my heart to see that we’ve really come along,” said Ward, a past department vice commander and member of American Legion Post 51 in Concord. “I couldn’t be more happy and more proud of all the people in North Carolina. This was not a one-person event. This was a big deal that took a lot of people and a lot of coordination. And to bring out all this participation – and lord willing, the doggone weather was perfect for a change – it was a great sensation.”

North Carolina’s Legacy Run was comprised of four routes – Eastern, Western, Southern and Central – that converged at the Vietnam Veterans Memorial in downtown Raleigh for a “Reading of the Names.” Along the routes there were wreath-laying ceremonies at the Wilson County Memorial Fountain and the Salisbury National Cemetery – the latter honoring longtime Department of North Carolina National Executive Committeeman Jerry Hedrick, who passed away in 2014.

Past Sons of The American Legion National Commander Joe Gladden, Maryland’s Legacy Run co-chairman, said due to the coronavirus pandemic the goal for this year’s ride had been lowered to $20,000. The effort more than doubled that amount.

“What an incredible job by everyone,” Gladden said. "(The Gold Star Legacy Run) was so much more than anything we expected and we look forward to an even more successful weekend next year.”

“That was my first exposure to a Legacy ride,” said American Legion National Commander James “Bill” Oxford, who served as the ride’s honorary road captain. “You hear a lot about it, and you hear about all the bikes … but the camaraderie, the friendships and the relationship that those riders have is what impressed me the most. These folks from all over the country … to see those people willing to make the commitment to ride … it was really inspirational to see the way those people feel about what they’re doing.”

Oxford was supposed to take part in this year’s national Legacy Run before the pandemic forced its cancellation. But he’s been impressed by the efforts of American Legion Riders throughout the nation to continue to raise money for the Legacy Fund.

“I think it exemplifies their dedication. The Legacy Scholarship is kind of their baby, and that’s sort of where they put their emphasis,” Oxford said. “We didn’t get to do the national ride, but I think the individual departments are stepping up to fill the void. Their dedication is exemplary.”

Ward said his department learned a lot in its inaugural in-state Legacy Run. “I’ve already formed a Rider committee for next year, and we’ve just started discussing some of the pros and cons of what we did,” he said. “We found out we made a couple of mistakes along the way. We learned a lot of different things.”

Oxford, a life member of American Legion Post 29 in Lenoir, N.C., praised both Ward and his home department for staging the ride. “I think we need to recognize Jack Ward. He took the bull by the horns and made it happen,” he said. “He created this from scratch, (he) had a lot of help, a lot of advice, a lot of assistance, but Jack Ward was a driving force.

“(And) it shows the country North Carolina is a leader in this organization. I’m as proud as I can be of the North Carolina willingness to step up, take the lead and create this first annual (state) Legacy Run. And I say first annual because I really don’t expect it will be the last. I expect we’ll have many more opportunities to do this as the years go on.”

Ward plans on that being the case. And 10 to 15 years down the road, when he looks back at where the North Carolina Legacy Run started and how it has evolved, it will bring a sense of pride. “One way that I look at it is like a grandfather. I watched my grandkids as they began to grow up,” Ward said. “That’s what I can compare it to. It’s quite a feeling of accomplishment to be able to say I think did something right in my life.”