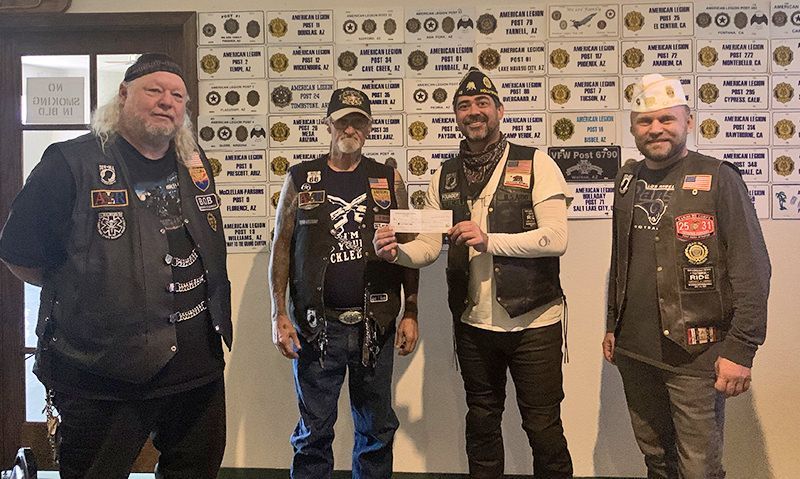 It is the shortest leg of the 2020 American Legion Pony Express Ride, but it was beautiful as we made our way from Pat Tillman Post 117 in Phoenix to our final destination for the day, Heber-Overgaard Post 86 in Arizona.

Because of the short distance, we started a bit later the morning of Thursday, Oct. 8. But by the time we pulled out of the post parking lot at 10 a.m., the temperature was close to 100 degrees. The group consisted of the California contingent Mike, Karl and me, with the addition of Sons of The American Legion Squadron and Legion Riders Chapter 117 member Randy “Ratchet” Blood. Randy, a transplant from Michigan, has only been in Arizona for five years but has come to appreciate the desert landscape and jumped at the opportunity to escort us for this leg of the ride on his three-wheeled trike.

We headed out of town on U.S. 60, east into the Tonto National Forest. The views of the desert landscape – rugged red rock cliffs and towering cactus – were spectacular, but nothing compared to what we would see down the road. We climbed into the Arizona high desert and passed through small towns like Superior and Miami, copper mining country. When we entered the towns, the welcome signs listed not only the elevation in the 5,000-foot range, but also the years the towns were established, many in the late 1800s.

Our first stop was the town of Globe and Post 8, one of the earliest American Legion posts in the state. We received a warm welcome from the riders at the post who had been watching our videos. After some time rehydrating, we had a check-presentation ceremony where members of Post 8 entrusted me with their check to deliver to National Commander Bill Oxford next week. We were then treated to the best Mexican food in town at the La Casita Cafe. Considering our waitress was the niece of Post and Riders Chapter 8 member James Martin, also known as “T-Bone,” the service was great.

After lunch, we refueled before my two buddies from California, Mike and Karl, said their goodbyes and departed back to Los Angeles, with a stop at the Department of Arizona on the way back. We were escorted for a bit by T-Bone, but after 20 miles or so he peeled off and headed back. It was just Randy and me making our way to Heber-Overgaard.

We continued east along 60 and found ourselves passing through the Salt River Canyon with a spectacular view of desert mountains and canyons. For a moment, it felt like we were in the Grand Canyon; I had to look on the map to make sure we weren’t. We took our time and a couple opportunities to pull over and take in the scenery.

It was just after 4 p.m. when we finally arrived at Post 86 in Heber-Overgaard. Standing next to a long row of bikes was Riders Chapter 86 member Todd Harris, who directed us inside. I had met Todd about five years ago while participating on the Rivet Ride with television star William Shatner, who stopped at American Legion posts along the way to Los Angeles. Todd regularly participates in the Legacy Run, which had to be canceled in its normal way due to COVID-19, as one of the advance party. He’ll be leading the Pony Express Ride to Oklahoma City and will use the opportunity to pre-scout locations for next year's Legacy Ride to the national convention in Phoenix.

After a couple refreshers and hand shakes, I left to check into my room, park the bike, return to the post for a 7 p.m. toast and whatever shenanigans may come.