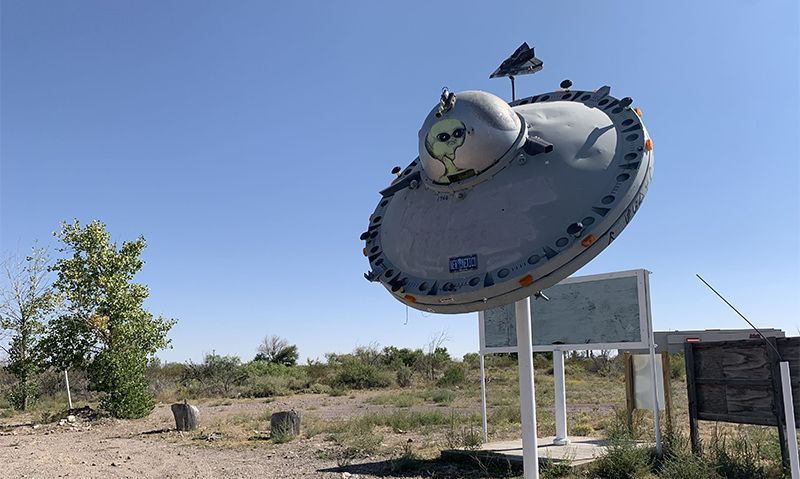 American Legion Pony Express riders arrive in Roswell, N.M. at the end of the third leg of the journey from California to Indianapolis. Jeric Wilhemsen/The American Legion

American Legion Post 86 in Heber-Overgaard, Ariz.,has a sign next to its front door that names the location as a “Pony Express Station.” That’s only fitting, seeing how we started Day 3 of the 2020 American Legion Pony Express ride there. Last night, my fellow California riders headed home, and my new friend Randy, or “Ratchet,” from the Pat Tillman Post 117, had done his job escorting me through the Salt River Canyon was well on his way back to Phoenix.

Today I was joined by two new riders, however they were far from new, and it was more like me joining them. Todd Harris and Joe Silva of Post 86 are longtime veterans of the Legacy Run, which had to be canceled this year due to the pandemic. In fact, Todd is part of the advance team and knows the routes backward and forward.

Todd explained to me how the Legacy Ride for The American Legion Legacy Scholarship is about family. Those who return to the ride every year do it as much to see one another as to raise money to help the children of military men and women killed or disabled on active duty since Sept. 11, 2001. And togetherness was the true impetus of this year’s Pony Express Ride. So, bright and early, it was kickstands up and we were off to meet up with the rest of the family.

Todd led the three of us as we rode in a tight pack. I was happy to take the rear, or tailgunner position. Now, instead of making decisions all I had to do was follow the guy in front of me. And that’s what I did for close to 500 miles across Arizona and into New Mexico.

This part of the desert southwest is significantly different from California. Although it is still dry and hot, the feel is much different. Instead of sand and Joshua trees, it’s more cactus and rock. At times there was nothing in sight other than dry shrubs and vast distances. This would quickly change to rolling hills and winding canyons.

When we got deeper into New Mexico, alien culture was definitely present – there were cute alien manikins waving hello as you pass through small towns. At one point, we rode past an array of satellite dishes that I swear I’ve seen in some sci-fi movies.

We stuck primarily to the 60 as we moved east. We passed the northern edge of the White Sands testing grounds. We also went through an area where Billy the Kid used to roam. I never knew about the Smokey the Bear Museum in Captain, N.M., but there it was, and judging from the signs, the whole town was proud of it.

Just before Soccoro, we had a little incident. It was a long stretch of road, and we were quickly approaching two vehicles. A semi truck in front and a pick-up towing a trailer with a car behind. We pulled up behind them, as they were both moving slow. When the center lines allowed for passing, we made our move. As Todd was in the oncoming lane passing the pick-up, with Joe and I close behind, the pick-up truck swerved out to make its pass. Apparently the driver was totally unaware we were even there. Todd had to swerve and speed up, while Joe and I hit the brakes. Fortunately, we made it through safely, but I remember looking at the driver as I passed and seeing her chatting on her phone as if nothing ever happened. So I’m going to take this opportunity to remind everyone – please watch out for motorcycles on the road.

It wasn’t until around 6:30 p.m. when we finally pulled into Roswell. Our first destination was the American Legion post, but alas, it was closed. So instead we checked into our hotel and went over to the Mexican restaurant next door, which had a live band on the patio. I’ll admit the mood was a bit tense, or maybe we were just hangry after a long hot day on our bikes. But after a couple margaritas we were finally able to unwind a bit and listen to the band, who we affectionately dubbed “Out of Tune.”

The 2,300-mile Pony Express Ride, which began in Hollywood, is on its way to American Legion National Headquarters in Indianapolis where participants will deliver checks for The American Legion Legacy Scholarship Fund to National Commander James W. “Bill” Oxford Tuesday, Oct. 13, at 10:45 a.m.