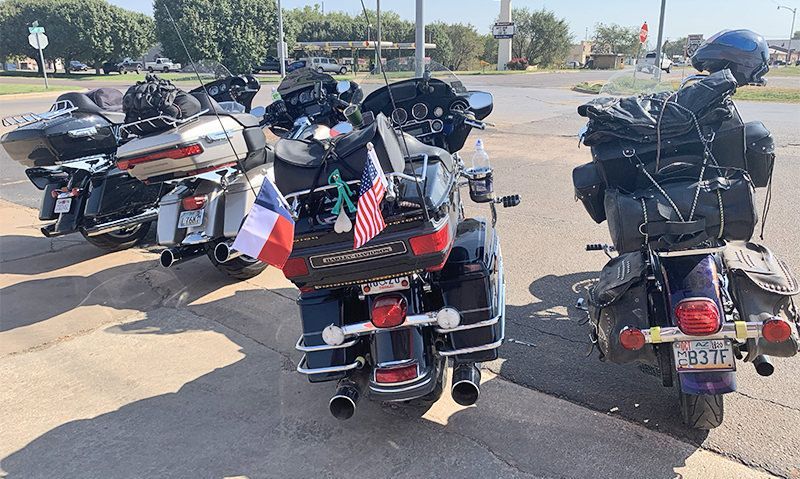 Well, I thought Friday was a long ride. Then there was Saturday. If you’ve ever driven across Texas, you know it can be a multi-day challenge. Fortunately, we only had to cut across the panhandle into the beautiful state of Oklahoma. Still, it was a long time in the saddle, but well worth it as we picked up more riders.

It was bright and early when my two compadres, Todd Harris and Joe Silva of Post 86 in Heber-Overgaard, Ariz., and I left our hotel in Roswell, N.M. We rolled out of alien country – didn’t see any real ones – but we soaked in plenty of unusual landscape along the way.

Normally, when a group takes off like this in the morning the first thing to do is fuel up. But as we were leaving town and pulled into the last gas station, it was full of cars. So we made an impromptu decision and decided to ride anyway and get gas somewhere else down the road. About 50 miles down the road, the place we found on the map to stop was a ghost town. Running on fumes, we did some calculations with the possibility of depending on our reserve tanks, and continued on. Luckily, we made it to the next town without having to push our bikes.

Up until now, the 2,300-mile Pony Express Ride has had just three or four riders at a time. But today, we added more. Waiting for us in Silverton, Texas, were two riders and a couple old buddies of mine, Scooter and KNine. I met Scooter on The American Legion Centennial Ride last summer to celebrate the 100th anniversary of The American Legion along The American Legion Highway, which cuts right through the middle of our great country, from Canada to Mexico.

KNine, also known as Mike Judge, belongs to China Post 1, the only American Legion post operating in exile. Consisting of ex-pats, Air America pilots and various other veterans, this post calls its home wherever members can get together.

The five of us continued down the road on our way to Oklahoma City. I was actually surprised when I saw the sign saying "Welcome to Oklahoma." I thought to myself, “How did we make it through Texas so quickly?” You could immediately tell we were in a different region, riding through the rolling hills and trees just starting to show their fall colors.

Before too long, we finally arrived at our final destination for the day, a hotel on the outer edge of Oklahoma City where we were supposed to meet our fellow riders from Texas and Oklahoma. As soon as we pulled into the parking lot, there they were – old friends and riders ready to greet us. It was like a family reunion. Shaking hands and hugging old buddies from rides past.

After shooting the bull for a while and drinking a couple beers, we headed over to the local post for a safety briefing. On Sunday we will be headed to St. Roberts, Mo., where we’ll meet even more riders to take us on to our final destination, Indianapolis, home of The American Legion National Headquarters where we will be able to present our checks for the Legacy Scholarship Fund to National Commander James W. “Bill” Oxford Tuesday morning at 10:45.

Reminder: donations to The American Legion Legacy Scholarship made between now and Dec. 31 still apply to the 15th Legacy Run, which is being conducted in different ways throughout the country this year due to the coronavirus pandemic. To make a donation, visit www.legion.org/riders/legacyrun/donation. The scholarship provides assistance to the children of military personnel who lost their lives on or after Sept. 11, 2001, or became 50 percent or greater disabled according to VA ratings.