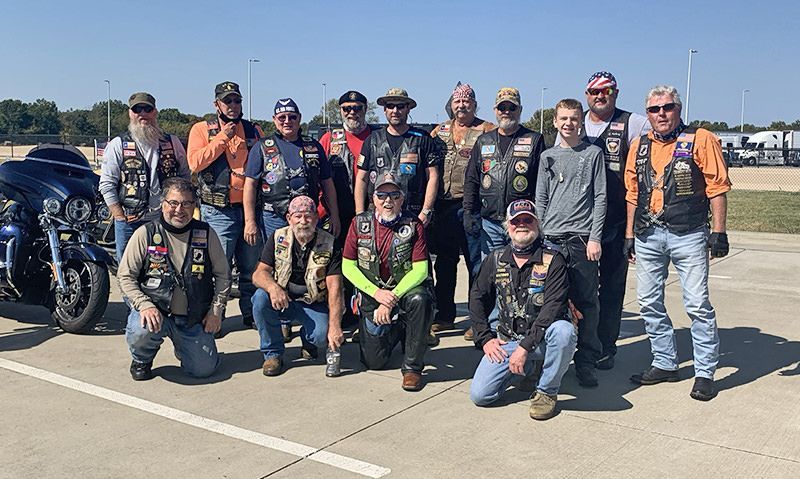 I can’t remember the last time I’ve ever been truly impressed with a meal, but I’m pretty sure it never was a hotel breakfast until now. Seeing how the group wasn’t departing until 9 a.m. Sunday, I had one of those rare opportunities to take my time this particular morning. And what a great decision that was. Normally what you would expect from a hotel breakfast is some microwaved omelets, maybe a banana, and if you’re lucky a little box of cereal. But at the Best Western Saddleback Inn, the food was spectacular and the service even better. Fluffy scrambled eggs, bacon cooked just right, fresh biscuits and gravy. And the serving size was well more than I could handle. The coffee even made me say, “Wow!” out loud.

With a full belly I headed outside for our safety briefing. We are now a larger group, 14 riders strong as we pulled out and onto the open road. With riders in front and behind me in formation, I really had to concentrate on staying disciplined as we rode in a staggered formation. My actions affect the safety of not only myself, but the other riders around me. So, I was focused as we pulled out of town. I concentrated on the rider in front of me and to my side. I maintained my intervals and passed back hand signals. This was a true group ride.

As we rode up Interstate 44, also known as the Will Rogers Turnpike, our first major challenge was toll booths. Most of the riders, especially those from the area, had fast passes that allowed them to roll on through the toll booths. A few of us did not and had to break off from the group and pay cash. Those who ride motorcycles understand it’s not easy to pull out your wallet and money when riding a bike. Our hands are on the clutch and throttle most of the time, and releasing the clutch and finding neutral on some motorcycles can be challenging. I actually had to turn off my bike as I went through so that I could access my money. Then we had to catch up to the group. But we made it through and caught up. Now, however, I was in the back.

The second toll booth I was a bit more prepared and made it through without trouble. And by the time I caught the group they had arrived at our lunch stop. It was a place everyone referred to as the Oasis. Basically a McDonalds in an archway over the freeway. And at that point, we gained a few more riders from the Department of Kansas.

The new group continued on to our final destination of the day, St. Roberts, Mo., just outside of Fort Leonard Wood. As we rolled into town, the rider next to me, Mark Meysembourg of Texas and now a close friend, leaned over and said, “I went to basic here back in ’79.”

We checked into our hotel, and after a few minutes to unload we headed over to the local post for a reception. William C. Anderson Post 331 was named after a World War II POW who survived the Bataan death march but died four years later when a Japanese POW ship he was on sank. The leadership at the post welcomed us with open arms and treated us to a great taco dinner. A few of their riders will be joining us for the final leg of our 2,300-mile voyage to deliver donations collected for The American Legion Legacy Scholarship Fund, which provides scholarships for the children of military men and women who died or became over 50 percent disabled while on active duty since 9/11.

After a good time at the post, I headed back to my room to write this dispatch and watch the NBA finals where my hometown team, the LA Lakers, were well on their way to winning the championship. Soon, I got a call from Todd Harris, my compadre I’d been riding with since Heber-Overgaard, Ariz.; he told me to come outside. I did, and joined a group of a half dozen riders gathered in a circle having drinks and yukking it up.

They had something they wanted to tell me which basically boiled down to this. To paraphrase, they’d seen me posting my videos and calling for donations to the Legacy Scholarship Fund, which was all fine and good. But that wasn’t the only reason they were here. Of course, raising money for the fund is the primary mission. But what really brings these riders together year after year is family. These guys and gals come back time after time not only to ride with each other, but to be together, among like-minded individuals who share a common experience.

The conversations revolved around past rides with statements like, “Remember the rain in Hutchinson, Kan.?” They talked about “the best stop of all time” and how you receive your road name. And that’s when they looked at me and started voting on what my road name would be. A few obvious ones were thrown out like “Hollywood” or “Snapshot.” But the decision wouldn’t be made until after our ride Monday. And they will be watching me. Because as tradition goes, your road name is usually based on a mistake you make, or how you messed up. So Monday, I’ll be on my best behavior.

There’s still time to donate to The American Legion Legacy Scholarship Fund and have it count toward the 15th Legacy Run total. The Legacy Run, operating differently in multiple states and raising funds online, had to be canceled due to the coronavirus pandemic. Donations to help this important cause can be made at www.legion.org/riders/legacyrun/donation.