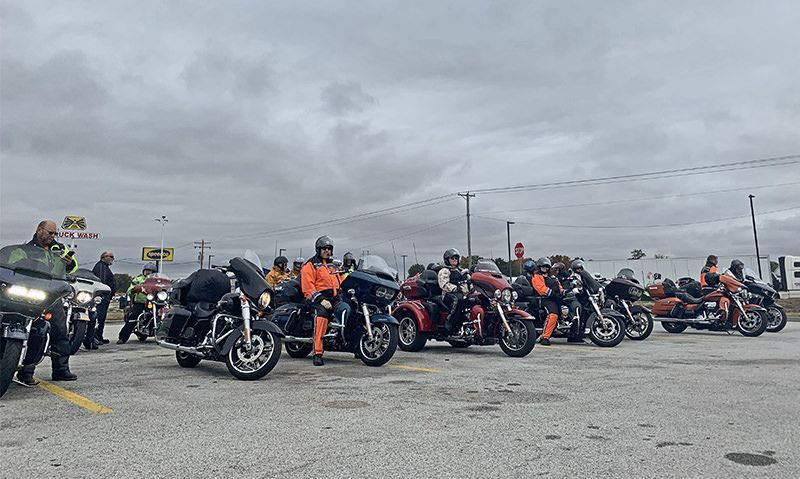 Prior to starting the 2020 American Legion Pony Express Ride, I remember a conversation with Todd Harris of Heber-Overgaard Post 86 in Arizona who would be leading the trip from Arizona to Oklahoma. We were talking about potential weather outcomes, especially considering Tropical Storm Delta was making its way through the Gulf of Mexico. Todd pointed me to a weather forecasting website where we studied Delta’s potential outcomes. After studying the data, we came to the conclusion that if we were lucky, we’d only catch the tail end of it as we entered Illinois. And that’s exactly what happened.

The Pony Express Ride group was growing in numbers. After adding a few riders in St. Roberts, Mo., we were well over 20 bikes by Monday. We all gathered in front of our hotel for our pre-ride morning briefing. When I walked out to load my gear onto my bike, the skies weren’t too bad. I thought we might just make it without incident. But gradually the wind picked up and the skies got a little cloudy. To be on the safe side, everyone put on their rain gear and prepared for the worst. By the time we finished our briefing, a storm system was definitely rolling in. An ominous storm cloud was quickly approaching and had already enveloped half the sky. By the time we finished the prayer, a mini tornado hit the parking lot and rolled right over us. Everyone took cover.

Regardless, we were on a mission and nothing was going to stop us from getting the checks we had been carrying for The American Legion Legacy Scholarship Fund to National Headquarters in Indianapolis.

We jumped on our bikes and rode to get ahead of the storm. We experienced a few sprinkles as we left St. Roberts and headed east on Interstate 44 toward St. Louis. The storm cloud was over us, and I could see its leading edge in the distance. I felt confident we could outpace it. And we did.

By the time we hit our fuel stop just prior to St. Louis the skies we clear. It was a bit warmer, and we were all happy about that. We refueled and hit the road. Our next stop was Effingham, Ill., where we stopped for an hour lunch break. And that’s when everything changed. A few riders and I walked over to a Popeye’s Chicken to grab a meal. There aren’t many Popeye’s in California, so whenever I see one I take the opportunity to grab some red beans and rice … mmm, mmm, good. I got my meal, but because of COVID we of course couldn’t eat inside. So, as I went out the door I noticed the wind had really picked up. I stood under an awning next to a dirty old ice machine and ate my lunch alongside my buddy Mark Meysembourg, a Texas rider. We ate and watched the skies get dark and dismal.

We headed back to the bikes and things weren’t looking good. One of the reasons we had stopped here was to meet up with American Legion Riders Advisory Committee Chairman Mark Clark, who would be joining us and leading the final leg. Once he arrived, the rain had begun. And it didn’t stop.

We quickly got on the road and headed out on Interstate 70 toward Indianapolis. And that’s when it really started to come down. Riding at 70-plus MPH in driving rain alongside semi-trucks is no joke. It’s white-knuckle action at its best. I was 100 percent focused on the road and the riders around me. Wind gusts, wet pavement, poor visibility and road construction made this a ride for the record books. But we persisted, stayed strong and disciplined as we rode through the worst of it. And we made it. Just after 6 p.m. local time, the group pulled into its final stop prior to Indianapolis of Plainfield, Ind.

Tuesday morning a group of battle-tested, road-worn American Legion Riders will travel the last 15 miles to The American Legion National Headquarters in Indianapolis to complete our mission.