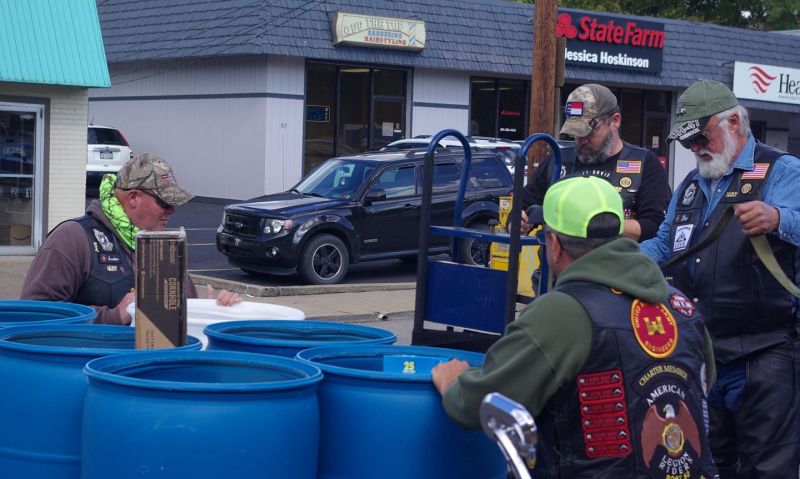 Toward the end of a 26-year career in the U.S. Army Corps of Engineers, Kevin West was stationed in Africa. It was there he received in the mail care packages from members of American Legion Post 52 in Bellaire, Ohio, including Legionnaires John McCloud and John Crolley.

It meant something to West, enough that he vowed “when I was able to return home, that I would remember the ones that were deployed. When I received these packages, I was in a base camp. I’d go to the desert, you’d be gone three to four weeks at a time. I’d come back and I’d have 25 or 30 packages there.

“When you opened them up, we put them out … and everyone that was in our corner of base camp knew that if you’d go through and needed soap, hygiene items or gum, or there were books, magazines. Everything was there and you took what you needed.”

That experience led West, McCloud and Crolley to formally start what just finished up its seventh year in Belmont County. The trio’s Support Our Troops initiative brings veterans service organizations, motorcycle groups and the community together in a collection effort for supplies for local deployed servicemembers.

Since the program’s start “we’ve always known of someone local or someone with a family member (deployed) traced back to Belmont County that we’ve been able to stay in touch with to keep sending these packages,” said West, a past commander of American Legion Post 52 in Bellaire and American Legion Riders Chapter 52’s current assistance director. “We started off sending footlockers. From that time on we started with the large garbage cans. Once there we got hooked with UPS … they said ‘you just bring it in however you want,’ and they’ll box it, they wrap it, they get all the invoices ready, we pay for it and they ship it.”

Chapter 52’s American Legion Riders led delivery of the supplies to The UPS Store in nearby Wheeling, W. Va., where many of them will be sent to soldiers in Kuwait. West’s nephew, U.S. Army Sgt. Robert West Jr., is stationed there and will be one of the many recipients of the goods, as well as help distribute the items to others.

With the nation dealing with a worldwide pandemic, West said he wanted to make sure the U.S. military wasn’t forgotten. “Our (concern) was that because of COVID and all these other mess of problems we’re having in this wonderful nation, we’re forgetting about everyone being deployed,” he said. “I told (my nephew) that we will make sure you have something from home before Veterans Day. And we did.”

West said he hopes Post 52’s effort brings the same feeling to the servicemembers benefitting from it that he got 14 years ago when he received his care packages. “It was a touch of home,” he said. “It was like you were back on the block with your friends and relatives.”