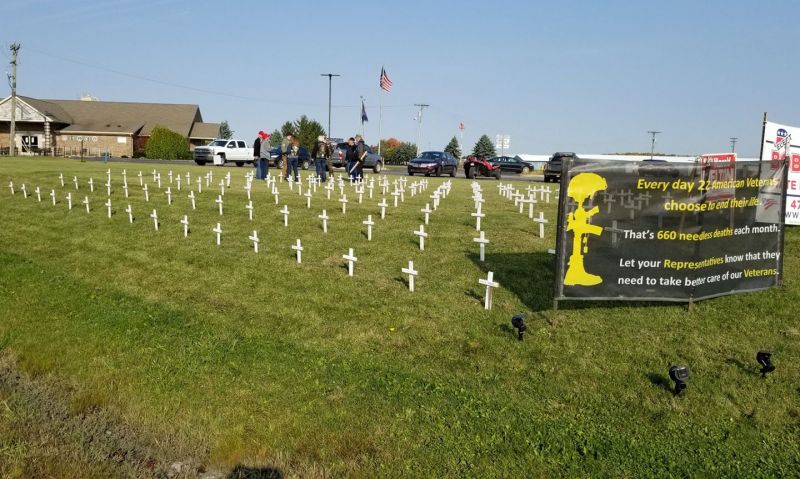 The lawn outside of American Legion Post 141 in Howell, Mich., laid bare until Oct. 3. That’s when Post 141 Legion Riders began putting up 22 white crosses a day – the number of veterans who die by suicide a day nationwide.

The Riders are putting up crosses for 30 days. On the final day, 660 white crosses will adorn the outside of American Legion Post 141.

“Most civilians are not aware of how bad the veteran suicide problem really is,” said Jon Luker, Legion Rider of Post 141. “So people can watch that field of crosses grow and hopefully get an idea from it that there are just way too many veterans losing hope.”

This is the first year for Post 141 to display the crosses. The campaign to bring awareness to the growing rate of veteran suicides through the white crosses was started over five years ago by the founders of the Veterans Refuge Network in Ypsilanti, Mich. When the Veterans Refuge Network stopped displaying the crosses, Luker asked for and received ownership of them.

The crosses were in need of replacement which resulted in Post 141 Legion Riders becoming the “inspiration for bringing (the crosses) to the post,” Luker said.

A youth group at a local church in Howell are helping to rebuild and paint new crosses. It’s there that Legion Riders came to assist the youth when they learned what the crosses were for. “They said, ‘Hey, let’s put these outside of our post,’” Luker said. “So about six of us Legion Riders have now been showing up every morning at 10 a.m. to put out 22 more crosses.”

People driving by the post also will stop to see what the crosses are about and ask to put one up for someone they lost.

A few spotlights shine on the crosses to keep the reminder visible even in the dark.